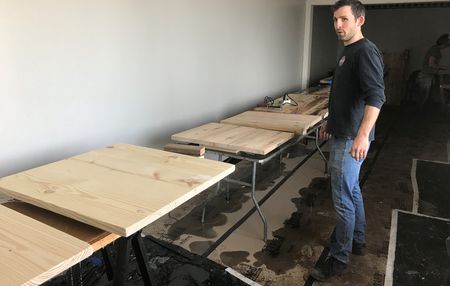 BEDFORD HEIGHTS, Ohio – Danny Callam wants his work to be the base for restaurants’ food and drink offerings – literally.

Callam’s Zuzu Woodworks is banking on a niche part of the culinary industry: He’s making furniture that fits a particular restaurant’s vibe, distinctive pieces rather than pedestrian tables.

With thousands of restaurants in Ohio, not to mention the state’s 600-plus wineries and breweries that constantly seek an ambiance to stand apart from competition, it’s not a bad idea. All this from a guy who started as an accountant and has turned to woodworking full time.

“Woodworking always fascinating me,” Callam said. “I never thought I would do it full time.”

He has started with two clients – Winking Lizard and Barrio Tacos. He has been sharing a warehouse with Winking Lizard for about five months. Full disclosure: One of the restaurant’s owners, Jim Callam, is his father.

“I’m blessed with Winking Lizard and Barrio,” he said. “They’re willing to spend money rather than buying cheap. This is my jumping-off point where I was kind of deciding ‘Do I make this leap?’ and once I got these orders I was full steam ahead.”

His mom Maureen helps out, as does his brother Matt. On a recent day he was working on assorted tables – 32 by 32 inches, and 24 by 32 inches – maneuvering between a large planer, sander and joiner, stepping around bar clamps holding glued pieces on the floor. With so many pieces being built, stained, glued and finished, his office has been temporarily converted into a storage room.

His creative canvas extends as far as his imagination in the Bedford Heights warehouse, sitting snugly near Interstate 271 and U.S. 422. He has pieces from a California redwood. Sliced chunks of trees will form live-edge pieces, which always seem to stand out as tables and tasting bars and make a room come alive. He also picked up some monstrous-sized posts that came from under a bridge in what was once an old lumber yard in the Flats West Bank. Eventually they will become tables and custom shelving.

Zazu Woodworks specializes in making tables and other pieces for restaurants.

“I didn’t want to just cut them … and have wasted wood,” Callam said. “I use everything.”

Prepping the posts takes diligent patience: Hundreds of bent nails have to be dealt with. Some jut out, some are embedded to the nailhead.

“We’ve been collecting buckets full of them,” he said. “I might get them melted into something like a doorstop.”

He respects the link between old functions and modern uses.

His business kicked into gear when the folks at Barrio told him” ‘Hey give me a prototype. I want a table that won’t have to be repainted every year. I mean, they just get beaten up.’ ” So he started working at night on what began as a side gig.

He builds his Barrio tables from pine, and paints and epoxies them.

As he worked on projects, his love of the craft grew. He made 8-foot by 8-foot custom coat-rack benches. He creates tabletops and bar tops, and wants to do outdoor seating and display walls. Cutting boards and coasters also are in the works, he said.

It’s all an ambitious business plan for a guy who came at woodworking late.

Callam, 30, was raised in South Euclid, attended University School, and has an accounting degree from the University of Dayton. But his heart wasn’t in his intended field.

“I just needed a degree,” he said. “I was flip-flopping. I had no idea what I wanted to do.”

He was working an accounting internship and, while the platoon of numbers stared at him, line after line, he noticed something about the people around him.

“They all did not look happy – ever,” he said. That brought on self-introspection, of coming to the realization that “I don’t want to be that person, looking on 20 years from now. Why don’t I try something new? … Why am I doing this? It was almost a coming-to-Jesus moment: ‘This isn’t right. I’m not comfortable with this.’ “

So he did something about it.

After a stint working in Florida he returned home and landed a job at Borrow Curated Furniture and Design in Cleveland. As vice president of operations for the furniture-rental company, where he worked for four years, he was exposed to all sorts of facets about the job, and he soaked it all up.

“While I was there we started getting into in-house projects, whether it was carpentry or upholstery. I actually took two upholstery classes, and I made seven or eight pieces – reupholstered chairs, couches, several cushions.” 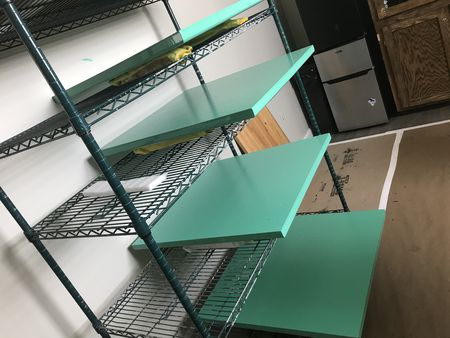 These tabletops eventually will be in Barrio Tacos.

He added: “I was super blessed with that, because otherwise I don’t know if I would be doing this because I didn’t have any exposure to it. This gives me more freedom with what I want to do. Woodworking interested me. I was doing side projects for friends, family, making a little money, but it wasn’t about the money. It was about getting exposed to it.

“A lot has changed in the last year. I’ll say I have never been so exhausted but yet so motivated in my life. I would never wake up early, and now I’m an early riser. I don’t need my alarm.”

His father – whom Callam calls his toughest critic – tried to instill a proper attitude from the start.

“It’s funny growing up, working here ever summer, my dad would not let me sit around the house, ever,” he said. “Two days off school – ‘What are you doing?’ ‘Watching TV.’ Nope. He’s off to work. It helped my work ethic. Working in restaurants isn’t easy. You’ve got to hustle, and you deal with difficult people.”

The folks around him – knowing who his dad was – just saw him as the guy who would eventually take over the business.

He is in the business – sort of – as he makes their tables and shelves and other pieces. 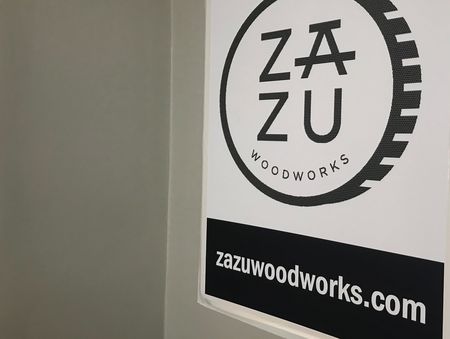 Zazu Woodworks is in Bedford Heights.

It’s also funny how he named his business.

A longtime pal made up nicknames, and he kept calling Callam ‘Zazu.’

“He would do it with everyone,” he said. “A month or two later he’s calling everyone by their nicknames. There’s no real fun story. I told him ‘How did you think of this?’ He said ‘I have no idea.’ “

So one day Callam researched the name and found ‘zazu’ means ‘movement’ as a Hebrew name. And that, he said, is funny because “I always have to be doing something. … I can’t sit down, whether it’s working here or fixing something at the house.”

He hopes all that movement pays off with other restaurant and bar clients wanting pieces that reflect their businesses.

“It’s definitely rewarding seeing your product – ‘Oh, this table, this bar I am drinking at – it’s mine. It was at the shop; now it’s being used here,” he said. “It’s surreal.”

How are baseball bats made? Phoenix Bats marks 20-plus years in business (photos, video)

I am on cleveland.com’s life and culture team and cover food, beer, wine and sports-related topics. If you want to see my stories, here’s a directory on cleveland.com. Bill Wills of WTAM-1100 and I talk food and drink usually at 8:20 a.m. Thursday morning. And tune in at 7:05 a.m. Wednesdays for “Beer with Bona and Much, Much More” with Munch Bishop on 1350-AM The Gambler. Twitter: @mbona30.

Get a jumpstart on the weekend and sign up for Cleveland.com’s weekly “In the CLE” email newsletter, your essential guide to the top things to do in Greater Cleveland. It will arrive in your inbox on Friday mornings – an exclusive to-do list, focusing on the best of the weekend fun. Restaurants, music, movies, performing arts, family fun and more. Just click here to subscribe. All cleveland.com newsletters are free.