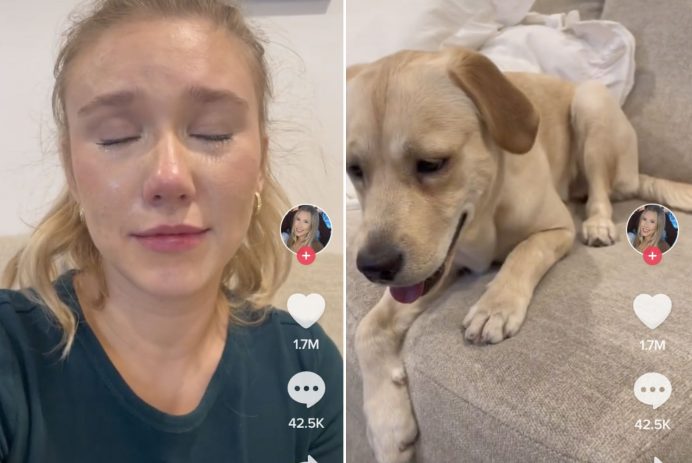 We love our pets, but sometimes they can behave like mischievous little children. Innocent as they are, they can get up to some naughty things.

TikToker @kimkruk posted a video after her Labrador Retriever left her in tears. The dog couldn’t have been more oblivious to the aftermath of what it had done. But the pet owner felt the effects nonetheless.

She left her Labrador alone for two hours, and the dog managed to get ahold of the pile of cash left on top of the table.

The canine ate more than $2,000 in bills. The bits of chewed money were scattered everywhere in the living room. It made perfect sense that @kimkruk was crying.

“Who wants her LMAO,” she joked in the caption.

“Collect all the pieces take them to the bank and explain the situation. They should be able to help,” someone commented.

“That dog is a legend,” another wrote.

“I know it is frustrating but your dog is priceless and loves you!” a user said.

In an update, she explained that the reason there was so much cash on the table was that her husband works in construction. He worked all weekend doing a side gig and was paid $2,700 cash.

The dog spared them about $300 after all was said and done. With the advice from the comments, she and her husband are taping up whatever they can and trying to get it replaced at the bank.

The post Wife cries after dog eats over $2,000 in cash appeared first on In The Know.

More from In The Know:

Man ‘patiently waits’ to propose while girlfriend gets distracted by pumpkins

Logan Paul finally met his doppelgänger for the first time: ‘This was weird’

Why is everyone saying ‘It’s a chicken salad’ on TikTok?

You won’t need cookie cutters for these sweet treats