When I started my career, it was a major faux pas for employees to discuss goals outside of their current position at work. But now as a CEO, I kind of dig it.

Some of my employees have startup dreams of their own—and that’s a good thing. Not only do I willingly pass on my entrepreneurial knowledge to them, but I also often ask to invest when they raise their first seed round.

The employment game has changed. Moving to hybrid work increased demand for flexibility. At the same time, the gig economy is on the rise—one in three U.S. workers have a side hustle. People’s priorities are shifting. We’re awakening to our core values and reevaluating how we want to spend our time. As such, employers who want to remain competitive in the talent war, can no longer expect to own 100 percent of their employees’ focus or time.

Allowing side hustles, considering flexible work schedules and enabling job sharing not only increase workers’ quality of life, but they can also benefit an organization’s overall performance.

Related The Importance of Onboarding: A Guide to Ensuring Your New Employees Succeed—and Stick Around

How We Compensate Employees Needs to Change

The punch card was grandfathered-in from the factory era. Time put in equaled compensation paid. But work has evolved—and so has our ability to measure productivity, output and job performance. As we start an era where employees are receiving multiple offers, we need to adapt to models that allow them to enterprise.

When much of the world went remote in the early lockdown, some people were shocked to see that productivity actually increased. Personally, I’m not surprised. Though it might seem counterintuitive, having your team work outside your office can strengthen what they do inside.

First, it’s critical to get clear about output expectations. Each role at our company has core responsibilities and concrete goals. Every week, each member of our team is responsible for measuring their success on a scorecard. If you’re hitting 80 percent of your goals, you’re performing well. Once it’s made crystal clear what the definition of success is, things like work hours become less critical.

But it’s also important to be accountable to your team beyond their role within your company.

In fact, one of the big drivers of the current wave of resignations is a desire for growth. One study found 66 percent of people leaving their jobs wanted better opportunities and 54 percent said their current employers didn’t take their aspirations seriously. People want to develop their skills and progress throughout their careers.

As employers, we must communicate clearly with our teams and give them the tools for success—both within and outside of our companies.

Related What Impacts Employee Happiness in 2021? 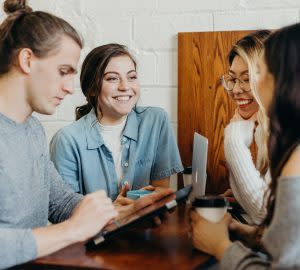 The Benefit of Supporting Employee Side Hustles

We spend most of our waking hours at work, but there’s a lot more to a person than how they earn a paycheck. I’ve always been good at connecting the dots. So, I don’t see my employees’ side hustles as a threat. Instead, I think of them as valuable off-the-job training.

We ask our employees to bring their whole selves to work and that should include their side projects, too. Whether they’re doing consulting, contracting or slinging stuff on Shopify, they’re learning skills that reinforce their day job.

Once people have gotten clear about their career goals and ambitions, I’ve found it rewarding to serve as a de facto board member or accountability coach.

Not only can they help me continue to build and run our business, but I can help the next generation of entrepreneurs and business leaders build theirs. The independence is a great motivator too—both flexibility and autonomy are linked to greater job satisfaction.

As a leader, I take it as a good sign when people are motivated to constantly learn and push themselves to new levels. It’s time we recognize that our employees’ side hustles make them better workers.

Related Don’t Shut Down the Side Hustle: How Employers Can Use That Ambition to Their Benefit 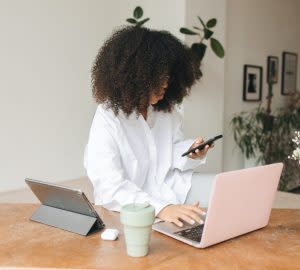 We all have our own personal algorithm of what makes us happy. Particularly during the pandemic, we’ve learned what fills us up and what our deal-breakers are. For many of us, just getting paid is no longer enough.

Feeling disconnected from their purpose is driving workers to quit. Gen Z, in particular, wants to work for employers who are ethical, invested in DE&I and care about their wellbeing.

Our motivation at work comes from two different channels: extrinsic and intrinsic. Extrinsic motivators are things like reward and punishment—you work for pay, you’re punctual to avoid an angry reaction. But in contrast, intrinsic motivation is within our control—we do it because the action itself is rewarding.

Side hustles can tick some employees’ motivational boxes and make them feel more fulfilled. But there are other ways to keep people connected and engaged.

Mentorship, for instance, is a great way to get people more invested. Leading others and sharing what you’ve learned is a motivator within its own right. I think of it as charging your heart battery—where you feel abundant like anything’s possible.

After the hardships of the past two years, people want to take pride and find meaning in what they do. For years, businesses have taken a one-size-fits-all approach to employment. But the reality is, we all have a different equation to feel content at work.

As an entrepreneur, I’ve been lucky to have mentors who’ve been through it and are willing to warn me about the speed bumps ahead. Now, I’m trying to pay it forward for my employees.

They may or may not want to be entrepreneurs. But with so many people calling it quits, it’s time for employers to create a work environment that rewards the same principles of entrepreneurship: autonomy, creative thinking and leadership.

Mike Stephenson is cofounder and CEO of addy, which is focused on making real estate investing accessible to everyone.

The post Want Happier Employees? Let Them Be Their Own Boss appeared first on Worth.