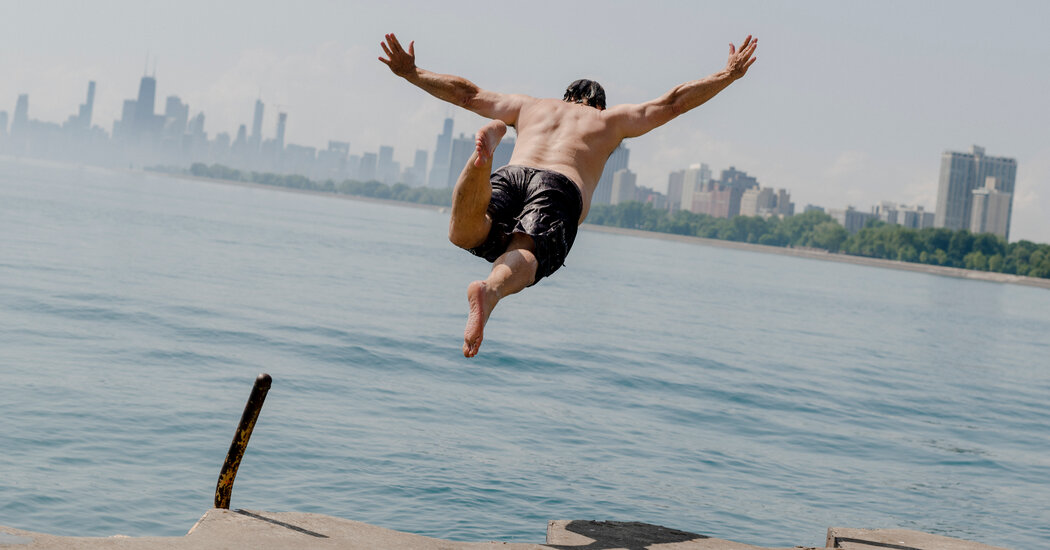 CHICAGO — One Saturday last June, Dan O’Conor began his day in a prickly and painful state. He was anxious from the coronavirus pandemic, troubled by American politics and, on this particular morning after celebrating his son’s high school graduation with neighbors and a few tumblers of bourbon, spectacularly hung over.

Fed up with his whingeing, his wife, Margaret, ordered him out of the house. He climbed on his bike and rode three miles east to Lake Michigan, where he could see the skyline of downtown Chicago shimmering to the south.

Mr. O’Conor stood on the lip of concrete at the edge of the lake, where the water below was maybe 15 feet deep and a bracing 50 degrees. His head throbbed. He jumped.

“It felt so good,” he said. “I just wanted to block it all out, the pandemic, everything.”

This is the story of a 53-year-old man who has jumped into Lake Michigan every day for nearly a year. Mr. O’Conor’s jumps have followed the complete arc of Chicago’s seasons, from the gloriously warm to the punishingly frigid and back again. And they have nearly traced the pandemic, too, from its early months till its waning days in the Midwest.

The daily jump began as a private ritual, a way to escape the demoralizing news of the day, get a little exercise and cheer himself up with a bike ride and the splendor of the lake.

One year later, it has become something else entirely.

What was once a solitary morning dip in the lake now attracts a regular crew of spectators: family members, friends, casual acquaintances, fishermen and, on some days, a pair of chatty women from Poland who stop by on their daily stroll.

The jump is a musical performance, too, ever since Mr. O’Conor began inviting local bands — many of them out of work because of the pandemic — to serenade him as he leaps into Lake Michigan.

And there are thousands of online watchers: Mr. O’Conor posts a short clip of his daily jump on Twitter and Instagram.

That was where I first glimpsed Mr. O’Conor, who posts under @TheRealDtox, a nod to his side gig making stenciled rock T-shirts, which he sold at Lollapalooza and other festivals in the days before Covid.

Last fall, I was in the middle of a year of reporting that was focused on the pandemic’s human toll. After interviewing people who lost spouses, relatives and friends, emotional conversations that could stretch for hours, sometimes I would decompress by lying on the rug in my home office, taking a few minutes with my spine pressed to the floor. Other times I would log on to Twitter and watch a man I had never met flop into Lake Michigan.

It turns out plenty of other people shared this tiny pandemic escape.

“All of us were sitting at home, bored and scared and unsure of what’s going on in the world,” said Bob Farster, a real estate agent who is a neighbor of Mr. O’Conor’s. “And here’s this guy with a weird mustache who keeps jumping in the lake and he’s having a blast doing it every single day.”

After the first morning’s jump, Mr. O’Conor came back the next day, and the day after that. Somewhere around the fourth day, he posted a picture on social media. About a month later, a friend asked him if he was still jumping in the lake.

“During the pandemic, it was a sort of light,” he said. “Everything was so dark with the pandemic and the protests and politics. Then people were like, how long are you going to do it? What are you doing it for?”

Mr. O’Conor did not know how long he would keep jumping, or even particularly why he kept jumping, morning after morning. But there was something about the whole endeavor that appealed to his big, obsessive personality and his appreciation for routines. Before the pandemic, Mr. O’Conor, a stocky, gregarious former advertising executive for Spin magazine with unruly hair, attended music festivals and shows at least twice a week — and took a small notebook where he wrote down every song that the bands played. There is a plastic bin crammed full of notebooks in his garage.

In times of great stress like the pandemic, rituals can take on a heightened importance. In March 2020, New Yorkers leaned out of apartment windows, clapping for health care workers each night at 7 p.m. sharp. Other people, jittery at home, baked bread daily, scheduled a Zoom call with their families every Sunday, or went for a walk at the same time each evening.

The daily jump was slowly becoming Mr. O’Conor’s own way through the pandemic.

During the winter, there were days he could not really jump at all: When Lake Michigan was covered with snow and ice, he had to break through with a shovel to find a place to carefully drop into the lake, then climb out again. A woman interrupted him at the water’s edge once, concerned about his mental health.

“Are you trying to kill yourself?” she asked.

“No, I’m just jumping in and getting out,” he replied.

Steve Reidell, a musician in Chicago, played with a band during one of Mr. O’Conor’s particularly icy mornings. To get to the water’s edge, the band pulled a portable amp on a cheap plastic sled.

“I was like, ‘Do I want to play a show outside in the winter, even if it’s just one song?’” he said. “But I was pretty moved by what he was doing.”

Some people found it infectious, diverting, even inspiring. Others wondered if he had gone crazy.

“I never got this straight-up from people,” said his wife, who runs a food pantry in Chicago. “But people who have a penchant toward not being risk takers would give me a ‘How can you let your husband do this?’ kind of thing. But you’re with somebody for 30 years, you tend to get to know them. I’m not going to be able to tell him not to do it.”

One of Mr. O’Conor’s jobs is driving a paratransit bus in the northern suburbs of Chicago, taking people with health issues or disabilities to their appointments from early afternoon until late evening — work that allowed him the time to do the jump each morning.

A few months in, a local media outlet, Block Club Chicago, caught wind of his jumps, amplifying the attention from friends and acquaintances.

One friend who was going through personal problems began coming to the lake for the jumps, just to start his day on a lighter note and get his mind off the negative. Mr. O’Conor, an extremely social person before the pandemic, found that because of the jumps, he was renewing old friendships, making new ones and getting notes from people he had not heard from in 20 years.

Elaine Melko, a photographer who knew Mr. O’Conor as a fellow parent at youth baseball games, has found herself drawn to the lake with her camera, in part for the chance to socialize a little.

“It’s almost been like a bar without drinks,” she said. “Getting together by the lake and having a little conversation, and then everyone has to go home.”

Last week, Mr. O’Conor arrived at his usual spot at 10:30 a.m., wearing a long robe — a thrift-shop find originally from the Kohler spa in Wisconsin — he had stenciled with the words “Great Lake Jumper.” The sun was intense; a few people sat around talking as Tim Midyett, a local musician, warmed up on the guitar.

“I haven’t played in front of anybody since January 2020,” he said.

Mr. O’Conor prepared for his jump. There is nothing elegant or artful about his technique. He does not swan dive or cleanly disappear into the water. He plunges, messily. Sometimes he executes a solid, and fairly impressive, back flip.

He was still cheery as he emerged, dripping, from the water, and insisted on doing another couple of tries before he left.

“Refreshing,” he said of the water. “Takes your breath away.”

Serendipity is guiding the end of his yearlong quest: On Friday, Chicago will become one of the biggest cities in the country to fully reopen, with the lifting of pandemic restrictions and capacity rules in restaurants, bars and Mr. O’Conor’s beloved live-music venues.

He has something big planned for Saturday, a grand finale by the lake on the 365th day. There will be surprise guest musicians, pulled pork sandwiches, veggie burgers and popcorn. Mr. O’Conor does not know how many people will show up. But he is expecting that at least some of them will jump in.