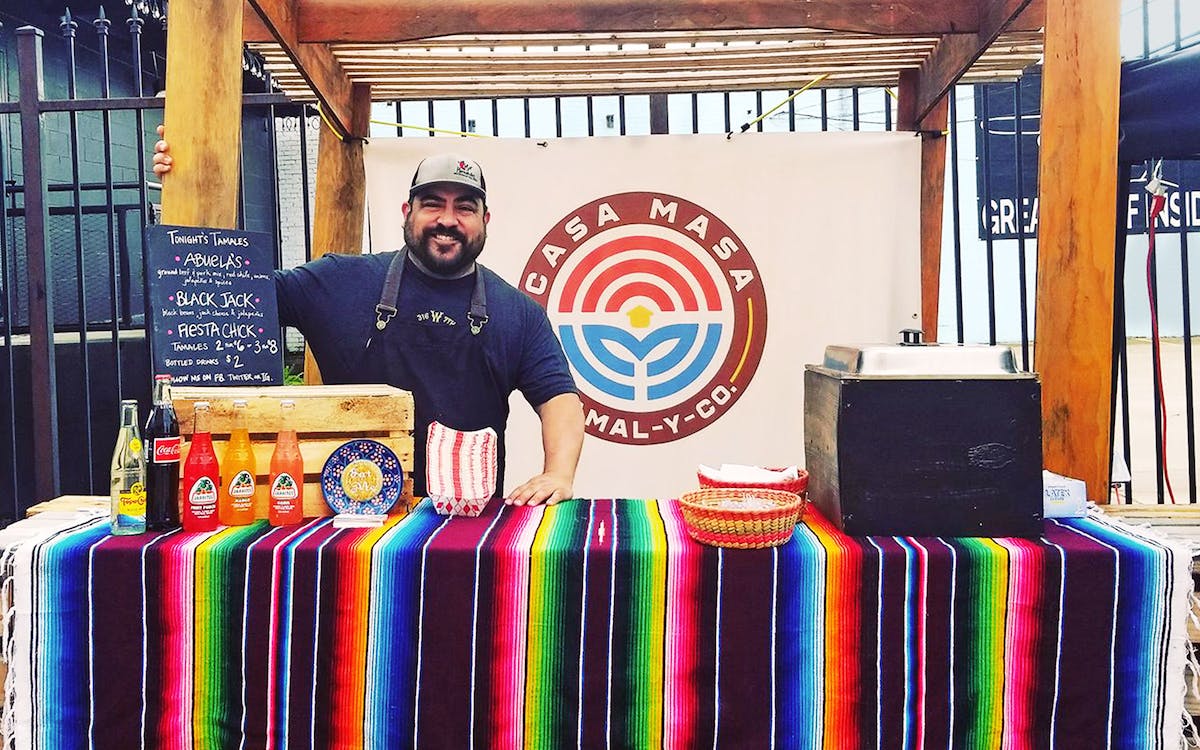 The first time I met John Hernandez was in the parking lot of the Double Wide Honky-Tonk on the eastern outskirts of Dallas’ Deep Ellum neighborhood. It was the fall of 2017 and the waterhole was hosting a market of grocery vendors as a fundraiser for the victims of Hurricane Maria in Puerto Rico as well as those who suffered after the earthquake in the Puebla area of ​​Mexico. Hernandez served his tamales from the window of an Airstream trailer. A year earlier he had founded his pop-up tamale company Casa Masa as a side concert and creative outlet while juggling other jobs in the restaurant industry. If the eager line of customers showed it, business was good. More than three years later, his success is “incredible,” he says.

I don’t think it’s hard to believe: I fondly remember my first taste of Casa Masa Abuela beef and pork tamal (the unique form of tamales in Spanish). It was slightly sweet, with a subtle, rapid heat. The recipe, Hernandez explained, was his grandmother’s traditional picadillo mix with chilli and herbs. Another tamale was stuffed with milky quesillo cheese and thin ribbons of toasted jalapeño and poblanos, while a third contained an assortment of fall vegetables and vegetables. The spice levels varied, but all were pleasant. The most affable gentleman was as anxious to squat tamales as he was to chat. Yes, he makes every tamale by hand without any help. And yes, he learned from his mother and Abuelita. In Mexican-American communities, most tamaleras (tamal makers) are women; Hernandez is a rare Tamalero.

He says he absorbed the skills through osmosis. Hernandez grew up in El Campo, about an hour southwest of Houston, where his family owned a nursery and landscaping in their home. As the youngest of five children, Hernandez didn’t have much time to himself. “Either I quarreled with my brothers or they chose me,” he explains. He took refuge by being with his mother and grandmother while they made tamales. This was done a block away in Hernandez’s grandmother’s house. It was nicer inside at Abuela Emilia, says Hernandez, especially on hot days. The older women kept cooking together. At first he ate more than he cooked as he sat in the kitchen while they made tamales. But the more time he spent there, the more tasks he was given.

“It was really comforting to mix the masa and spread it in the corn bowl,” he says, adding with a laugh that it was cooler inside too, especially in summer. He was also introduced to the chisme factor (gossip) of tamal production. Perhaps as important as the food itself are the stories that families tell Tamaladasor tamale-making parties. As is known, these take place at Christmas, but can also take place throughout the year. For Hernandez’s relatives, the gatherings were an important part of their social calendar. “With the little Spanish I knew, I would find out if they were talking about someone,” he laughs.

When he was nine years old, his family opened their own Tex-Mex restaurant, Casa Hernandez, in 1983. As a small child, he took a nap under the tables and later did his homework there. The restaurant is family-owned and run by one of the Hernandez brothers. The name for Hernandez’s tamales pop-up pays homage to his parents’ restaurant and to all the Tex-Mex restaurants of the 1980s, whose names are composed of the word “Casa” and the owner’s last name. When it came time to christen his own grocery business, Hernandez said there was only one contender: “It couldn’t be anything other than Casa Masa.”

Breweries and restaurants were among those hosting Hernandez’s early pop-ups. You remain his supporters. He has found steady success with a regular list of tamales including the Abuela’s, Queso, and Rajas, and the Virtuous Veggie, as well as the regular red and green chicken and pork, all of which were handcrafted by Hernandez. “I have to mix it with my hands. I can’t use a blender. I need to feel when it’s done, ”he told me over a Zoom call that was interrupted by his frequent laughter. Spoken like a real Tamalero.

A plate of Abuela’s tamales.

That doesn’t mean there weren’t any skeptics. A man selling tamales is still shocking to some, and Hernandez reports that he’s the subject of countless double-tapes. The first was on its first pop-up at a Lions Club farmers market outside a church on tree-lined Tenth Street in Oak Cliff. An elderly woman walked to his table with her arms crossed and a sour, suspicious look. In Spanish, she peppered Hernandez with questions about the tamales. His first answers were in English. “I think that upset her more,” chuckles Hernandez. The Viejita (old woman) would not be satisfied.

Finally, Hernandez answered in decent Spanish. She asked who made the tamales. The Tamalero replied that he had. The woman was confused. “But why is it called your Abuela?” She asked. “I said, ‘Well, it’s her recipe, but I made it.’” He doesn’t usually hand out samples, but that day he made an exception. “Look here, just eat this,” he instructed her with an outstretched hand. A slight smile formed on her wrinkled face. “Ay mijo, these are really good ones,” remembers Hernandez approvingly. He’s had similar experiences with other Viejitas on other days, and a bite of his kitchen usually converts them.

The process of making tamales is a dying art. The culinary matriarchs are dying, and most Texans are not ready for the tedious, time-consuming preparation that a large tamale requires. There are only so many people out there who can fulfill assignments, and once you find a coveted tamales hookup, guard it carefully. Someone has to continue the tradition. In Dallas, one of those people is John Hernandez.

Hernandez takes pre-orders via Instagram and Facebook for Saturday pick-ups Encina (formerly Bolsa), near the Bishop Arts District. He sells tamales to Thunderbird Station, a new bar in Deep Ellum, for their Tamale Tuesday specials. He turns every other Saturday Peticolas Brewing Company in the Dallas Design District to feed contestants on the brewery’s fun runs but it lingers after the last person crosses the finish line because people decided to pre-order his gigs there. He’ll be there this Saturday before the Super Bowl.

Hernandez often performs at local festivals as well, including Latina CocoAndré Chocolatier & Horchateria. At a CocoAndré event, my family and I ate our way through all kinds of Tamandez by Hernandez. My favorite Casa Masa Tamal? Of course the Abuela. After that, it becomes difficult to choose. The beautiful TX Star – a red colored bag made of smoky piece of fat breast rubbed with ancho chilli – is barely a second. The eye-catching Pork Phat is a cream-colored masa casing filled with green chilli pork. The sides of the ridges of the corn husk have a grassy hue. The black jack aroma mixes soft black beans with creamy quesillo. Tamales are great. These are among the best.