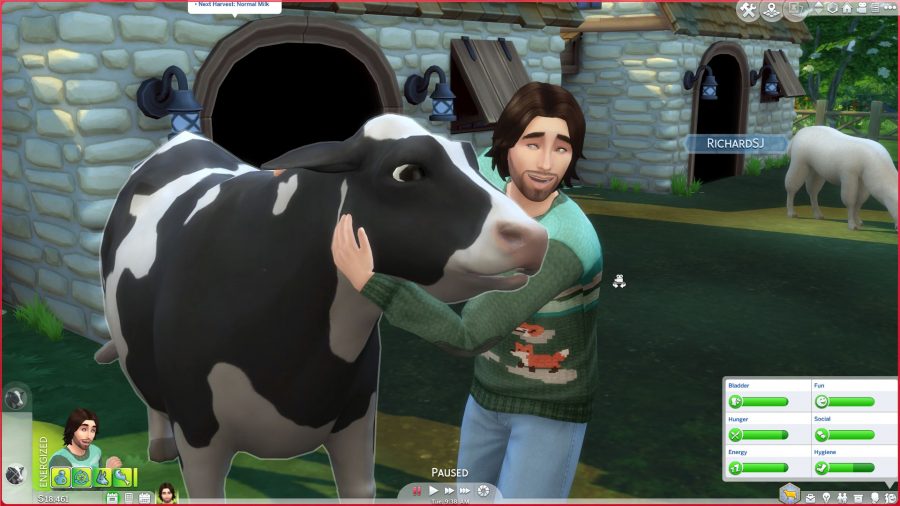 A good Sims expansion should, to my mind, deliver the core experience it promises while also enriching the wider game. Cottage Living’s promise is a life of harmony with nature in a quaint country village, with bickering local eccentrics providing a little gentle drama.

Such a life is clearly inspired by the English rural idyll. Henford-on-Bagley is a village of honey-coloured cottages and red telephone boxes in which the hangout is a pub, not a bar. It’s the spitting image of the almost sickeningly pretty town of Bradford on Avon, which is barely 30 minutes’ drive from the PCGamesN offices, so it’s a personal treat to play something so close to home. Obviously all the elements of this aesthetic, from thatched roofs to tweed jackets for your Sims, are ready to use in your own creations.

I roll a new Sim (Rich Samson, my hippie alter ego) and give him the new aspiration, Country Caretaker, which is basically a quest walking you through the whole expansion. Henford has two starter homes, one of which – in a lovely secluded spot near a waterfall – is full of animals both wild and domesticated, and the perfect place to begin. The purchase does empty Rich’s account, until another new Sim named Tommy Largesse moves in and immediately leaves, forgetting to take his $20,000 starting cash with him. Replenished, I do a little light remodelling to accommodate both a cow and a llama, and embark on my garden-to-table life.

I remember feeling blessed when my partner’s cat Spike – who, I was assured, doesn’t usually get along with men – sidled up to my ankles for the first time and purred. There’s something very moving in the innocence and the unguardedness with which an animal can seem to give its affection. The Sims is sometimes billed as a life simulator, when really it’s a daydream simulator: animal lovers might sometimes wish their pets were more expressive of what we’d all like to assume is their genuine fondness for us. Cottage Living delivers that wish.

Rabbits sit up on their hind legs, noses twitching and big bright eyes shining, as they gift you rare seeds. Foxes chirrup and nod reasonably when asked not to harass your chickens, who cluck and bounce when asked if they’re “planning a coop”. Cows and llamas nuzzle against their carer, smiling in a way that’s just the right side of wholesome vs unnerving. The animators on this DLC have done an outstanding job across the board, and animal lovers will regularly melt into puddles of warm, sticky goo at their desks.

This benign depiction of our relationship with so-called ‘livestock’ is wholly in keeping with the idealised version of modern life that is The Sims’ stock in trade, and that extends to their monetisation. If you want to live off the land, there’s no new farming career – you just do the work, watering and weeding your crops, feeding your animals, and cleaning their sheds. You’ll harvest and sell cows’ milk, llama wool, and chicken eggs, and can raise their quality by feeding your animals special treats. The rarest of these will take some work to discover or unlock, but that’s the way to eventually make decent money.

The less benign side of farming is a reality that Cottage Living neatly sidesteps. You can sell your animals for money, but you can also ‘trade’ them for meat, at which point they will simply turn and walk into their sheds, never to re-emerge. Later that day they’ll be delivered neatly to your door in a bag, leaving you to imagine the whirring, dripping blades that I presume are installed in the ceiling of said sheds.

You can ‘trade’ animals for meat to have them neatly delivered to you in a bag, leaving you to imagine how they get there

Again, no one expects The Sims of all games to actually depict butchery, but it still raises a wry smile as a metaphor for the ways we sanitise this process for ourselves in real life. It doesn’t take much imagination to read Cottage Living as an unintended satire at such moments.

You can raise flora as well as fauna, with two new types of crop for you to tend. Oversized crops, like pumpkins and watermelons, take a week to grow and can then be sold, with better fertilisers and higher gardening skill leading to more valuable produce. Fruit trees, and small crops like spinach and mushrooms, grow perpetually – each plant ‘evolving’ in quality as you care for it. You’ll harvest them at regular intervals and earn more money as they improve, with plots of high-quality plants yielding a nice trickle of regular income. It’s all very Stardew Valley. 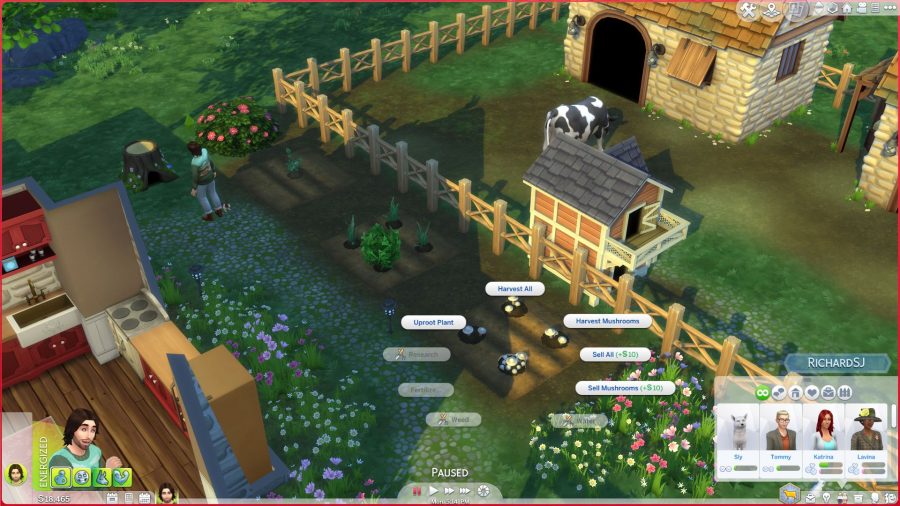 Put all this together and tending a decent-sized farm easily fills a working day, to the point where it gets a bit tedious after the charm of those first few animal interactions wears thin. But you don’t have to commit fully to the farming life. You can simply add a llama shed to your garden in Willow Creek, or a greenhouse with a few vegetable patches, and give a green-thumbed spouse a side gig while their partner is working a nine-to-five. In this way, Cottage Living seamlessly enriches the rest of the game far better than, say, Snowy Escape, and benefits in turn from its own synergies. The compatibility with Eco Lifestyle is obvious, and naturally Henford supports that expansion’s environment system.

Those who do want to become wholly self-sustaining have a bunch of cool new incentives. Cottage Living adds Lot Challenges (as opposed to Lot Traits), which give various difficulties to overcome. Committed life simmers will be glad to learn that the Simple Living challenge does away with the so-called ‘magic fridge’, requiring you instead to stock it with the required ingredients before you can cook a meal. You can have these delivered via a grocery service, or grow them yourself, and top-notch meal quality (even if your cooking skill sucks) is your reward. 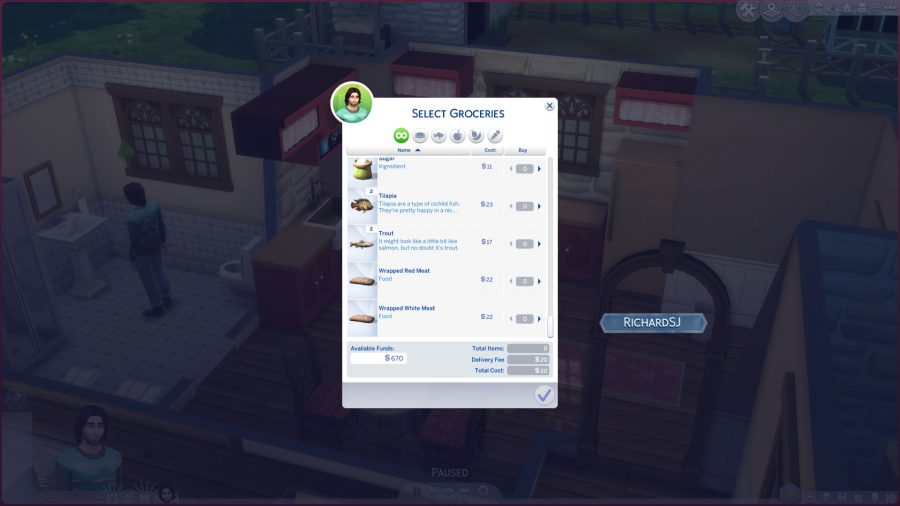 The Animal Enthusiast trait gives new interactions with animals and an energised moodlet for exploring them, which makes caring for them a bit easier. Cottage Living’s other new trait is Lactose Intolerant, and while it’s nice to have this particular dietary restriction represented, the trait’s effects do not reach widely and are ultimately restrictive, so it isn’t especially tempting compared with those that do more to define a Sim’s personality. I am thus baffled, once again, by the decision to drop from five traits per Sim to three in The Sims 4.

The only element of Cottage Living that’s left me a little cold is running errands for the locals. Being asked to speak to gnomes or nose into the romantic lives of strangers is a lovely depiction of the eccentricities and dramas of a small village, and already weaves a richer tapestry than exists in any of the game’s other communities, but beyond this there’s little reason to get involved. Rewards for these errands include a trickle of simoleons and a mix of different resources (eg animal feed, crop seeds, etc). Perhaps these are a path to certain high-end supplies, but without any kind of insight into that and pretty lacklustre rewards at the early stages, it feels like a bit of a waste of time. You may get more mileage if you’re looking for The Sims to do more storytelling, however. 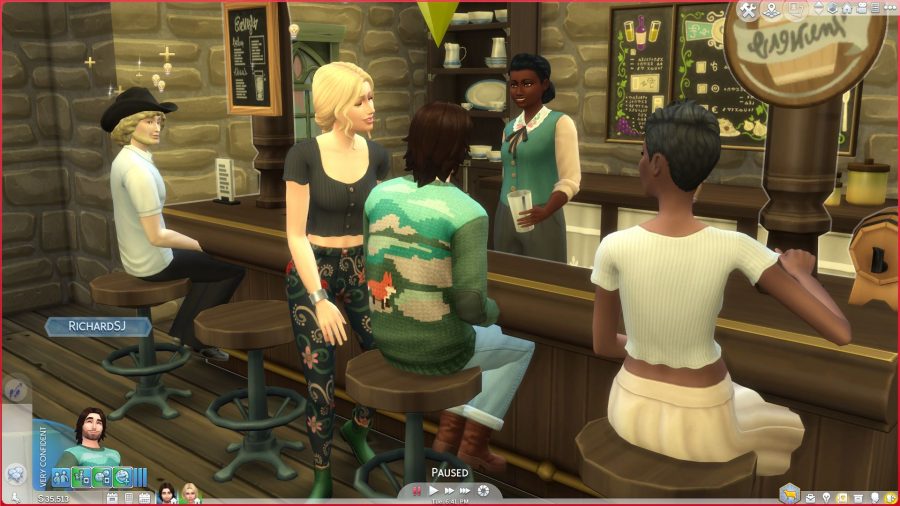 Cottage Living is definitely one of the better Sims 4 expansions. The new plants and animals are brilliantly realised both aesthetically and as systems to enrich the game, which you can commit to wholeheartedly as part of rural life in the charming town of Henford, or piecemeal alongside existing households in other communities. If you love the English country look, fancy role-playing a farmer, or just want a friendly llama in your back garden, you won’t be disappointed.

Missing the base game? You can buy The Sims 4 on Fanatical here.