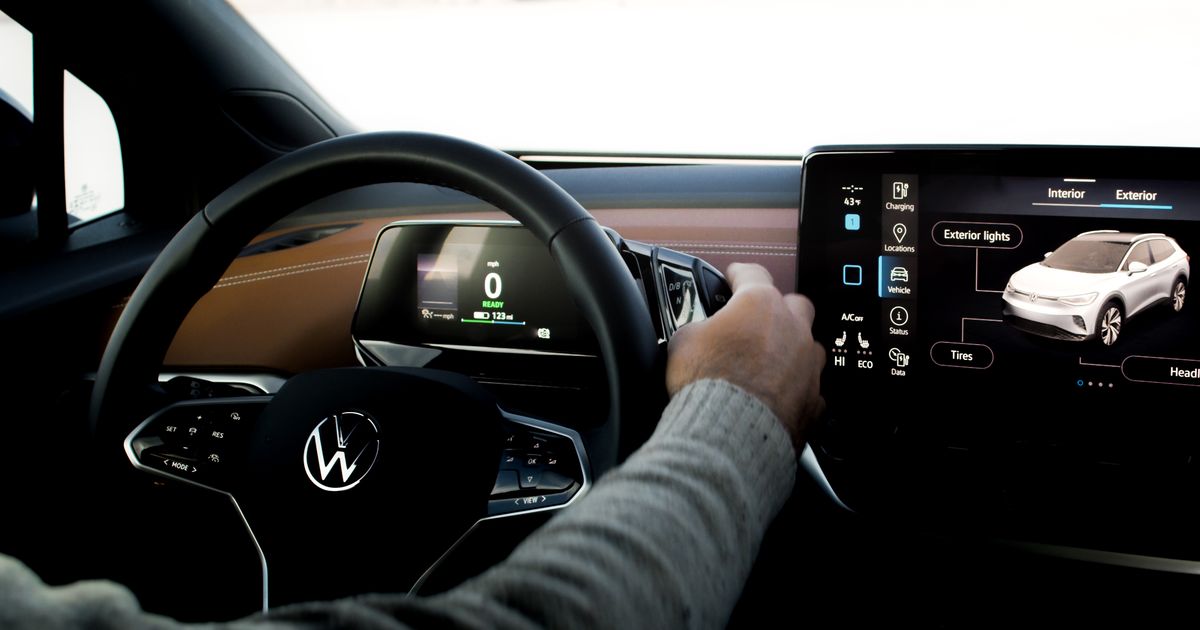 While driving around in Volkswagen’s newest electric vehicle, the ID.4 compact SUV, for the past few days, I was bombarded with information overload from two different screens behind the steering wheel and one on the center dash. But there was an unexpected alarm system that proved less overwhelming and even comforting: a silent, pulsing streak of light.

The EV, which arrives next month, will expose drivers to a variety of sensory distractions, including notifications of range, speed and vibrating alerts when the car turns into the curb, a wireless charging notification for smartphones playing music, or a podcast -Tracks and your current driving route, among other things.

During my test run, I had turned off the annoying turn-by-turn notifications while using Volkswagen’s proprietary maps app. But even with the map muted, when I used the Volkswagen navigation system on the 12-inch touch infotainment display, I noticed that a subtle line of bright white light illuminated the lower band of the windshield.

This is the ID.Light, an interactive light strip that is designed to help drivers with simple visual cues to indicate turns or to warn you if you are getting too close to the car in front. At first it seemed to be another trait that vied for my attention. I didn’t think it would be useful. But it actually helped me focus on and tune out the onslaught of digital distractions.

The ID.Light system is included in all versions of the fully electric ID.4, which starts at 39,995 US dollars for the basic “Pro” version. I tested the sold out 1st Edition, which will soon be available for $ 43,995 and is designed for a range of 250 miles on an 82 kWh lithium-ion battery.

With so many other things going on in the car to distract my eyes – like the customizable ambient lighting along the dashboard and door panels and the personalized grid layout on the touchscreen surface – I wasn’t really expecting to focus on the streak of light.

But the light bar interacts with you gently and unobtrusively. Instead of another alarm or ping, it’s a quiet, gentle pulse powered by 54 LED lights that illuminate for various functions while you are driving.

When using the voice assistance system, this bar of light will vibrate to indicate that he is listening. When I plugged the car into a public station to charge it, the windshield would light up to show it was charging and to show the battery level. When someone called, the light bar pulsed parallel to the ringing of the doorbell.

However, it is during navigation that the ID.Light becomes most useful. Shortly before the turn, the light would slide either to the left or right over the windshield, depending on the destination. It acted as a supplementary warning to the instructions already displayed on both screens.

At some point during a trip, I accidentally left map mode when I came to a stop sign. Instead of fiddling with the display to get back to the next direction on the map, I knew I had to turn left because the light bar was pulsing to the left. It’s a subtle guide, but after using the car for a few hours, I really came to appreciate it.

The reassuring ID.Light system from Volkswagen is a welcome change from the audible pings and numerous notifications about range, regenerative braking and lane keeping that affect the driving experience of the electric vehicle. It’s a touch of zen for an otherwise overwhelming ride.