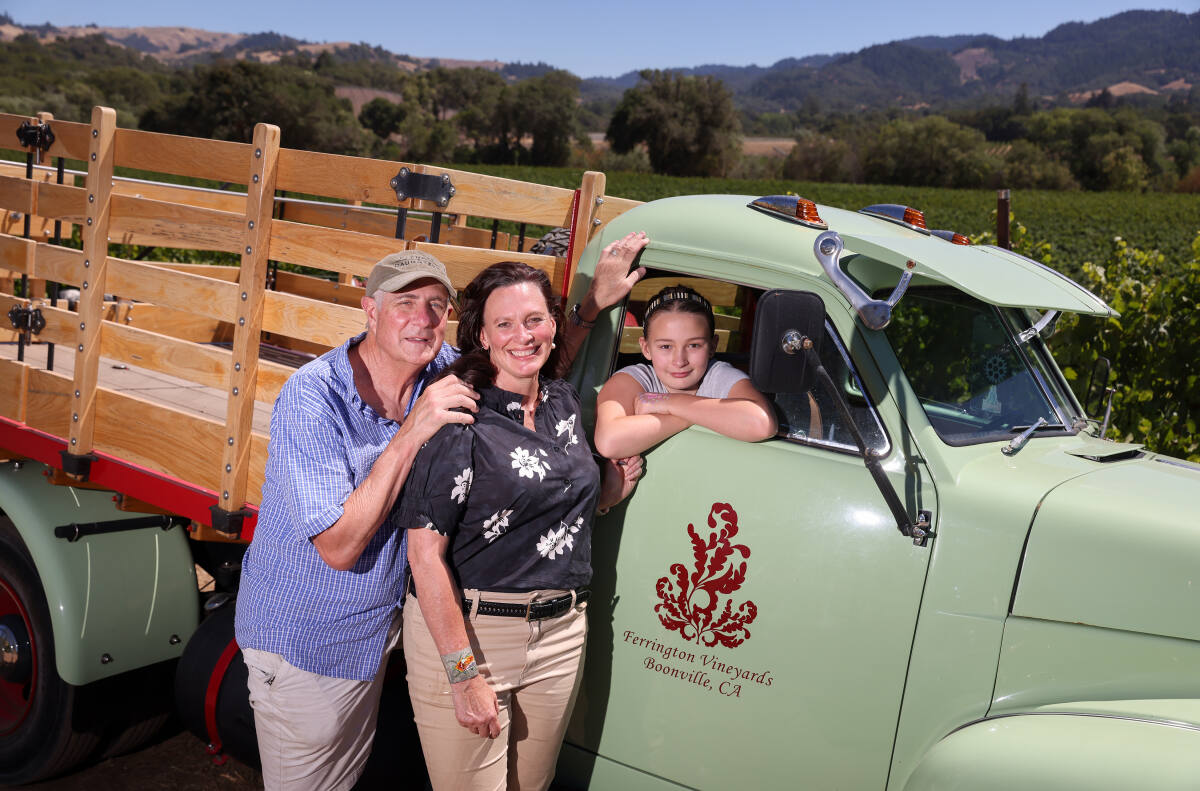 All commercial wineries must be bonded to sell wine and pay taxes in the state of California, but a family-owned winery in the Anderson Valley is operating with the power of an additional bond: A paternal one.

The winery, Fathers + Daughters Cellars, is based in Boonville and represents three generations of the same family — two fathers and three daughters.

Guy Pacurar is one of the fathers and is essentially running the show. He started the label as a side gig back in 2012 as a passion project to supplement his day job as owner of the 11-room Brewery Gulch Inn in Mendocino. When Pacurar sold the inn earlier this year, he vowed to devote all his energy and attention to the wine.

This means Fathers + Daughters is about to grow up. Fast.

“At the inn we tried to go out of our way to make every guest’s stay first-class, to do our best to take their breath away,” he said. “We have the same approach with the wine: High touch. Low impact. We’re excited about where that will take us from here.”

Birth of a label

It’s difficult to tell the story of Fathers + Daughters without a primer on the family tree.

Pacurar, 63, has two daughters: Taylor Lyons, 34, and Ella Pacurar, 10. His wife, Sarah Schoeneman, is 52 and is the daughter of 81-year-old Kurt Schoeneman, who owns the Ferrington Vineyard in Booneville.

Ferrington sits in the middle of the Anderson Valley and is renowned for premium pinot noir. The senior Schoeneman has been selling grapes to well-respected wineries like Williams-Selyem and Arista Winery in Healdsburg for decades. In Sonoma County, some other wineries Ferrington Vineyard sells to include Kosta Browne in Sebastopol, J. Davis in Calistoga and V. Sattui in St. Helena.

When Ella Pacurar arrived, and her parents decided it was time to leverage some of the grapes to make a wine that would commemorate her birth.

“We had always thrown around the idea of having our own wine because of the grapes my dad grows,” said Sarah Schoeneman. “We didn’t want a Ferrington label because we didn’t want to compete with the wineries who bought our grapes. So we went with a name that described what we were instead.”

Once they had the name squared away, the Pacurars and Schoenemans set their sights on a consulting winemaker. They wanted someone with a reputation for making pinot that ages well.

And that winemamaker is Phil Baxter, who specialized in that very approach. An added bonus, Baxter lives in Philo, which is a town over from the Anderson Valley. In Philo, Baxter also has a tasting room for his own wine label, Baxter Wines.

Baxter is also a father of two and jumped at the chance to work with Ferrington fruit. Then a partnership was born.

“They are true to my philosophy of letting the vineyard show through,” Baxter said. “The free-reign he gives me over winemaking decisions means that they share my hallmark style of clean, vibrant fruit along with complex yet delicate flavors.”

The first vintage was 60 cases of a pinot named Ella’s Reserve. The 2018 Ella’s Reserve Pinot Noir bottle labels have an image of a father holding hands with a young daughter on the front. Guy Pacurar and the Sarah Schoeneman poured it at the inn and sold it to friends. People loved it and they wanted more. So the couple made plans to grow the brand as their daughter grew.

Over the next decade Fathers + Daughters used Ferrington fruit to produce its flagship pinot noir, as well as other varieties like sauvignon blanc, chardonnay and a gewurztraminer.

Baxter also has tried his hand a pétillant-naturel, a type of wine with a natural effervescence resulting from fermentation. They made it in to the 2018 Sarah’s Rustic Bubbles because she loves sparkling wine.

Fathers + Daughters even bought zinfandel grapes from a vineyard in Ukiah for Baxter to make a rosé.

Going into last year’s vintage, production was small. Fathers + Daughters made 500 cases in 2021 and will bottle about 750 cases this year. Kurt Schoeneman, who has owned and farmed Ferrington vineyard for 27 years, said he is delighted to see some of the grapes going into a family brand, and noted he is honored to be part of the process.

“This is really Guy and Sarah’s thing, and I’m proud of them,” he said. “Other wine labels have been working with Ferrington grapes for years. It’s nice to have a wine of our own.”

Everyone in the family is involved with the wine in some way: Kurt Schoeneman in growing the grapes, everyone else in selling and marketing it. Guy Pacurar and Sarah Schoeneman conduct tastings by appointment on a hill at the back of Ferrington Vineyard. It is one of the most breathtakingly beautiful spots in the entire Anderson Valley.