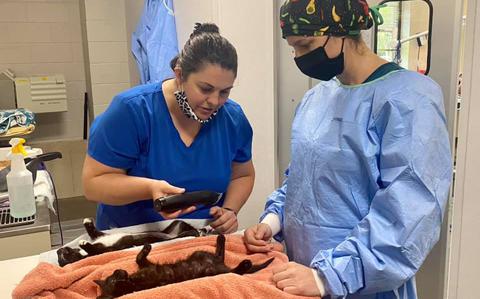 (Tribune News Service) Residents looking to adopt a pet may find their new addition can join the family sooner thanks to a partnership between Cumberland County and Fort Bragg.

Soldiers in the First Year Graduate Veterinary Education program are helping spays and neuters dogs and cats at the shelter through a partnership program that began about six months ago.

Previously, Dr. April Kelly, a veterinarian for the Cumberland County Animal Shelter, averaged about five to six surgeries a day by herself.

Now, around 20 procedures are completed on the days the soldiers come in to help, Kelly said.

That means animals are able to be adopted sooner and space is freed up for new animals coming in, Kelly said. She said that on any given day between 75 to 100 animals are up for adoption.

“The ideal situation is spay and neuter them before they get adopted,” Kelly said. “That way, there’s no lag time, because it sucks for someone to come and say, ‘This is my animal,’ and then we say, ‘Oh wait, you can’t take it home because it’s not fixed.’ ”

Recovery time from the procedures takes from 10 to 14 days, she said.

Fort Bragg’s First Year Graduate Veterinary Education program has been around since about 2011, and Fort Bragg is one of seven sites in the Army for the program, said Lt. Col. Jake Barnoski, a clinical instructor for the program.

It falls under the Fort Bragg Public Health Activity.

Barnoski described it as similar to a graduate-level internship with most soldiers arriving straight from veterinary school.

Prior to this year, soldiers in the program would work on post helping treat pets brought in to the post veterinary clinic by service members and military dependents, or occasionally check on the military working dogs.

At the beginning of the year, Barnoski received an email from Kelly asking if the soldiers wanted to help. Barnoski thought the program would be good experience for the soldiers.

“The shelter here has been a huge blessing for us, because surgery is like any other skill, and you just get better with repetition, and so we can get a lot of repetition here in a day and also be helping them at the same time,” he said.

With five soldiers currently in the program that will last about a year, will each complete about four to five surgeries each day they’re at the Cumberland County Animal Shelter, Barnoski said.

They’re required to have about 25 completed during the year-long program.

“When they leave here and they go to their next job, they’re going to be expected to run the clinic,” Barnoski said.

Capt. Miriam Firth, who was in ROTC during undergrad school, commissioned in 2016 and was granted an education delay by the Army Reserves to attend veterinarian school.

“I’ve always wanted to be a veterinarian since I was 7,” Firth said as she worked to spay a dog at the Cumberland County Animal Shelter on Wednesday. “I think that was the first year I dressed up at Halloween as a veterinarian.”

Also part of the program is Capt. Claire Squires.

With a master’s degree in natural resources ecology, Squires said she worked at a veterinarian office at night when going through a forest fire management program

“At some point, I thought that maybe I should make that my full-time gig instead of my side gig,” Squires said.

With a commitment to the Army after receiving a scholarship for vet school, she commissioned in 2017 and arrived at Fort Bragg in December.

“Like here, we have Special Forces and a big population of civil affairs, so that’s pretty unique for us to be at Fort Bragg and be able to interact with those veterinarians and figure out what they do and work with them and their dogs,” Squires said while working to spay a cat Wednesday at the Cumberland County Animal Shelter. “I think this shelter medicine program here — I don’t know if any of the other sites are doing this.”

Helping Firth and Squires during procedures on Wednesday were veterinary technicians Rebecca Hamer and Carly Roche, who are Department of Army civilians.

Hamer said their role is to help prep for the procedures and monitor the animals’ heart rates during procedures.

Roche has been a technician for the program since its inception. She said that while she’s tried her hand at other fields, she’s always loved working with animals.

“I like to go to work every day because it’s something I love and doesn’t feel like work,” she said.

Roche, an Army reservist, was working for a contract working dog company in 2011 when she was asked if she’d be interested in the Army program.

“I feel like we’ve grown so much and we’ve done a better job at preparing the soldiers for other duty sites just by adding some things,” Roche said. “Like this year for sure, I think this is awesome for them to have surgery rotations at the shelter.”

By the end of July, Firth and Squires will complete the program and are headed to Florida and Colorado for their next assignments.

Then a new set of interns will arrive to help at the shelter.

Barnoski said other Fort Bragg units such as the 248th Medical Detachment Veterinary Service Support and civil affairs units are also sending their officers and technicians to the shelter for training.

In a news release from the county that announced the partnership, Animal Services Director Elaine Smith said the help is appreciated.

“They greatly expand our capacity to provide quality care for these animals,” Smith said. “They also help us get animals ready for adoption much more quickly, so they don’t have to spend extra days here at the shelter. It’s also great to see the extra experience these veterinarians get so they can keep their surgical skills at the highest level.”