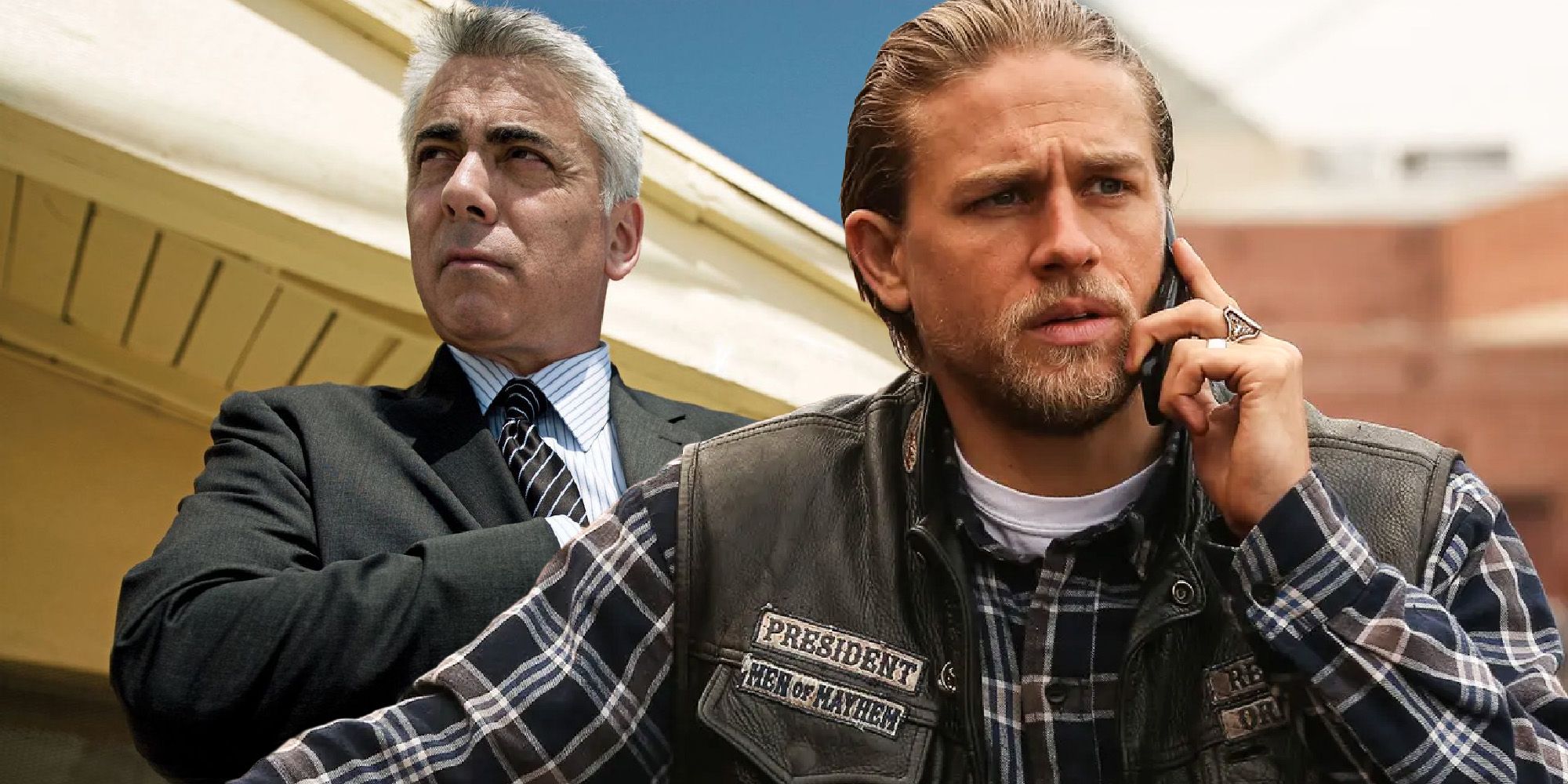 Sons Of Anarchy is one of the best TV dramas in recent history, with its character arcs and taut plots gripping fans from start to finish. Packed with plenty of storylines, it comes as no surprise that some tend to be forgotten along the way. Though things turn out just fine in general, there are stories that fans wish would have been explored, explained, or resolved a bit more.

Sons Of Anarchy can be lauded for wrapping up most of its stories perfectly. Like Hamlet, Jax was always destined to have a tragic end. Gemma was always going to pay for her treachery, and Jax’s romance with Tara was always doomed to fail. However, there were a number of storylines that got a significant amount of buildup without any resolution too.

One of the evilest villains in the series vanished without explanation. Ethan Zobelle was the boss of the white supremacist group, the League of American Nationalists (LOAN). He not only managed to convince other influential businessmen to join the organization but also brought numerous gangs in Charming under his wing.

The endgame he had in mind? To intimidate SAMCRO into cutting their ties with black gangs. Zobelle was eventually cornered by the Sons at a store, but just before they could kill him, Jax got the call that Abel had been kidnapped hence they had to leave. After Zobelle’s lucky escape, nothing else was heard of him.

At the start of the series, it was revealed that Charming Police Chief Wayne Unser had been diagnosed with cancer. Because of this unfortunate development, he was planning on handing over power to Deputy David Hale. Fearing that Hale wouldn’t be as friendly as Unser, Clay forced the ailing chief to stay on the job for a few more months.

Interestingly, as the series progressed, Unser’s cancer seemed to barely be an issue. He behaved almost completely normally and survived until the end of the series despite having a supposedly deadly prognosis.

8 Bobby’s Career As An Elvis Impersonator

In the first season, it was revealed that Bobby was a huge Rock n’ Roll fan. He even had a side gig that involved him performing in clubs by impersonating Elvis Presley.

RELATED: Sons Of Anarchy: Law Enforcement Officers Ranked From Heroic To Most Villainous

In future seasons, Bobby appeared to have dropped his side gig to focus more on crime. The reason for this was never given. It was also a surprising move because he clearly needed the money. During a confrontation with his ex-wife, it emerged that he was often late on his child support payments.

No none was more eager to take down the Sons than AUSA Lincoln Potter. He recruited a group of skilled law enforcement officers, including Lieutenant Eli Roosevelt, and even blackmailed Juice so that he could get him to become an informant.

Unfortunately for him, Galindo cartel enforcer Romero (Danny Trejo) asked him to stop pursuing the Sons, revealing that he was actually a CIA agent and the agency wanted the IRA to continue supplying guns SAMCRO. After Galen’s death, the CIA’s plan was basically dead. Romero disappeared but interestingly, Potter never resumed his investigation.

Like Clay and Piney, SAMCRO’s most popular Prospect, Half-Sack Epps, served in the military. As an army man, he made a reputation for himself as a skilled boxer. He even won the Junior Lightweight Championship in the Army-Navy boxing tournament. SAMCRO took advantage of Half-Sack’s skills by enrolling him in a bare-knuckle boxing competition to raise money for guns.

He was supposed to intentionally lose in the final as part of the club’s match-fixing and betting scheme, but he knocked out his opponent in anger. He had made a mistake but he was still useful. Surprisingly, his skills were never used by the club again to make more money. His boxing skills were never mentioned again.

Jax and several other SAMCRO members found themselves in Belfast in Season 3. They had gone to rescue Abel and despite the fact that they had serious business to attend to, Jax’s playboy spirit didn’t consider taking a rest.

RELATED: Sons Of Anarchy: 10 Hamlet Characters & Their Counterparts In The Show

He almost slept with Maureen Ashby’s daughter Trinity, only to be told that she was his half-sister. Apparently, Maureen had been with John Teller in the ’80s and early ’90s. When SAMBEL President and Trinity’s step-father Keith McGee was killed for being a traitor, Trinity kinda disappeared too. Jax never wanted to see his sister again, even though he had no other living sibling, ergo having a sister should have meant a lot to him.

Before joining the mother charter, Chibs was a SAMBEL Prospect. After a disagreement, he was booted out of Belfast by Jimmy O. The villain took his wife and daughter, leaving him with nothing. Luckily, he managed to do well for himself in Charming.

The Sons finally captured Jimmy O after he was betrayed by the Russians, and Chibs was given the honor of killing him. He did that gladly. This should have given him the chance to reunite with his family. Fiona still loved him. She proved this when she took care of him after the car bomb incident. There was an opening for a reunion after Jimmy O’s death but that didn’t happen.

Gemma’s evil ways made her unlikable, but she can be given credit for being passionate about family. She cared deeply about Jax and Abel. She also made a point to care for her elderly father when she discovered he was suffering from Alzheimer’s.

Even though he could barely recognize her, she was still there for him.  He was eventually moved to a retirement home since he had no one to take care of him full time. After that, his story ended without explanation.

SAMCRO should have been in big trouble when one of the illegal guns they were selling found its way to the hands of a troubled kid named Matthew. In a shocking moment, Matthew grabbed the automatic weapons and shot fellow students at the Catholic school he attended. Four diedm while nine were injured.

School shootings normally make national (even global) headlines. The incident must have brought unwanted media and law enforcement attention to SAMCRO. Strangely enough, the impact of the shooting was never really explored. It was simply brushed off as another minor subplot in the gun trade with the IRA.

1 The Status Of Opie’s Children

Opie loved his family, specifically his children. They were the reason why he rejoined SAMCRO after getting out of prison. He wasn’t making enough money, so in order to take good care of them, he went back into crime. His wife Donna didn’t like it but he did what he felt like he had to.

After Donna’s death, Opie sought the help of his mother in taking care of the kids, and when she proved unreliable, he married Lyla. After Opie’s death, Lyla had numerous challenges, but the state of Opie’s children wasn’t revealed for the rest of the series.

NEXT: Mayans MC: Every Sons Of Anarchy Character Who Has Appeared On The Spin-Off So Far


Next
All Seasons Of (New) Doctor Who, Ranked By IMDb Average

Philip Etemesi is an author, journalist, screenwriter and film critic based in Nairobi. Kenya. As a child, he preferred watching movies like The Goodfellas instead of Home Alone. His girlfriend constantly has to pull him from the front of the TV but he just keeps returning. Stubborn dude! An animal lover, Philip also has a pet giraffe called Refu.