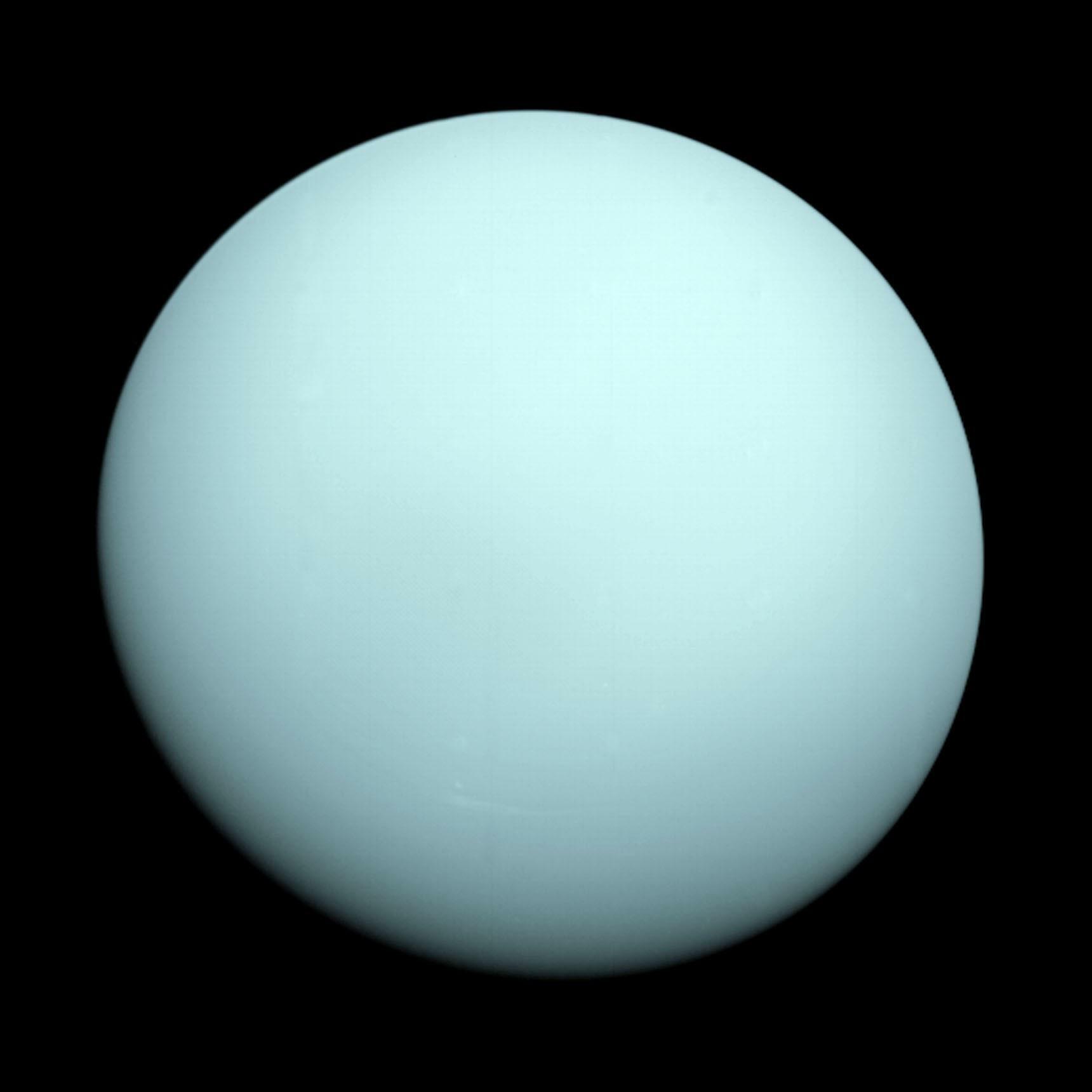 The planets of our solar system, stretching from Mercury out to Neptune, are all incredible.

In a dense cloud of gas and dust billions of years ago, these eight planets emerged along with the sun. They are eight unique expressions of our chaotic universe born upon an arm of the spiraling Milky Way galaxy.

The planets’ sizes and orbits distinguish them from asteroids, comets, and meteoroids, as well as icy objects beyond Neptune in the Kuiper Belt, like the dwarf planet Pluto. Each one is iconic in its own way, but as is the way of the universe, only one can be the best.

Judged by their superlative characteristics, their moons, and their general vibe, here is a definitive ranking of the planets. If you’re at all upset about Pluto not being on this list, I suggest you grow up and move on.

Uranus is kind of like the Luigi to Neptune’s Mario. While they’re both ice giants, Uranus is the second farthest from the sun and a bit smaller by diameter. With winds whipping around at more than 500 miles per hour and temperatures dipping below minus 350 degrees Fahrenheit, Uranus is a pretty hostile planet, but not quite as intense as Neptune.

That said, Uranus has one unique feature: Its rotation. Uranus’s equator is tilted 97.8 degrees, meaning compared to all the other planets, it rotates completely on its side. Summers and winters at each pole last 21 years a piece, which sounds downright awful. 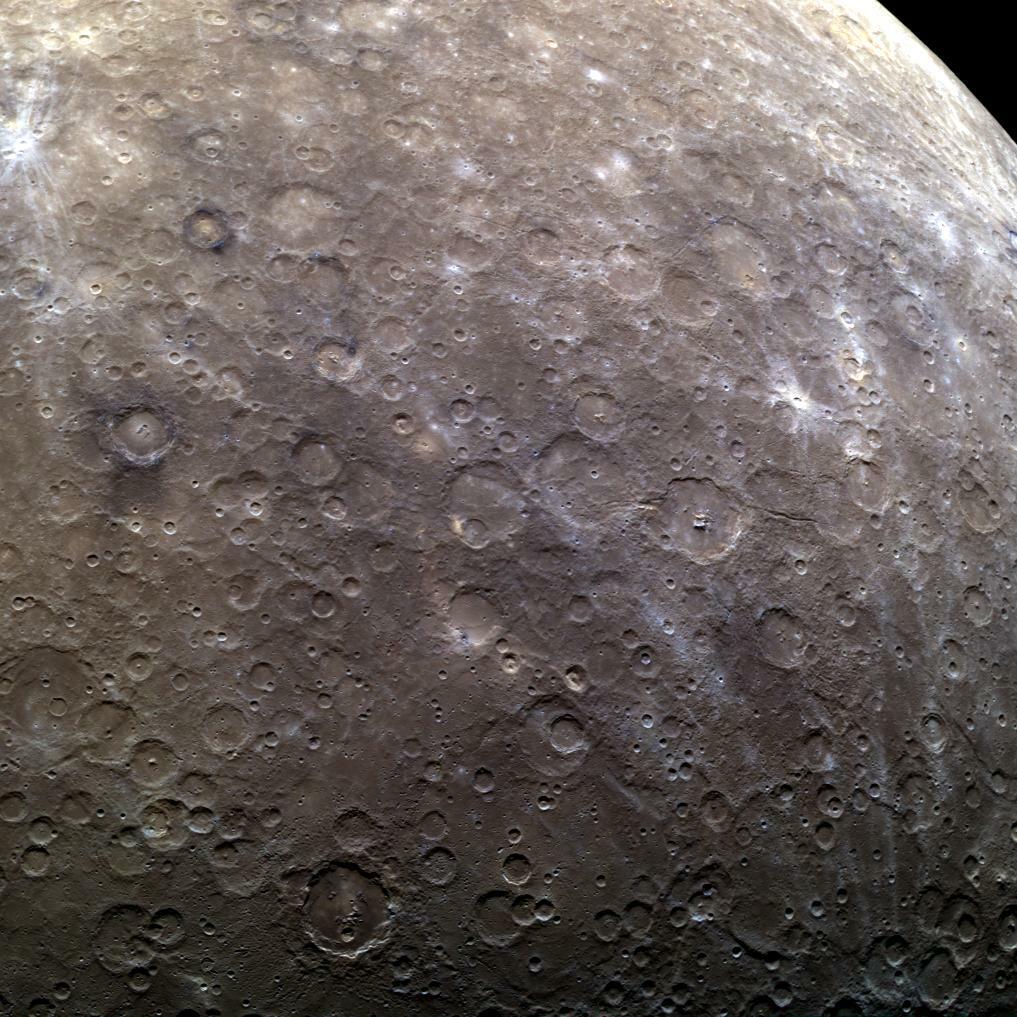 With no moons and barely any atmosphere, Mercury is unencumbered and it shows. Mercury is a tiny whip of a planet that circles the sun every 88 Earth days, traveling at a speed of 29 miles per second. It’s the fastest orbiting planet in our solar system and also the smallest. Its rocky, pock-marked surface makes it look more like a moon than its fellow planets, and it’s the only planet that is actually smaller than two moons: Jupiter’s Ganymede and Saturn’s Titan. A little embarrassing, honestly.

One particularly intriguing aspect of this little speeder is its eccentric orbit, which sees the planet’s distance from the sun range from 29 million miles to 43 million miles. This detailed image of Mars is stitched together from 102 snapshots taken by NASA’s Viking Orbiter.
Credit: nasa/jpl-caltech

When it comes to the search for life, the dusty red planet Mars is one of the solar system’s most intriguing. With atmospheric conditions most similar to Earth’s and images of the surface reminiscent of our most arid environments, it’s relatively easy to imagine what it’s like to stand on the surface. But as far as we know, Mars doesn’t harbor life. Maybe it did at some point in the past, but that’s never been verified.

Mars does have two exciting features: The largest volcano in the solar system, Olympus Mons, with a peak three time taller than Mt. Everest, and a doomed moon. In 50 million years or so, Mars’ moon Phobos will crash into the surface and wreak some havoc, possibly even producing rings of debris around the planet. Cool. 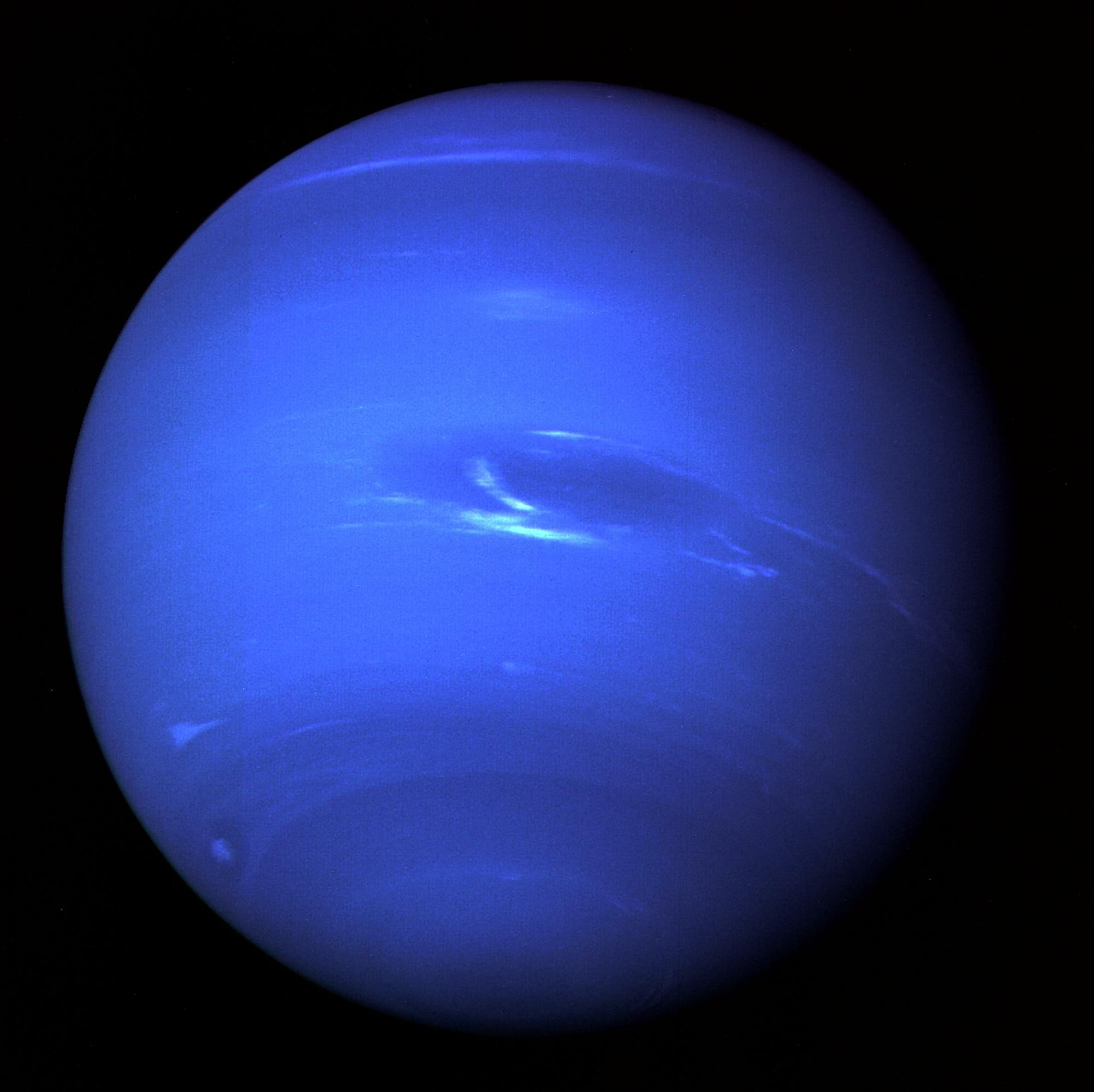 This vivid image of Neptune was beamed back to Earth in 1998 by NASA’s Voyager 2 spacecraft, showcasing the planet’s Great Dark Spot, which has since dissipated.
Credit: nasa/jpl

Neptune is the most distant planet from the sun with a mind-bogglingly slow orbit, taking roughly 165 years to make it all the way around. It’s so far out, its actually sometimes farther away from the sun than the notoriously far-out Pluto. It’s also the windiest planet, with gales hitting 1,200 miles per hour.

While we understand why most planets look the way they do, Neptune’s intoxicating blue hue is actually a bit of a mystery. Who doesn’t love a little mystery? The moon Triton certainly seems to love it — it’s the only known large moon in the solar system that orbits in the opposite direction that the planet spins, suggesting that it was once a foreign object that got trapped in Neptune’s gravitational influence. 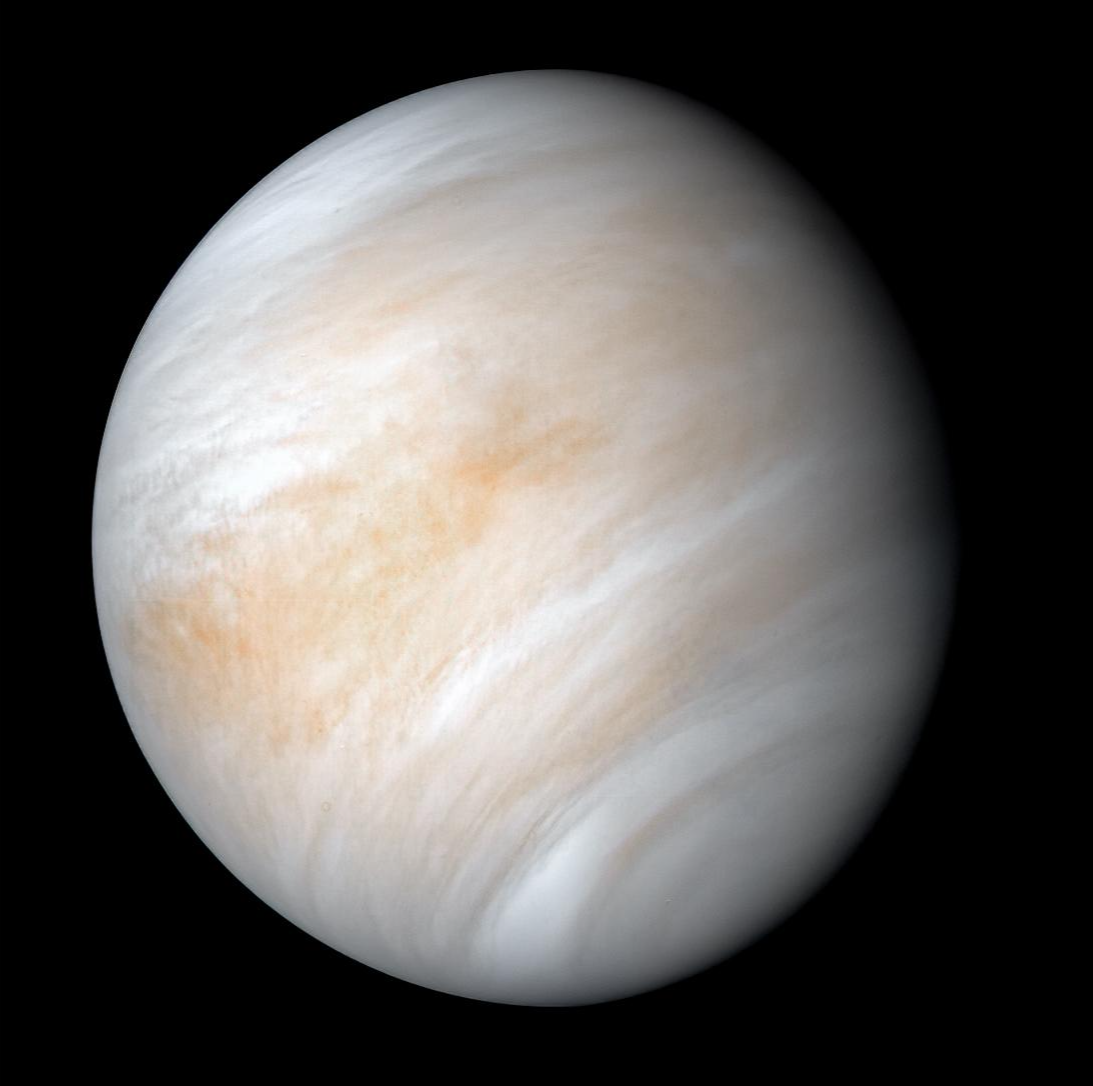 This image of Venus was captured in the ’70s but was re-processed with modern technology in 2020. Beneath those fluffy clouds is a super hot planet with a noxious atmosphere.
Credit: nasa/jpl-caltech

Venus is downright hellish. With peak temperatures reaching up to a sweltering 900 degrees Fahrenheit, it’s the hottest planet. For reference, the melting point of lead is 622 degrees Fahrenheit. Its thick, yellowish atmosphere of carbon dioxide and sulfuric acid traps in heat from the sun, and the clouds literally rain down acid.

With thousands of volcanoes across its surface, Venus is a veritable inferno. It’s not yet confirmed, but it’s possible that some volcanoes are currently active. Yes, it may not be anything close to habitable, but the vibe on Venus is undeniably awesome. Jupiter and one of its large moons, Io, were captured just a day apart from each other by NASA’s New Horizons spacecraft and composed together. The planet’s storms cover its gassy, liquidy surface.
Credit: NASA/JHUAPL

Jupiter takes its role as a gas giant very seriously. This behemoth is the biggest planet in the solar system — you could shove 11 Earths end on end through the middle of Jupiter and still have room leftover. Constantly beset by gigantic storms throughout its short, 10-hour days, Jupiter exudes a kind of chaotic beauty. It screams gas giant.

The icing on the Jupiter cake is its moons. It has 53 confirmed moons, and could have dozens more. Ganymede is the biggest moon in the solar system, Europa likely has a body of liquid water beneath its icy surface, and Io’s volcanoes are the most active in the solar system, even beating out Venus. Between its size, appearance, and diverse moons, it’s a real knockout. If only it had some rings… 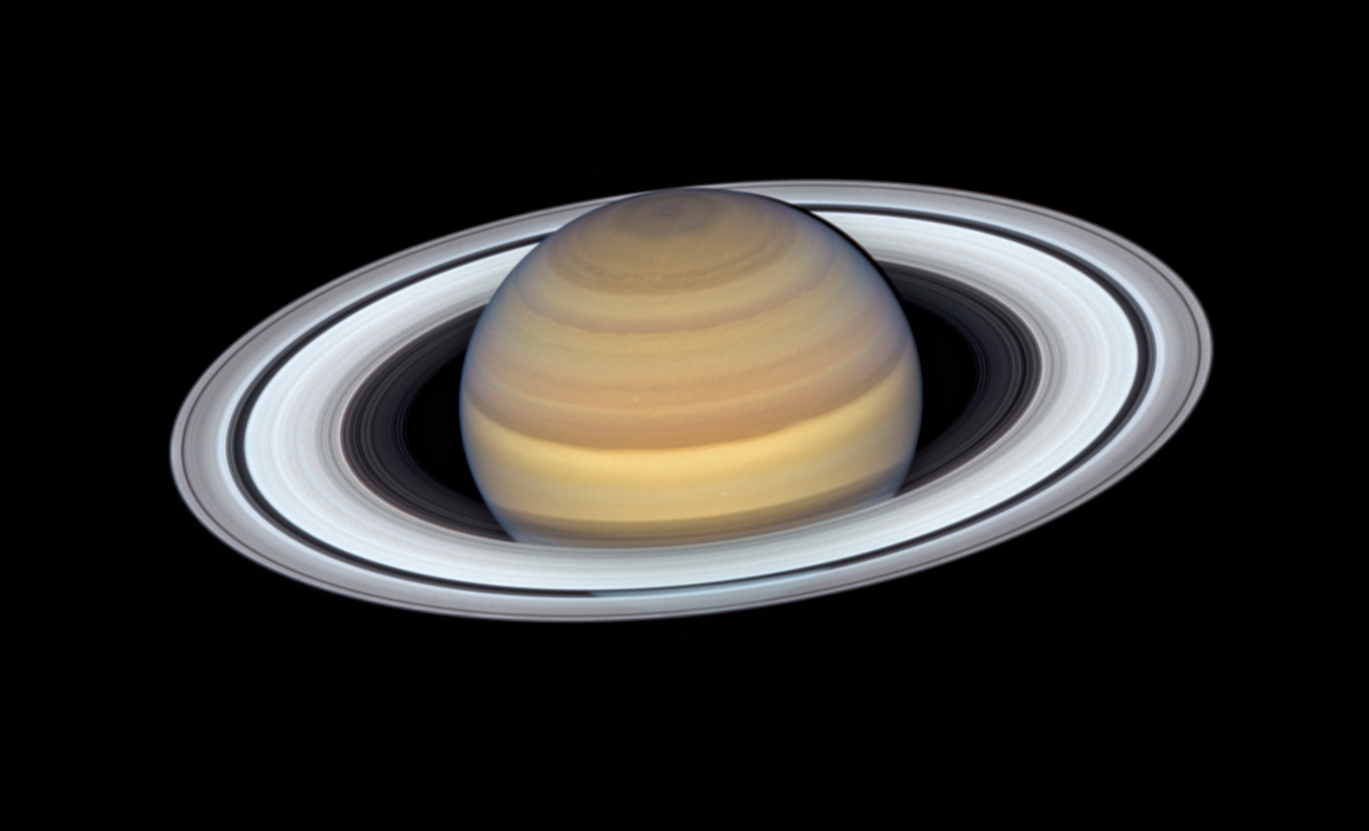 The rings of Saturn were captured brilliantly by the Hubble Space Telescope in 2019, roughly 845 million miles away.
Credit: NASA, ESA, A. Simon (GSFC), M.H. Wong (University of California, Berkeley) and the OPAL Team

Definitely in the running for most iconic planet in our solar system, Saturn’s vivid, icy rings really stand out. Sure, other planets, like Uranus, have rings, but theirs aren’t as visible, complex, or cool as Saturn’s. Its seven distinct rings are likely made up of comets, asteroids, or moons that were torn up by Saturn’s gravity and are now whizzing around the planet in pieces. It’s so cool-looking that it alone has basically become a symbol for space as a whole.

A gas giant like Jupiter, it’s the second biggest planet in the system and, also like Jupiter, it has a lot of moons. There are more than 53 confirmed moons and nearly 30 more that are awaiting confirmation. Two of its larger ones, Titan and Enceladus, are of particular scientific interest. Titan, larger than Mercury, is the only moon we know of with a substantial atmosphere, and it also appears to have liquid rivers and lakes on its solid surface. Enceladus contains an ocean beneath its frozen crust that gets sprayed out into space through geysers. The Earth, captured from space in 2019, in all its life-filled glory.
Credit: NOAA/NASA EPIC Team

I’m sure Earth beating out the competition will make some people groan, but it’s a no-brainer. Earth is the best planet.

Earth developed around the same time and the place as all the other planets, but it’s the only one we know of that managed to produce such a robust expression of life. Plants, animals, fungi, and microorganisms all coexist on this water-logged planet, creating an incredibly complex and sensational global ecosystem. Sure, Earth has been home to some bad things like war criminals and the prison-industrial complex, but it also produced beings with taste buds and apples for them to enjoy.

As far as vibes go in the solar system, it doesn’t get any better than Earth. An abundance of resources has led to the invention of couches, trains, coffee, and the internet. At a macro level, it’s astonishing. At a micro level, it’s mind-blowing.

It may not be the biggest planet or have the most moons, but it’s the best place to live by a long shot and has the most diverse and interesting surface in these galactic parts.