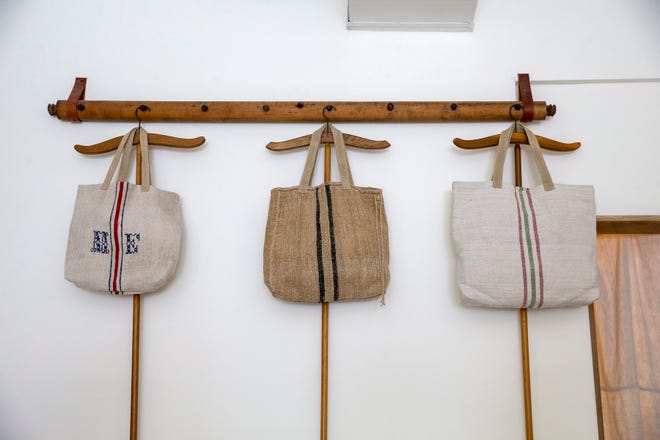 Patriae means native land or homeland in Latin — a word that eventually became the brand of her store in Asbury Park.

Pisch, of West Belmar in Wall, was born in Slovakia. Her family relocated to America when she was seven years old, fleeing Communism. As a teenager, she would travel back to her country to visit family.

It was then that she reconnected with her heritage and started collecting antique textiles and bringing them back to America.

The textiles are homespun and handwoven cloth created from hemp and linen — all organic.

“These antique textiles are unique. They each have their own character through the hands of the woman that wove them. They are all from as early as the mid-to-late 19th century and up to the mid-20th century. They stopped being woven in this type of textile and their way of living died out in Eastern Europe after World War II. They are historic,” Pisch said.

But it wasn’t until she was in her mid-20s  navigating her life in New York City that she would create her first tote bag for herself that would spark it all.

“A friend wanted one, and another friend then a friend of a friend had a store and they wanted to carry them and that’s how it all started,” Pisch said.

And while attending graduate school where she studied the history of decorative art —working in various design galleries — making her antique tote bags grew her side gig.

To help meet the demand, Pisch moved back to New Jersey five years ago. She was seeking a manufacturing spot; her business was growing.

“I wasn’t looking for a store. I was looking for space to house the business. Because at that time I knew I wanted to work for myself and I wanted to do this exclusively. And I already had  the whole esthetic and branding of it all, “Pisch said.

Pisch also love vintage products. She sources vintage clothing and loves to repurpose them into T-shirts and jackets.

Tamara Walker is the Lead News Assistant and Trending Reporter since 2015. She can be reached at twalker@gannettnj.com on Twitter @twilderapp