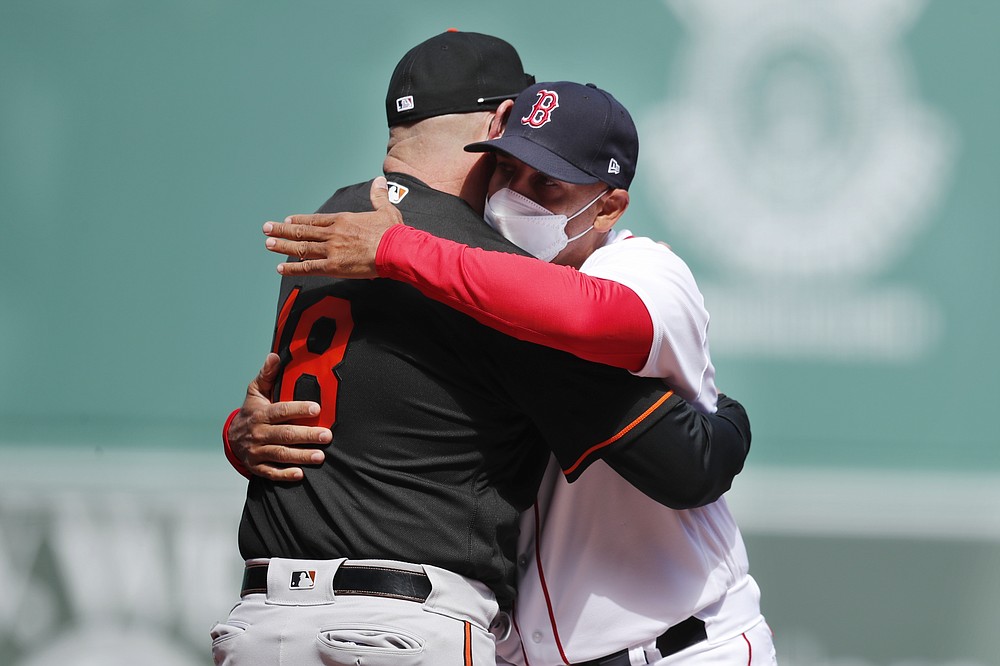 BOSTON — Orioles left-hander John Means was supposed to start the 2020 opener in Boston before a sore arm landed him on the injured list.

When he got his chance this year, he froze the Red Sox in a frigid Fenway Park.

Means pitched seven innings of one-hit ball, allowing a single to lead off the game and retiring the last 18 batters he faced on Friday to lead Baltimore to a 3-0 victory over Boston in their rain-delayed opener.

“It was a really cool experience. Something I’ll have, to tell my kids forever,” Means said. “It was probably one of the best starts of my career.”

Means struck out five and allowed just two baserunners — the other on an error — earning the win when Ryan Mountcastle doubled in two runs in the sixth to break a scoreless tie. Anthony Santander added an RBI single in the eighth.

Means allowed a single to Boston leadoff hitter Kike Hernandez, then picked him off first. The only other Red Sox baserunner for him came when Xander Bogaerts reached on third baseman Maikel Franco’s error to lead off the second; he was stranded there.

“Just a clinic, pitching wise,” Orioles Manager Brandon Hyde said. “Gave up the leadoff single and then cruised from there.”

Tanner Scott pitched one hitless inning and Cesar Valdez got the last three outs for the save in the combined two-hitter. The Red Sox were shut out in an opener for the first time since 1976, when Jim Palmer and the Orioles beat Ferguson Jenkins 1-0 in a matchup of Hall of Famers in Baltimore.

Cedric Mullins and Pedro Severino each had two hits for Baltimore, which finished fourth in the AL East last season, one game ahead of the last-place Red Sox.

“We knew that we were going to lose during the season, we got it out of the way I guess,” Red Sox Manager Alex Cora said.

Cora, who guided Boston to the 2018 World Series championship, returned this season after serving a suspension last year for his role in the Astros cheating scandal. He received a big cheer when the teams were introduced before the game.

Boston put runners on first and second against Scott with two out in the eighth, but Bobby Dalbec struck out looking to end it. J.D. Martinez doubled and took third on a passed ball in the ninth before Valdez retired Bogaerts on a line drive to right.

Nathan Eovaldi scattered four hits and a walk over 5 1/3 innings for Boston. After Severino singled to lead off the sixth, Matt Andriese came in with one out and walked Trey Mancini.

A day after the season’s first game was postponed because of rain and cold, the Red Sox and Orioles tried again in better weather — sunshine and puffy clouds but still a first-pitch temperature of 37 degrees.

The crowd of 4,452 — 12% of capacity, as allowed by the state — huddled under blankets and winter coats and had little for their gloved hands to clap for.

“It was definitely a nice feeling to have people in the seats, energy in the ballpark,” Hyde said. “Home or road, it’s so much different when there’s people here. It was a nice change from last year.”

DODGERS 11, ROCKIES 6 Trevor Bauer took a no-hit bid into the seventh inning in his Los Angeles debut before allowing a pair of two-run home runs, and the Dodgers held on after building a big lead to beat Colorado. The game had a little bit of everything, from seven of the Dodgers’ 16 hits going for extra bases — no homers, though — to a gray cat making a surprise entrance onto the field in the eighth inning. The feline hung out in center with Cody Bellinger for a moment before being picked up and ushered out by stadium personnel. Bauer (1-0) struck out 10.

RAYS 6, MARLINS 4 Joey Wendle hit a three-run home run, highlighting a four-run rally in the ninth inning that sent visiting Tampa Bay over Miami. Wendle’s one-out shot off closer Anthony Bass (0-1) landed in the upper deck in right field and erased a 4-2 deficit. Manuel Margot then tripled and scored on Francisco Mejia’s sacrifice fly. Margot also homered and Austin Meadows went deep for the second consecutive game, helping Tampa Bay win its seventh consecutive game in Miami dating to 2019. The Rays edged the Marlins 1-0 on opening day Thursday on Meadows’ homer. Andrew Kittredge (1-0) gave up a run in the eighth. Diego Castillo got his second save with a scoreless ninth. Miguel Rojas had a go-ahead, two-run single in the seventh that put Miami ahead 3-2.

Acting Mayor of Boston Kim Janey reacts after throwing out the ceremonial first pitch before an opening day baseball game between the Boston Red Sox and the Baltimore Orioles, Friday, April 2, 2021, in Boston. (AP Photo/Michael Dwyer) 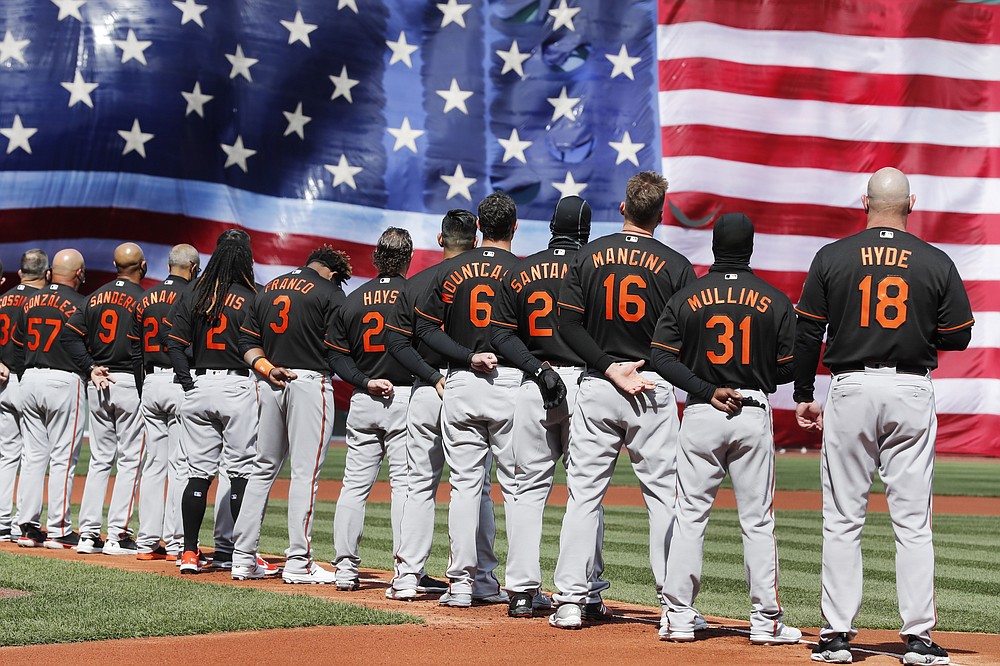 The Baltimore Orioles stand for the national anthem before an opening day baseball game against the Boston Red Sox, Friday, April 2, 2021, in Boston. (AP Photo/Michael Dwyer) 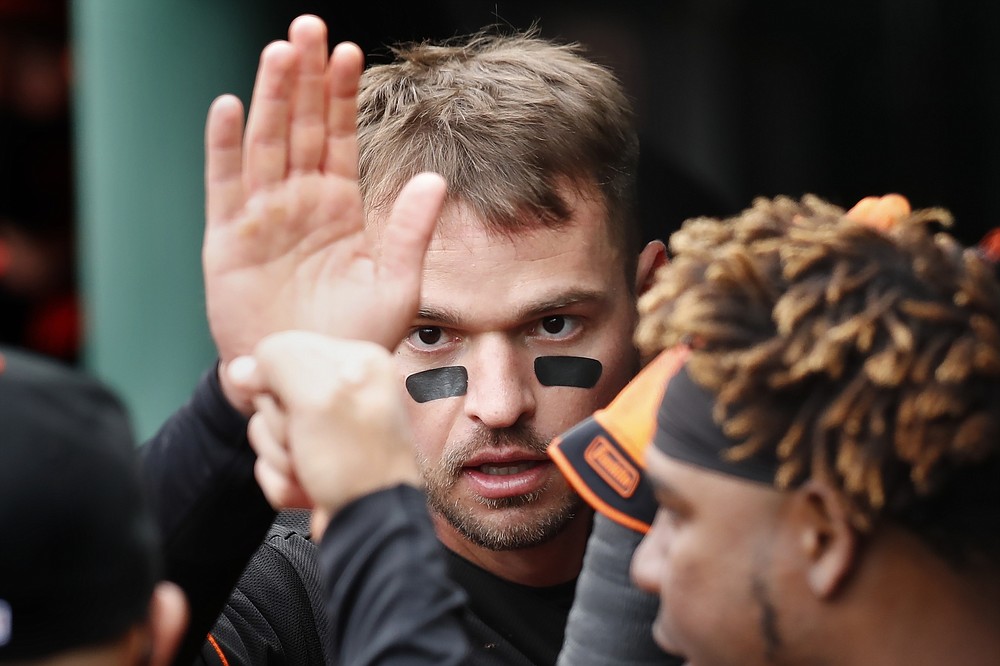 Baltimore Orioles’ Trey Mancini celebrates after scoring on a two-run double by Ryan Mountcastle during the sixth inning of an opening day baseball game against the Boston Red Sox, Friday, April 2, 2021, in Boston. (AP Photo/Michael Dwyer) 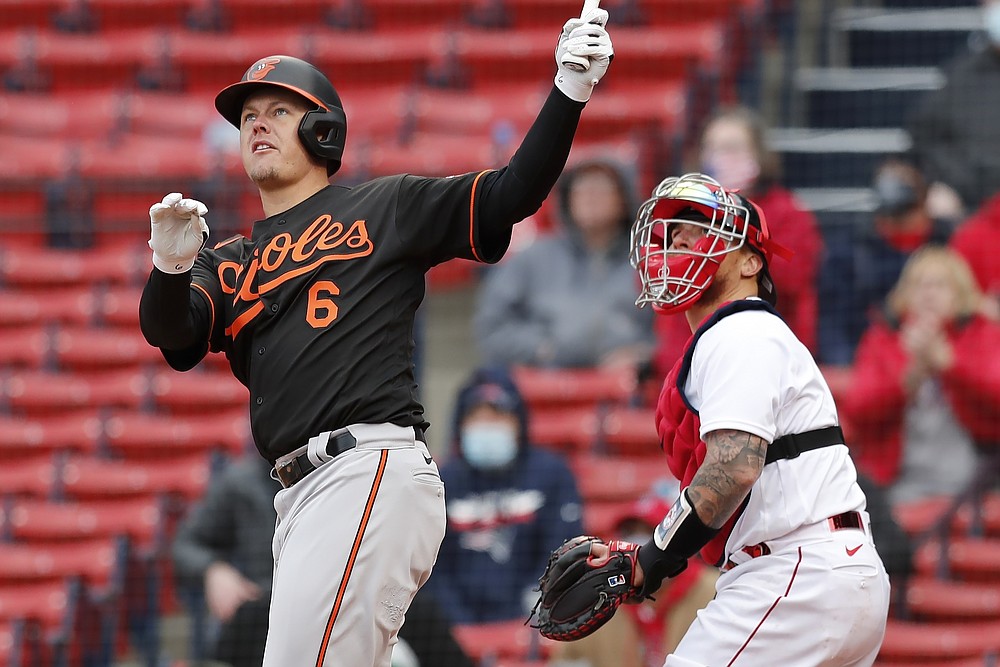 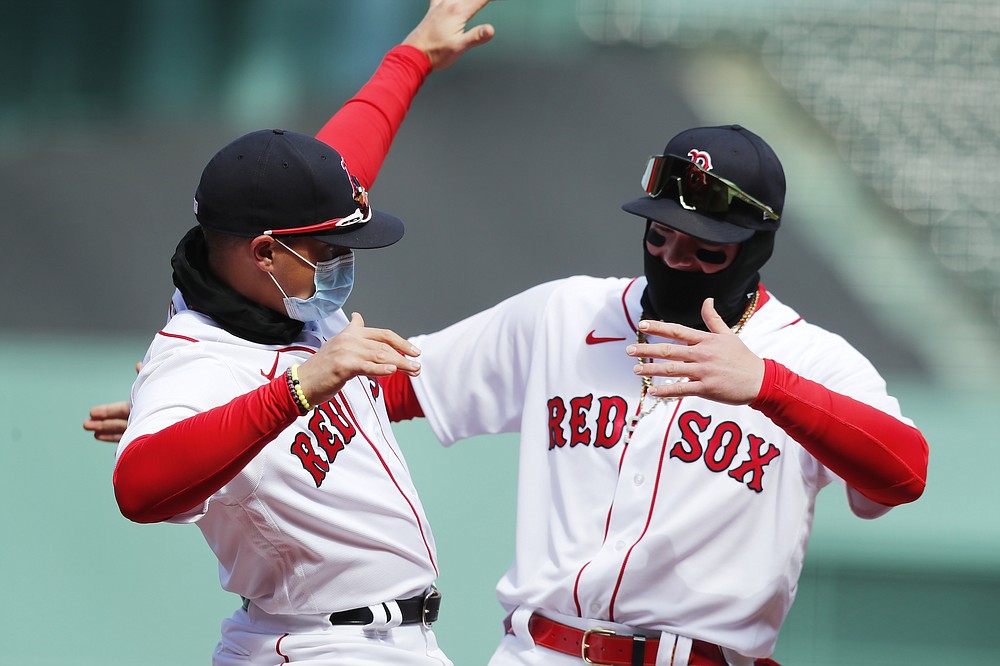 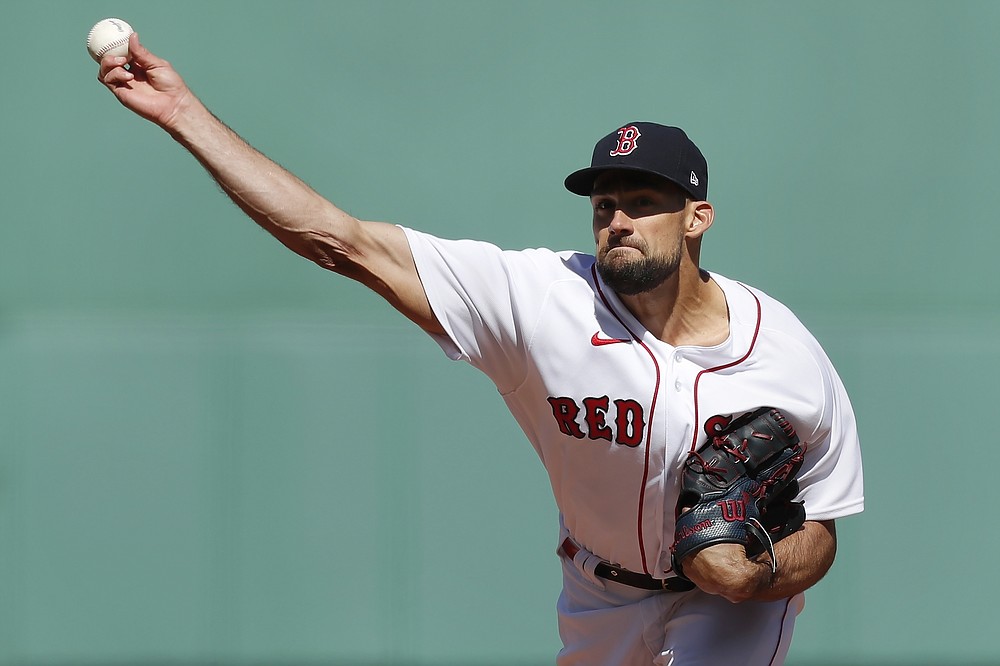 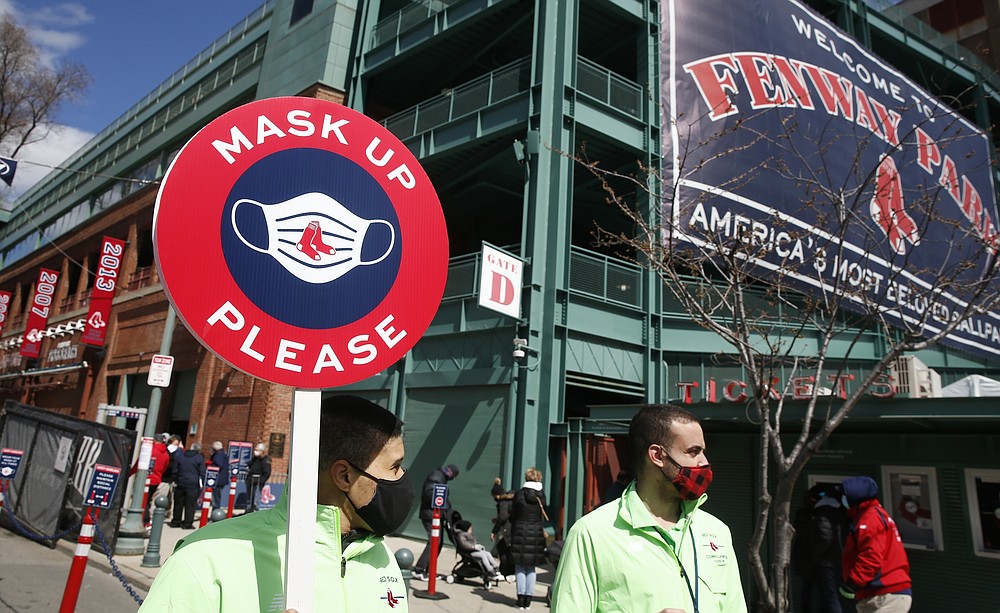 Members of the Boston Red Sox health compliance crew stand at the entrance to Fenway Park before an opening day baseball game between the Red Sox and the Baltimore Orioles, Friday, April 2, 2021, in Boston. (AP Photo/Michael Dwyer) 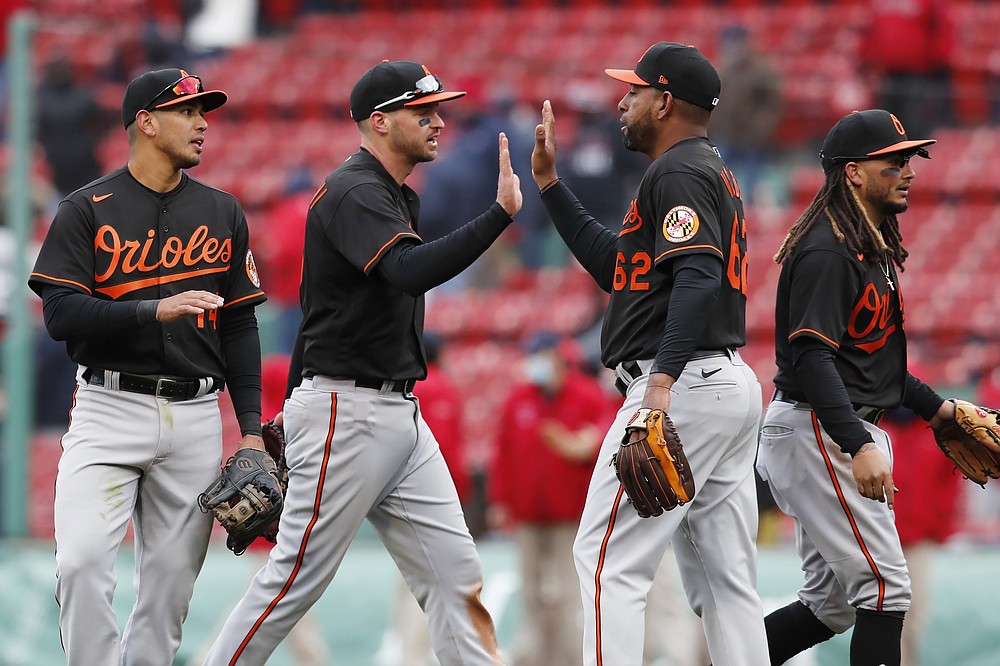