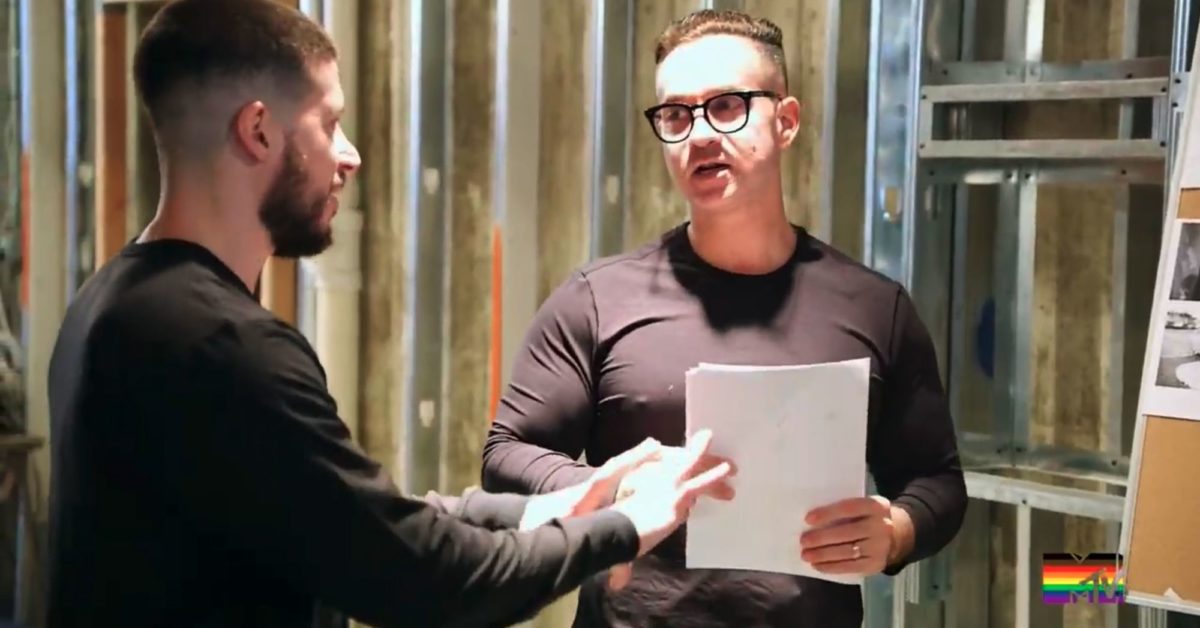 Did MTV forget to ask the original Jersey Shore cast before announcing Jersey Shore 2.0, a reboot of the series that hopes to capture the Jersey Shore magic with a new cast? It seems not, as following the announcement earlier this week that MTV planned to expand the Shore franchise with several new shows including Jersey Shore 2.0, Buckhead Shore, and All Star Shore, every cast member of Jersey Shore: Family Vacation took to Twitter to post a statement in protest with the hashtag #WeAreJerseyShore.

Greetings, comrades! It is I, your El Presidente, official trashy reality TV show correspondent for Bleeding Cool and twelve-time Association of International Dictators (AID) Despot of the Year, bringing you the latest Jersey Shore news and hot goss. And boy is this one a doozy, comrades! Without the support of the original cast, can the Jersey Shore reboot survive?

Mike and Vinny team up to get to the bottom of Angelina and Chris’s relationship troubles on Jersey Shore: Family Vacation. [screencap]”As a cast that took a chance with a network in need, we put our most vulnerable moments on television for the world to see,” the group statement reads. “We gave our all over the past 13 years, became a family, and continue to open our lives for the world. so please understand that we are not in support of a version that will exploit our original show, our hard work, and authenticity to gain viewers. Don’t forget to tune in to an all-new season of Jersey Shore Family Vacation. #WeAreJerseyShore”

The statement has been posted so far by cast members Snooki, J-Woww, The Situation (and his wife, Lauren), Pauly D, Vinny, Deena, and Angelina. It has not been posted by Ronnie, who has claimed he is headed back to the show after taking a break from filming following his most recent domestic violence arrest but has not been seen filming with the cast for the new season. For what it’s worth, the statement was also not posted by original Jersey Shore cast member Sammi Sweetheart, who also did not rejoin the cast for Family Vacation.

In many ways, the cast’s reaction may seem to come out of nowhere. Since the launch of Jersey Shore, there have been ten additional spinoffs produced internationally, some, like England’s Geordie Shore, having at least the same longevity as the original. Even the second season of Double Shot at Love copied the original Jersey Shore format with a younger cast, though that at least also starred Vinny, Pauly, and Nikki. However, those have all been distinguished by a name other than Jersey Shore, making Jersey Shore 2.0, which makes the recent reboot stand out. The cast has not complained about Buckhead Shore or All Star Shore, and Snooki and J-Woww have previously hosted the reunion shows for the now-canceled Floribama Shore, so it’s clear the Jersey Shore name is what they take issue with.

Angelina reacts to a pet psychic telling her dog wants her to divorce Chris on Jersey Shore: Family Vacation. [screencap]And why shouldn’t they, comrades? This is a coup. And when someone attempts a coup, you have to respond by thoroughly crushing it before things get out of hand. Take it from me — I didn’t get where I am by allowing people to infringe on my brand. I got where I am by brutally destroying my rivals, imprisoning political dissidents, and inundating my people with endless state-sponsored propaganda. And then I asked Bleeding Cool or a side gig writing about television, and they were like, “okay, sure.” And comrades, I don’t regret a single thing! Haw haw haw haw!

With the original cast in open revolt, MTV is faced with few options. They could move forward with Jersey Shore 2.0, but the statements by the Family Vacation cast could prevent enough people from watching it to ensure the show’s a ratings failure. That isn’t the first thing going against the show either. Already, MTV has had trouble finding a town on the Jersey Shore willing to allow them to film there, due to the controversies created by the original show. Then there’s the fact that a lot of the content that made the original show successful, such as the rampant misogyny, frequent drunken sex that pushed the boundaries of consent, or the mental and physical abuse of Ron and Sam’s relationship that the other cast members did little to stop, would be impossible to air in the modern cultural climate. And on top of all of that, social media awareness has made prospective cast members savvier and less likely to be authentic, and the show is more likely to be filled with aspiring Instagram influencers hoping to carefully control their brand than young, dumb, and full-of-cum twenty-somethings with no sense of shame willing to expose their most embarrassing moments on national television.

Deena and Snooki party on a boat on Jersey Shore: Family Vacation. [screencap]MTV could also cancel their plans for Jersey Shore 2.0 and move forward with the other Shore shows they have planned. They could retool the show with a different name, which could also solve their filming problems. They could develop a different spinoff with the original cast’s involvement. But it’s clear they’ll need to do something to address the issues with the cast that started the whole franchise to begin with.

Comrades, the statement by the Jersey Shore: Family Vacation cast isn’t perfect. The cast didn’t “take a chance on a network in need.” They gleefully agreed to participate in a show that could give them the chance to achieve fame and riches, and it worked out well for them. And Jersey Shore: Family Vacation isn’t without its problems, largely due to the cast members gaining more control over their images while simultaneously growing older and wiser and realizing that maybe it isn’t such a great idea to televise your worst possible moments. As a result of that, current seasons of Family Vacation can seem overly produced and inauthentic, or worst of all, boring as the episodes revolve around middle-aged parents going out to dinner and engaging in clearly scripted drama. But the cast is right that it’s their personalities that made the original show successful and continues to drive the success of Jersey Shore: Family Vacation, and it would be in MTV’s best interests to placate them.

Either that, comrades, or throw them in the dungeon until they reconsider their impudence. At least, that’s what I would do. Until next time, amigos: socialism or death!