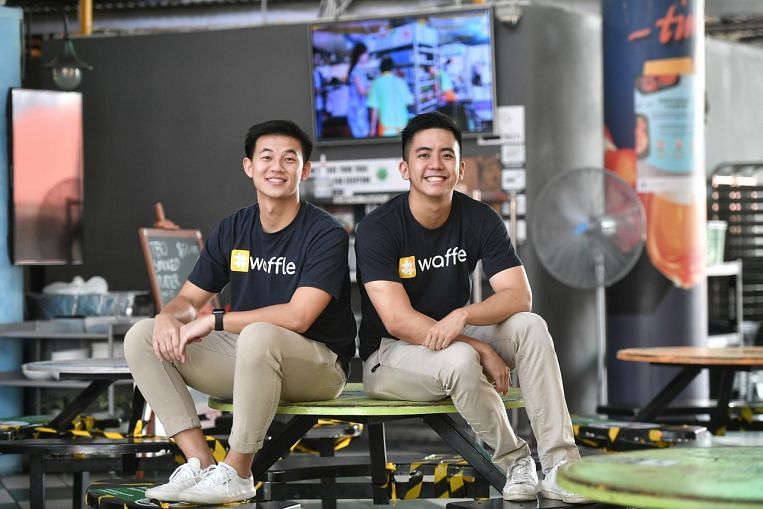 SINGAPORE – Waffles with maple syrup are a welcome breakfast treat or pair them up with fried chicken for an irresistible savoury dish.

The flexibility of the popular food item helped fire up the imaginations of two National University of Singapore students during an exchange programme in Silicon Valley, and spurred them to create a business idea.

Called Waffle Technologies, the firm provides point-of-sale services to brick-and-mortar food and beverage outlets. It aims to provide insights to these businesses by analysing the data from their transactions as well as loyalty and rewards software.

The founders, Mr Auston Quek, 27, and Mr Zames Chua, 26, started the firm about five months ago, after graduating from NUS last year (2020), after having a chat about the idea over lunch – which happened to be waffles and fried chicken.

Mr Quek said: “We wanted our product to be as versatile as waffles are- you can eat them savoury or sweet with all kinds of toppings.

“Our wish is for our programmes to be like waffles – flexible enough for any food and beverage business in South-east Asia to use.”

So far, the firm has racked up a client base of 42 customers and the two founders manage team of six.

However, the transition from the carefree days of undergraduate life to running a business has not been easy.

Mr Chua said: “At first my parents were quite against me starting this business, they wanted me to go get a ‘real job’, but after they starting seeing our product being used by businesses they began to share our excitement.”

Their strong friendship is what underpins the early success of their new business, both men said.

Mr Quek, who graduated from NUS with a degree in communications and new media, said there is no truth to the cliche about not mixing business and friendship.

He said: “We started off as housemates and that is how our relationship grew but the key for us now as business partners is how we are able to achieve alignment, in terms of passion for and our ideas for the direction of the company.”

The two hit it off right away, and when they both got a chance to spend a year in Silicon Valley in the United States, they decided to rent a house together, along with a third student.

That was the experience that gave them the confidence to take the leap of faith to start a business, they told The Straits Times in an interview.

Said Mr Quek: “Taking classes with students at Stanford University and interning at start-ups there showed us that Singaporean students are just as technically skilled as the people starting tech companies overseas. But a lot of the time, we just lack the confidence to pursue ideas.”

The founders are nursing regional dreams for their business but said relationships with their customers come first and that is something they do not want to lose sight of as they grow.

Mr Quek said: “Even in five years time or 10 years time as we scale, we want to still be in close contact with the first customer we had who took a chance on us, understanding their needs and concerns.”