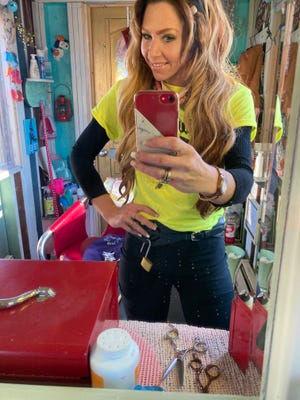 When Mandy Jane Ashenfelter of Greenfield was in prison, she figured her career as a hairstylist was over.

She had worked as a stylist at a barbershop before she got her fifth OWI in June 2014.

She was sentenced to 18 months in prison, and her license to cut hair was set to expire while she was behind bars. She didn’t know what she would do when she was released.

She never thought serving a prison sentence would give her the creative and entrepreneurial spirit to run a mobile hair-cutting salon, the Hair Hut, just a few years later. After starting her business in July 2020, she has a schedule with locations in Menomonee Falls, Milwaukee, Oak Creek and Brookfield.

More:A massage therapist feared COVID would close her Sussex clinic, but business has picked up and she has opened a second location

With only a comb, toilet paper, water and the limited items available at the prison canteen, she was determined to have her hair and makeup look their best even when she was in lockdown for 23 hours a day.

Although she did not realize it at the time, the way she conquered her beauty challenges in prison and helped other inmates with theirs gave her the skills she needed for her future business.

Prison ‘gave me new ideas to be creative’

Ashenfelter said she came up with creative ideas while she was alone in her cell.

Ashenfelter found that by wrapping her hair around toilet paper and then sleeping on it, she could make good curls.

She melted Jolly Ranchers — which were sold at the canteen — and used it as hairspray. She perfected using pen, pencil, chalk and colored pencils as eyeliner, foundation and mascara.

She learned to color her hair using red Kool-Aid mix — also available at the prison canteen — adding water and wrapping a towel around her hair to sleep in at night.

“It (her hair coloring) lasted about a week,” she said.

She said her most unique beauty secret was rubbing deodorant on a magazine. The color would transfer to the deodorant, which she could then use as makeup.

“If it was teal, for example, then I had teal eye shadow,” she explained.

When she finally earned more privileges such as eating lunch with the other inmates, many expressed amazement at her appearance and asked:  How can you look like that?

“I realized hair and makeup are so important to me, and that I need to still do this (as a career),” she said. “It (being in prison) gave me new ideas to be creative.”

She started cutting and styling other inmates’ hair when they had guests come in or if they had to go to work. Using only having toenail clippers, a razor and, later, scissors made for children, she found creative ways to do the job. Eventually, she earned the trust of the prison staff, who allowed her to use a room, with limited supplies, so she could cut and style hair more often.

She later learned that finding ways to creatively do more with less as well as how to follow the rules but find ways to achieve her goals were the foundation of building her business from scratch.

“This made me feel good and that I should be cutting hair,” she said.

Learning to be an entrepreneur

While she had work-release privileges at a facility in Milwaukee, Ashenfelter got a job at a franchise salon and, with the help of her family, renewed her license and worked her way up to a manager position.

She saved every penny she made when she was back at work and out of prison, she said, and observed what worked and what did not work at her job. She then started planning for her own business. She thought that the whole scheduling side of making appointments can be chaotic so she does walk-ins, on a first-come, first-serve basis.

She wanted a business that was flexible to raise her 9-year-old son, Iren Abler,  provide a service to the community and just be different, she said.

She started building her salon — a 6×9-foot structure mounted on a trailer pulled behind her vehicle — before the pandemic hit.

Like many others, she found herself out of work for two months during the pandemic. She used that time to focus on finishing her business.

She concentrated on cutting hair for her neighborhood in a popup tent until her “tiny house” salon was ready July 4.

“People did not want to go out in a big salon,” said Ashenfelter. “The need was there for this (her mobile business),” she said.  “I want to keep it simple … I only do haircuts, as that is my strongest.”

She said that some people have threatened to call the police, questioning whether her business is legal. But she said it meets all the requirements; she pored over all the business rules and regulations, learned her rights and found out how to creatively work it out — skills she learned in prison.

“This (serving a prison sentence) has made me who I am today,” she said.

‘Every day is a gift’

Ashenfelter said that being able to feel good on the outside helped her get through her time in prison.

“It makes everything else beautiful,” she said. “It helps.”  While many people say they would not like to go back to prison, Ashenfelter said she might be an exception — though not as an inmate. She would like to take her mobile business to a minimum-security correctional facility to cut and style the inmates’ hair as a service.

She said when she got out of prison, she had the choice to stay sober or to succumb to the temptation to drink with the plentiful number of bars in the Milwaukee area.

“You can either choose the right way or the other way,” she said. “It depends on your   attitude.”

For any scheduling updates or for more information, find the HairHut By MJ on Facebook.