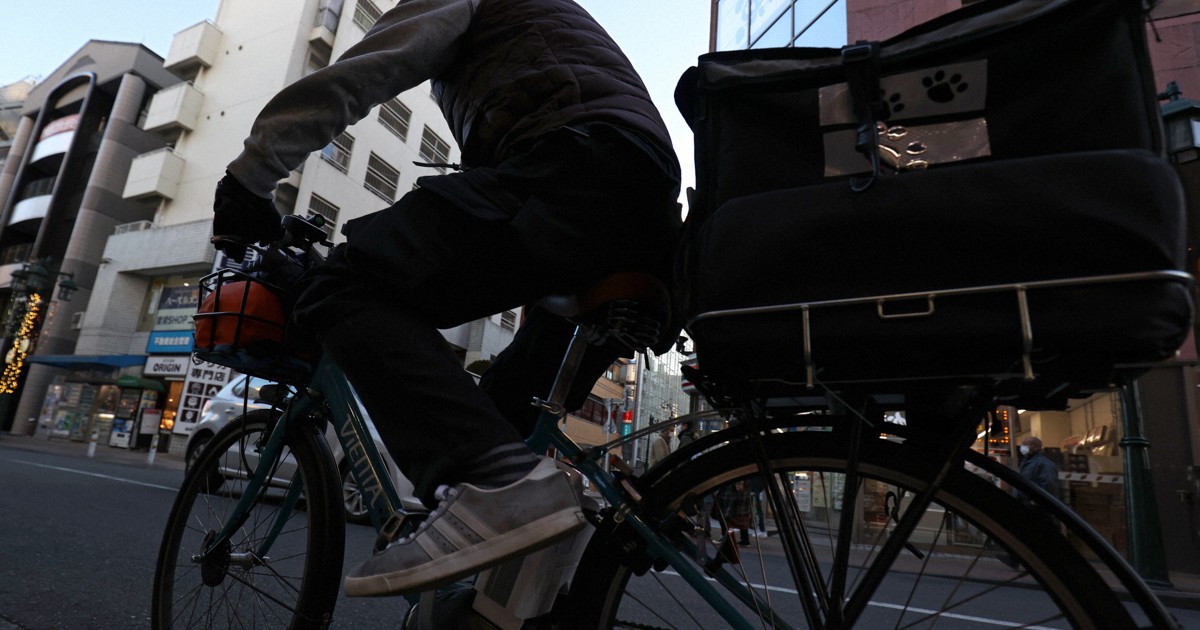 TOKYO – The backs of people driving by on streets on bicycles or motorcycles wearing large square thermal bags has become a typical scene in urban areas of Japan. These people work for food delivery operators like Uber Eats. These jobs are strongly associated with young part-time workers as they can use their free time and take delivery requests from their smartphone. The Mainichi Shimbun spoke to several workers in their fifties who began making such appearances amid the coronavirus pandemic.

In the corner of a roundabout in front of JR Tachikawa Station, about 30 kilometers from the heart of Tokyo, a man with his bicycle pulled up looked at his smartphone screen. “I got a warning. An order has just come in.” So said the man before cycling his electric bike towards a nearby McDonald’s. It was mid-December 2020 and a little colder outside than in central Tokyo, but the man kept warm as he pedaled and put his down jacket in the front basket of the bike.

The 51-year-old man has a wife and a child and his usual place of work is a hotel in the heart of the capital, where he has worked for 20 years. However, guests using the hotel have decreased 80% since about March last year as the coronavirus spread, and the man has had virtually no work there. Although his employment contract is renewed every year and guarantees payment of his basic salary, he has not received overtime pay, which is a large part of his income. His monthly salary has dropped by 100,000 to 200,000 yen (approximately $ 959 to $ 1,918).

The man lives in a house in the Tachikawa suburb of Tokyo and has a mortgage with a remaining term of 15 years. His wife’s childcare-related job has not been affected by the coronavirus, and her life is not at risk of falling apart immediately. However, her daughter’s junior high entrance exams are coming up for the family, and school expenses, including summer course fees, are a huge burden. “I would like to let my daughter go to school without restricting various things,” said the father. He accepted the challenge of working as a delivery driver, which appeared to be a low risk of infection job that could add to his income.

The man first bought a large backpack online that included an Uber logo and an insulation feature. It took three weeks for the backpack to arrive after ordering, perhaps because many others had decided to start this side gig in a state of emergency.

The process of starting the job is simple and does not require an interview. The system works in such a way that as soon as a person presents a personal ID and agrees to the specified conditions, they can immediately receive orders. The man made his debut as a delivery worker on his wife’s bike last May.

Uber Eats deliverers can view orders in nearby stores via a smartphone app based on location information about where they are. You can then decide whether they will possibly take over the deliveries.

The man’s first delivery job was ramen for two, which is said to be difficult for beginners. He remembered being nervous while transporting the food and worrying about spilling it. The inside of his mouth appeared to have dried out after the delivery and he returned home exhausted that day from the three deliveries he made.

As he got used to the job, he worked longer. On some days he delivered from 9 a.m. to one hour after midnight the following day. After a while he bought a used bike with electric pedals. He found that he had lost 9 kilograms. Talking about being nervous all the time stepping on roads next to cars, the man said, “You will be in an accident if you do not concentrate well. Even if there is a bike lane, it’s narrow and so is it There are times when there are cars in close proximity. It’s very scary. ”

The Mainichi Shimbun met another man aged 50 outside JR Hachioji Station. He said he lives in the suburb of Hachioji, Tokyo, and works as a taxi driver. His company has temporarily ceased business due to the coronavirus and his commission has disappeared. With his home loan still running for 35 years, he feels a monthly drop in income of 200,000 yen (about $ 1,920). Although he was looking for part-time jobs as a security guard, among other things, he couldn’t find any and began a side job as an Uber Eats delivery driver. He made his debut on his son’s three-speed bicycle with a basket attached, delivering meals around town. He lost 7 kilograms when he sweated a day, unlike his job as a taxi driver.

The term “jizo” (Buddhist statue) is apparently used among these deliverers to describe the action of providing near areas where restaurants are concentrated in order to take orders efficiently. It makes sense to see lots of delivery people near McDonald’s stores receiving lots of orders.

When large numbers of deliverers gather around facilities, they exchange information with one another, e.g. B. Which restaurant serves meals quickly or which equipment is suitable for attaching cell phones to bicycles.

Such interactions through information exchange go beyond generations. The aforementioned man who works in a hotel also chatted with a young delivery man during the interview and asked each other if they had received notifications for orders.

In the central part of Hachioji, there is a place known as “Jizo Park” among the delivery people. The place has benches and is comfortable place to stay. The taxi driver said he initially lingered a little out of the way in the smoking room but became a regular park after being approached by a younger delivery man.

A male hotel clerk, right, currently working as an Uber Eats delivery driver, waits for orders from another delivery driver in the suburban Tachikawa, Tokyo, on December 17, 2020. (Mainichi / Junichi Sasaki)

Delivery workers contact and encourage one another through Twitter, Line and other social media, and the man said he did not feel lonely even though the majority of his staff were younger than him. He said, “It’s a healthy community with no hierarchy. I get stimulated by talking to young people.”

Styles of work in which employees are not part of an organization and repeat one-off jobs, such as Uber Eats delivery drivers, are known as “gig work.” Pay is unstable and the work does not guarantee permanent employment, but the male hotel worker said, “The work helped my household budget and I would have felt depressed if I hadn’t done anything.”

There was also one person who felt “saved” by this type of work, regardless of the coronavirus pandemic. Shuichi Taira, 52, who supplies in Hachioji and Tachikawa, had problems with the workplace relationship in his company and took the big step to become a full-time supplier from spring 2020. He said the job is worth it as it is not tied up to any organization and can actively share information with other deliverers regardless of age. Some liberators call Taira by his nickname “legend” and show their fondness for him.

While gig work has the merit of a free style of work, it also has its challenges. While workers can earn an increasing amount by tackling multiple jobs efficiently, their income will not grow in cases where their work is wasted.

Voices of dissatisfaction among delivery workers in Hachioji increased from late last year. Although it was largely determined that cyclists would get jobs in relatively nearby areas while motorcyclists would get remote orders, more cyclists were also assigned the latter.

Unlike in the heart of Tokyo, where delivery agents can take a range of orders by moving from one delivery location to the next while traveling a short distance, it is difficult to continue taking jobs in nearby areas in the suburbs. Often times, to get the next order, delivery workers have to go back to the city center, where the restaurants congregate, and travel a long distance. The number of orders that can be physically processed is limited.

Although it varies by region, the base wage for Uber Eats is several hundred yen (roughly several dollars) per order, and additional payment will be made depending on the time period and weather. However, the amount of the additional fee largely depends on the company’s decision. Taira touched that reality and said, “I have complex feelings mixed with appreciation for Uber.”

While Uber allows contract jobs that an employee can do individually in their spare time, whenever they want, the unit price is low and workers have to take on many jobs. The hotel clerk, who apparently also delivers on weekends, said, “I have to do this, otherwise I won’t be able to supplement the drop in my income, and most of all, I worry when I’m not working.” in a way. “Although his contract with the hotel is renewed in March, he doesn’t expect the company’s performance to recover by then.” I wouldn’t be surprised if they fired me. I would like to make money if I can. ”

“I wonder if it has to do with my age. My wife asked me how my knee was doing. It must be her way of asking how long I’m going to do this,” the man said. Although he wants to get back to his main occupation, people have not yet returned to the entertainment district near Shinjuku Station, which the driver relied on for a major source of income.

The men step further and shoulder not only the large delivery bags, but also the bitter needs of their lives.