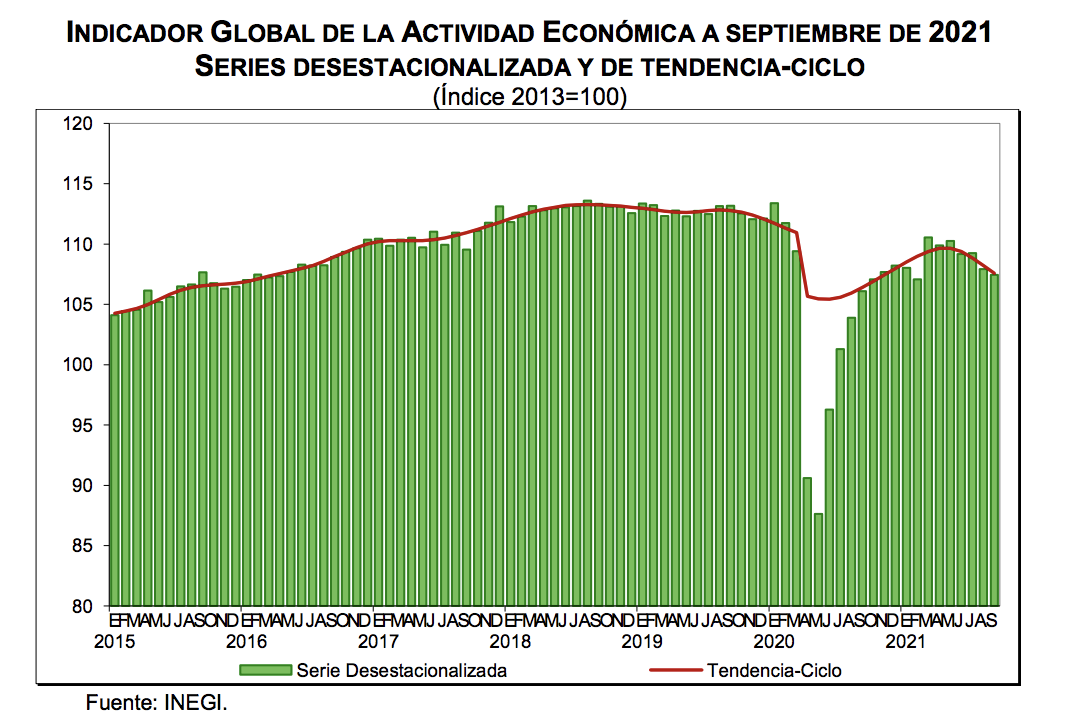 Mexico’s economy contracted 0.4% in seasonally-adjusted terms in 3Q21 after 1.2% growth in the second quarter, according to statistics agency Inegi

Analysts pointed to the implementation of a new outsourcing law to explain the larger-than-expected downward revision to the initial estimate of a 0.2% contraction.

On Thursday Inegi also released the final estimate for year-on-year growth in 3Q21, which was revised down to 4.50% from its preliminary estimate of 4.53%.

Despite the reading, Moody’s Latin America head of economic analysis Alfredo Coutiño said Mexico “will still end the year with a rebound” thanks to the negative comparison base with full-year GDP growth now estimated at 5.3% after an 8.2% contraction in 2020.

Local lender Banorte’s economic analysis team said in a research note that the bank is holding onto its 2021 GDP forecast of 5.7%, “albeit with slight downside risks after the report.”

“Nonetheless, available data for 4Q21 shows signs of improvement, in line with our call of a resumption of the recovery in the period,” said Banorte.

In a research note Coutiño said the surge in COVID-19 infections with the Delta variant led to mobility and other restrictions on businesses and employment reaching a new peak at the end of August.

Thirdly, the country’s new outsourcing law, which severely restricts the practice across all industries, proved to be a key factor for the 3Q21 revision.

On this point, Nikhil Sanghani, Latin America economist at Capital Economics, said: “The breakdown showed the contraction was almost entirely due to an outsourcing law that hit services output.”

“[The Inegi report] showed that almost all of the contraction in GDP was concentrated in business support services – output in that sub-sector slumped by an eye-watering 50% q-o-q, shaving almost 2%-pts off overall q-o-q GDP growth in Q3,” he said.

Output expanded in most other services, with only five of 15 components showing negatives, hence “the oddity” of a 0.9% decline in the services area of growth is mainly due to this one component, said Sanghani, with employers banned from hiring subcontractors.

“Labor market data from Inegi … showed that workers in business support services halved over Q3 as a whole which, based on the methodology for calculating GDP, directly impacted the stats office’s measure of output in this sub-sector,” he added.

Sanghini said other labor market data for formal private sector employees shows the number of temporary workers has dipped in the last few months, but this was offset by an increase in the number of permanent staffers.

“Accordingly, most subcontracted workers have probably been hired within businesses or moved to other industries,” he said, and with the majority of Mexico’s labor market completely outside the formal sector, “economic activity probably did not fare as badly as the Q3 GDP figures imply.”

According to Inegi’s monthly economic activity indicator (IGAE) for September, also released Thursday, industrial production dipped 1.4% from August, while services fell 0.3%, hit by the implementation of the new law.

The following graphic tracking IGAE through September, shows a deceleration in activity from this year’s April-June peak.

“Despite higher mobility and confidence levels, these [IGAE] figures are consistent with renewed difficulties and cautiousness due to COVID-19, as well as potential headwinds from higher inflation.” said Banorte.

Coutiño expressed concerns for the recovery next year with setbacks potentially tied to domestic policy interventions and their impact on investment.

“The economy’s moderation in the second half of the year, caused by the prolonged supply disruptions and still anemic investment, is raising concerns about the recovery in 2022,” he said.

“One unfavorable factor is the government’s persistence to implement measures to limit competition and restrain the participation of the private sector in the economy, which keeps private investment reticent,” Coutiño added.

And despite the government’s planned investment increase in infrastructure next year, around 18% in real terms, public sector capex as a whole remains at only 15% of total investment in the economy. As such, said Coutiño, the economic recovery in 2022 will remain restrained, “advancing at a rate between 2% and 2.5%.”

Finding, Hiring, and Employee Retention in a Post Pandemic World