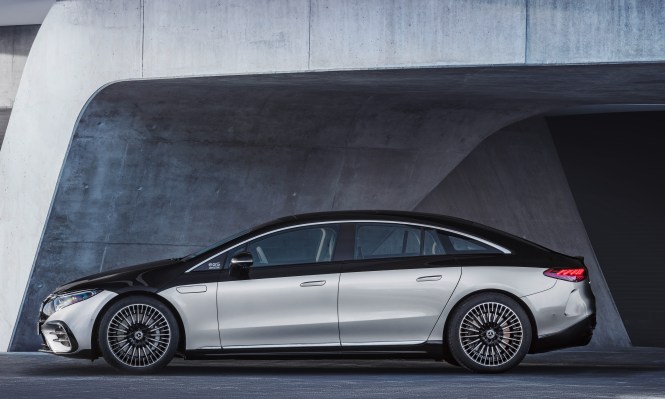 Mercedes-Benz laid out Thursday a 40 billion-euro ($47B) plan to become an electric-only automaker by the end of the decade, a target that will push the company to become more vertically integrated, train its workforce and secure the batteries needed to power its products.

Mercedes has provide some wiggle room in that ambitious goal, noting that it will be “ready to go all electric by the end of the decade, where markets allow.” This could mean that some combustion engine Mercedes, which are already equipped with 48-volt mild hybrid systems, will be produced and sold beyond the decade.

“We have a very clear plan to rapidly scale BEVs; we want to get on this journey to a BEV (battery electric) only world,” Daimler AG and Mercedes-Benz AG CEO Ola Källenius said during a media call after the announcement. “We want to be the people that make that happen, not just let it happen for us and go with the flow, but really taking initiative. And we believe also that the luxury segment, where we belong, has all the hallmarks of being a leading segment for this transition.”

The company has already taken some action, announcing Thursday it acquired UK-based electric motor company YASA and has determined it will need battery capacity of more than 200 gigawatt hours. To hit meet those needs, Mercedes plans to set up eight battery factories with partners to produce cells.

The new plants, one of which will be located in the United States, is on top of the company’s already planned network of nine factories that will be dedicated to building battery systems. The company said it will team up with new European partners to develop and efficiently produce future cells and modules. That “European partners” designation is strategic and one that Mercedes says will ensure the region “remains at the heart of the auto industry.”

Mercedes said it has partnered with Sila Nano, the Silicon Valley battery materials startup that raised $590 million earlier this year, to help it improve its next generation of batteries. Specifically, SilaNano is helping Mercedes  increase energy density by using silicon-carbon composite in the anode, which should boost range and allow for shorter charging times.

Mercedes is also looking into solid-state battery technology and said it is in talks with partners to develop batteries with even higher energy density and safety.

The plan unveiled Thursday piggybacks on previous goals to build and sell more EVs. Back in 2017, Mercedes said it would electrify — which means gas-hybrid, plug-in hybrid or battery electric — its entire lineup by 2022. The German automaker said Thursday that by next year it will offer battery-electric vehicles in every segment that it serves.

Its EV-only plan will accelerate from there. By 2025, the company said its three newly launched vehicle architectures will be electric-only. The company said it expects that all-electric and hybrids will make up 50% of its sales that’s up from its previous guidance of 25%. Customers will also be to choose an all-electric alternative for every model the company makes.

Källenius said the company’s goal marks a “profound reallocation of capital.” He stressed that the company’s profitability targets would be safeguarded and met despite this hefty investment and shift away from the internal combustion engine.

To meet this target, Mercedes is launching three electric-only architectures which will form the basis of all of its new vehicles. It’s so-called MB.EA platform will be used for its medium to large passenger cars, while AMG.EA will underpin its performance Mercedes-AMG cars and the VAN.EA will be dedicated architecture for electric passenger minivans and light commercial vehicles. The company has already announced its “electric first” compact car architecture, known as MMA, will launch in vehicles by 2024.