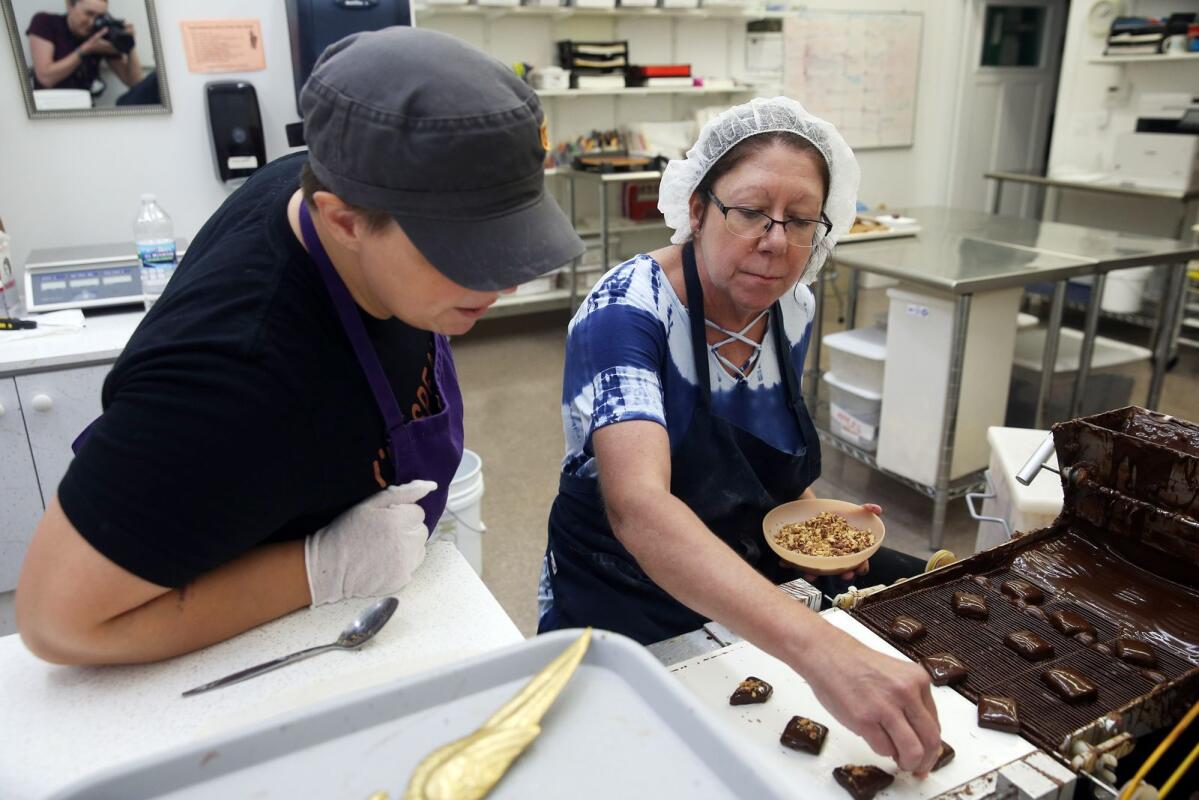 Katy Davis (left) watches as Kathie Schlotterback shows topping toffees with a spicy almond mixture at The Marion Chocolate Shop in Marion on Tuesday, July 6, 2021. Davis and her husband, Ben Davis, reopened the shop on July 8 and brought back previous employees including Schlotterback. (Liz Martin/The Gazette)

The Chocolate Shop in Marion has reopened with new owners and a slightly new name, too.

The store, which has been around for close to two decades, is now officially named The Marion Chocolate Shop.

New owners Ben and Katy Davis reopened the shop’s doors on Thursday, the first time since before the pandemic.

“We added Marion to the name because we truly are Marion’s chocolate shop,” Ben said. “We’re committed to being here for the town.”

In the future, the couple hopes to add more days so the shop is open four to five days a week.

Ben Davis breaks apart toffee before it is coated in chocolate at The Marion Chocolate Shop in Marion on Tuesday, July 6, 2021. Davis and his wife, Katy Davis, bought the longtime shop and reopened July 8. (Liz Martin/The Gazette)

Ben, who was serving full time in the Iowa National Guard, was looking for a new opportunity to stay closer to home and have more time with their young children, so becoming a small-business owner was a great opportunity to pursue, he said.

“We always wanted Ben to have a job that kept him home more often,” Katy, who also works as an occupational therapist, said. “The National Guard had him moving around a lot.”

When the shop was advertised for sale by previous owners Gae and Deane Richardson, the couple initially joked about buying it. But the “what if?” soon became a reality.

“We were sitting on the porch and talking about commuting would affect our family and we saw Gae’s post about the shop being for sale and as a joke, I said we should buy it,” Katy said.

“Within six days, we went from knowing I’d be commuting and out of the house a lot to pursuing owning the shop,” Ben added.

The couple has no prior experience with chocolate, but neither did the previous owners when they opened the shop years ago.

“They said if they could do it, we could do it,” Ben said. “Being in the National Guard for almost 20 years has really translated to the operations side of the business: managing vendors, tracking inventory. I’m an engineer so it all kind of carries over.”

“We also have part-time employees that stayed with us that were here before,” Katy added. “They have years of prior knowledge. They are the experts who bring in all the wisdom here and they will make this place a success.”

The two also have taken lessons from observing businesses during the pandemic and said they want to add online options.

“We will be setting up in-store pickup so people can shop from the comfort of their home because that’s been so successful over the past year,” Ben said.

Katy added that the shop will be adding new flavors as well and also are welcoming any ideas from customers.

“I want to do a ‘flavor of the month,’ ” Katy said. “We make a small batch that we may only make once that year of a certain flavor and so if you snooze, you could lose. I think that would be really fun.”

Almonds are placed on freshly-coated chocolate-covered toffees at The Marion Chocolate Shop in Marion on Tuesday, July 6, 2021. (Liz Martin/The Gazette)

One aspect of the business the couple wants to keep in place is partnering with other local businesses for events or flavors.

“We don’t want to add coffee or ice cream or anything here because we have that stuff in the area,” Ben said. “We want to do what we do really well and we also want to advertise our other local businesses too.”

Ben and Katy both said they are excited for this new chapter in their lives and want to welcome the community’s feedback and ideas on their social media pages.

“We think we can really have fun with this and keep interest by adding new things regularly. If we do things over and over again, it will wear us out. So experimenting is a lot of fun,” Ben said. “We want customers to know we are open to any feedback. If you’re not happy with something, shoot us a message on Facebook or if you go somewhere else and see something cool, we want ideas and input. We’re just excited to get going.”

Chocolates are boxed in preparation for the July 8 reopening of The Marion Chocolate Shop in Marion on Tuesday, July 6, 2021. (Liz Martin/The Gazette)