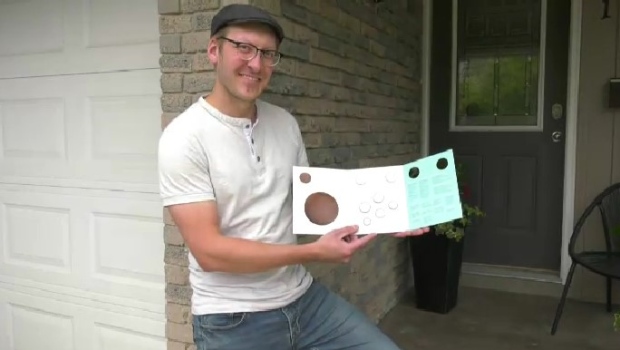 KITCHENER —
The Royal Canadian Mint has released a new coin to celebrate 100 years since the discovery of insulin, and it features the work of a Kitchener artist.

“It’s just an honour to be able to be a part of Canadian history,” says Jesse Koreck.

His illustration is now on the newest toonie.

The Mint said on their website: “This year marks the 100th anniversary of a Canadian medical breakthrough that has had global impact. Today, and every day, we celebrate the discovery of insulin as a treatment for diabetes.”

The coin has an image of a mortar and pestle, a vial and a flask, as well as red blood cells, glucose and insulin molecules. At the top of the coin, there is bright blue ribbon-like swirl that represents a monomer, one of the building blocks of the insulin molecule. The colour blue is also used for diabetes awareness.

The new toonie is not Koreck’s first and only engraved design.

“My first coin that was actually minted was the farewell to the penny,” he says.

“I had just completed my degree, and an art director from the Royal Canadian Mint found some of my artwork online. This is going back 10 years ago. They saw some of my scientific illustrations and we started collaborating after that, and it’s been history ever since.”

Koreck, who graduated from Sheridan College, has now finished 10 different coins for the Mint.

This is his first coin to go into general circulation.

“Conceptualization and illustration is done in about a week or two,” he says. “Very fast turnaround, but then the actual process of review and some iterations here and there can span about a year or so.”

Illustrating coins is just a side gig for Koreck. He also works as a designer for a K-W tech startup.

— With files from CTVNews.ca