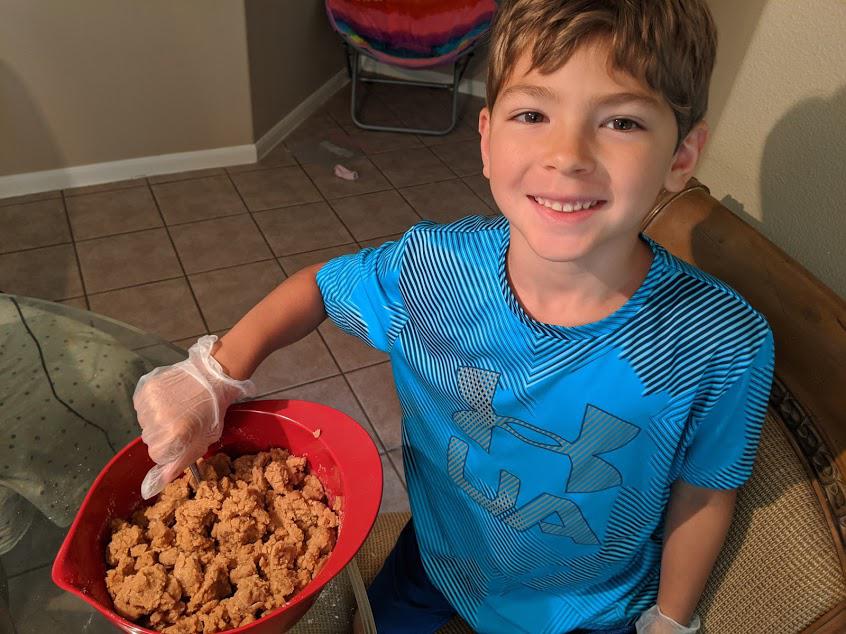 Last summer 7 year old Isaiah Hodge decided he wanted an electric unicycle. When his father told him to pay for it himself, Isaiah started a successful dog treatment business.

On HoustonChronicle.com: “Redemption” kicks in as the Seven Lakes HS cheerleaders win the state

Katy’s Rylander Elementary second grader has since sold around $ 1,000 of his Puppy Dough goodies for $ 5 per dozen.

When Isaiah realized he needed $ 650 for the unicycle, he enrolled in Kidpreneurs, a program for children who want to start a business. He spent a few weeks learning and thinking about business ideas. His father, Jason Hodge, suggested growing and selling watermelons, but Isaiah came up with the idea of ​​making treats for dogs.

Although Isaiah’s maternal grandfather trained dogs in the military, Isaiah and his family actually don’t have a dog. Hodge found it a little funny when Isaiah decided to focus his new business on puppies.

“I like dogs a lot, so I think the dog treatment idea would be good for me,” Isaiah said.

Puppy dough comes in shaped squares made from peanut butter, banana, and coconut flour. Isaiah chose the recipe because the three ingredients together have a solid consistency and the process can be done by Isaiah who is not yet cooking or baking. Because he is allergic to peanut butter, he wears gloves and a mask to work.

Isaiah usually sells a few dozen goodies a week. It takes about an hour to complete two dozen. He said flattening the dough into the mold was hard work. Homework always comes first on weekdays. Isaiah does most of the work on weekends when he has more time.

The Puppy Dough Venture gave Isaiah’s life and business lessons. Occasionally Isaiah makes a series of goodies and doesn’t work to promote them, so some of the goodies go bad before he can sell them. His father says that’s okay: Isaiah is 7 and sometimes just wants to be a child.

On HoustonChronicle.com: The Katy ISD Bond Committee will learn more about the proposed package

Isaiah also learned about purchasing decisions. At first he wanted a onewheel that is like a skateboard with a wheel because his uncle has one. However, that costs around 1,000 US dollars. Isaiah instead opted for the cheaper unicycle.

By about September, Isaiah had saved the $ 650. He said riding the electric unicycle was his favorite part of selling puppy dough. He and his father drive several miles and he is now learning to reverse. You sometimes join a group in Houston.

“It feels good, and now I’m starting to get the hang of it because we went to the Houston Ride thing. And now I can drive in gravel and concrete and drive over bumps, ”Isaiah explained.

Another highlight for Isaiah is taking the goodies to people’s homes and meeting their dogs. One of his first customers liked the puppy batter so much that he jumped on it. Now Isaiah is a little tired of big dogs at times.

In the summer, Katy Chamber of Commerce welcomed Isaiah as the youngest member. Isaiah has not yet attended any meetings due to the precautions taken for COVID-19 but plans to have a booth at the B2B Business Expo in April.

“I think Isaiah is an incredible addition to our church, not just our chamber. His entrepreneurial spirit should inspire anyone with a dream for the benefit of their community, ”said Matthew Ferraro, President and CEO of the Katy Chamber of Commerce.

On HoustonChronicle.com: In the midst of the rapid growth in enrollments, Katy recognized ISD planner

Hodge owns Medical Fitness Pros in Katy and wanted his son to learn how to make his own money. So he encouraged Isaiah to start a company to buy this unicycle himself.

“He’s a smart boy and he gets bored very quickly and needs to be challenged,” said Hodge. “… I felt that something like owning his business would teach him how a business works: costs, expenses and just understanding what it takes to make this happen.”

Hodge said it was an interesting experience and something positive in the midst of the pandemic to watch the business start and watch the people who support it.

He remembers that Isaiah is young and doesn’t want the business to get too big. Over Thanksgiving and Christmas, Isaiah had orders for about 20 dozen goodies. His parents helped so that he would not be overwhelmed.

On HoustonChronicle.com: Giving back: Katy’s resident feeds 300 people for his 40th birthday

“He did well. He made up the name himself. I mean honestly, he did a lot himself. I helped him with little things along the way, but he took a lot of initiative, ”said Hodge.

Puppy Dough is available on Facebook and Instagram, as well as at Waggin ‘Tails Pet Ranch in Fulshear. Isaiah donates 10 percent of his profits to Boys & Girls Country of Houston.