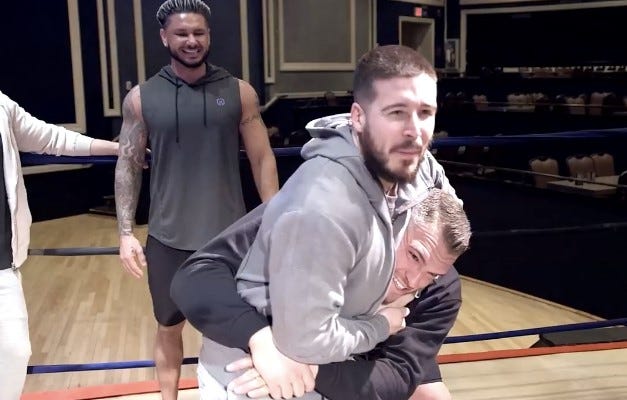 Watch out, Vinny Guadagnino: Zack “24” Clayton knows his way around a wrestling ring.

His expertise was demonstrated on the Thursday, July 15, episode of “Jersey Shore Family Vacation” when he smacked, dropped and suplexed Guadagnino.

Er, it was all in good fun.

“He’s a stripper, take it easy,” said Pauly DelVecchio, referring to Guadagnino’s side gig as a Chippendales dancer.

Guadagnino was wary of Clayton, Jenni “JWoww” Farley’s fiance, as he’s been riding him pretty hard over the last two years or so. Case in point, his comments on the Oct. 10, 2019, episode where Clayton appeared to grab the backside of Angelina Pivarnick while Farley was all but passed out on Clayton’s lap during a night out in Las Vegas.

“I said some questionable stuff about him back in the day,” Guadagnino said. Then in flashback, he said: “Jenni looks like she’s dead, 24 has his hand wrapped around her throat. It reminds me of ‘American Psycho.’ ”

The Clayton-Pivarnick incident was played up on “Jersey Shore Family Vacation,” and apparently caused a temporary rift in the relationship of Clayton and Farley.

As for Clayton’s wrestling career, he’s picked up a few matches in All Elite Wrestling as of late. Next week, it’s “Guido Mania,” filmed at the Woodloch Resort in the Poconos, as Clayton and the cast members will be putting on a wrestling show.

It’s surprising that none of the female roomies are wrestling — they have a lot of experience in the ring. Nicole “Snooki” Poilizzi wrestled in front of 70,000 people at the Georgia Dome during the 2011 Wrestlemania XXVII, and Farley, Pivarnick and Ronnie Ortiz-Magro picked up a few matches, not against each other, on TNA Wrestling in 2010 and 2011.

Guadagnino has not wrestled professionally beyond his grappling with Pivarnick over the years on the show. He better watch out next week. Clayton looks like he means business.

Subscribe to app.com for the latest on Jersey celebs.