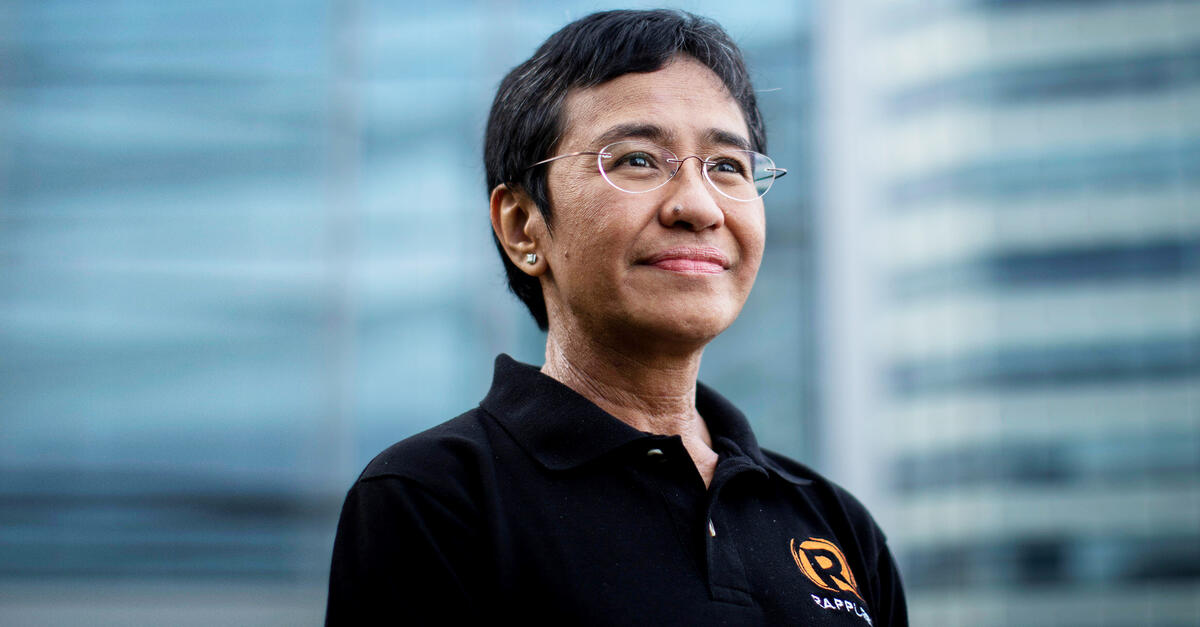 Startup founders often face obstacles during the first years of their companies. Then there’s Maria Ressa, the co-founder, CEO, and editor of the Philippine digital news website Rappler, who has been targeted by her government and faces legal action because of her company’s investigative journalism.

In honor of her “efforts to safeguard freedom of expression, which is a precondition of democracy and lasting peace,” Ressa won the 2021 Nobel Peace Prize, sharing the award with Russian journalist Dmitry Muratov.

This year’s Nobel Peace Prize highlights journalists under attack, Ressa said in a talk last week at the Legatum Center for Development & Entrepreneurship at MIT. Murders of journalists are on the rise around the world, and in the Philippines alone, 21 journalists have been killed since Philippine president Rodrigo Duterte took office in 2016.

At Rappler, Ressa and her colleagues have shed light on issues including Duterte’s war on drugs, which has included extrajudicial killings, and how the Philippine government uses social media to spread disinformation. Ressa faces a variety of charges from the government, including tax evasion and libel, which her supporters say is retaliation. She is currently out on bail after being convicted of cyber libel.

During her talk, Ressa, a digital fellow at the MIT Initiative on the Digital Economy, shared how a crisis can be an opportunity, and other lessons from building a new company amid opposition.

How to create something from nothing

Ressa was an investigative reporter and Southeast Asia bureau chief for CNN, and later headed the news division for ABS-CBN, the largest media company in the Philippines. As she watched technology change, she started to think about new business models, and founded Rappler with three other veteran journalists in 2012.

The media company Rappler lost 49% of its advertising revenue in the four months after the Philippine government tried to revoke its license to operate in 2018.

“I realized that the things that make traditional news organizations succeed are not going to help them succeed in the new world,” she said. “Legacy systems take a long time to replace, and legacy culture is corrosive. We set up Rappler precisely because I felt like it was easier to start with nothing than it was to pivot.”

While the founders were all over 40, they “hired the smartest 20-somethings we could find,” Ressa said.

At her previous news organizations, technology was seen as an extra chore. At Rappler, it was baked in. The Rappler staff was outfitted with laptops and iPhones and developed ways to improve technology for mobile journalism such as creating metal cases and tripods for iPhones.

“That was the best part of starting with nothing, because you can create it,” Ressa said. “The most fun in those first few years was coming up with something really new by just putting bits and pieces together.”

In 2012, as the chief justice of the Supreme Court of the Philippines was being impeached, Rappler livestreamed the trial. At the same time, they mapped conversations about the case on Twitter, and tracked how they were started and spread.

How to change course in the face of opposition

In the beginning, Rappler was largely funded by advertising. But when the company started to come under attack from the government, Ressa said advertisers were “the first to get scared, and they’re also the first to get phone calls. And then, you become kryptonite.”

Four months after the government tried to revoke Rappler’s license to operate in 2018, it had lost 49% of its advertising revenue.

“Probably if we only relied on that advertising stream, we would’ve gone bankrupt by the end of that year,” Ressa said.

Instead the company pivoted by looking at what they were good at. Rappler realized that they had extensive research in disinformation networks, including a database of publicly available posts, and that information was valuable to other companies. Within two months Rappler developed a new diversified business model based on exposing networks of disinformation for people or companies under attack. Rappler is also one of two Filipino fact-checking partners of Facebook.

How to face personal attacks

While Ressa said she initially embraced social media, she later saw it weaponized — including by Duterte, who used it to attack opponents. When Rappler started to look at Duterte’s actions as president and his use of social media, Ressa found herself under attack, too.

Prepare for the worst, embrace your fear, and look at crisis as an opportunity.

“I saw it personally. You don’t really know what an information operation is like on social media until you are attacked. Think 90 hate messages per hour,” she said. “When you’re attacked, you also see it evolve over time.”

Facing these attacks and legal action, Ressa relied on lessons she learned when she was growing up as an immigrant in Toms River, New Jersey.

“I learned that the first battle is in your head,” she said. “That lesson is embrace your fear. Whatever it is you’re most afraid of, you think about it, you imagine it, and then you figure out how you’re going to deal with it.”

At Rappler, that meant drills to practice what would happen if police came to the offices and the company had to shut down.

“We broke it down for every single person in the room, what are you going to do step by step, and we drilled it so it’s muscle memory,” she said.

Personally, Ressa and the other founders find strength in each other, and their team.

She also turns to others in the same fight, like the family of Maltese journalist Daphne Caruana Galizia, who was killed by a car bomb in 2017.

“We gain courage from each other to keep pushing for justice,” she said. “I have learned so much … Prepare for the worst, embrace your fear, and look at crisis as an opportunity.”

Exclusive! People felt what will a guy like me, who is an adventure seeker, know about business: Rannvijay Singh on hosting Shark Tank India