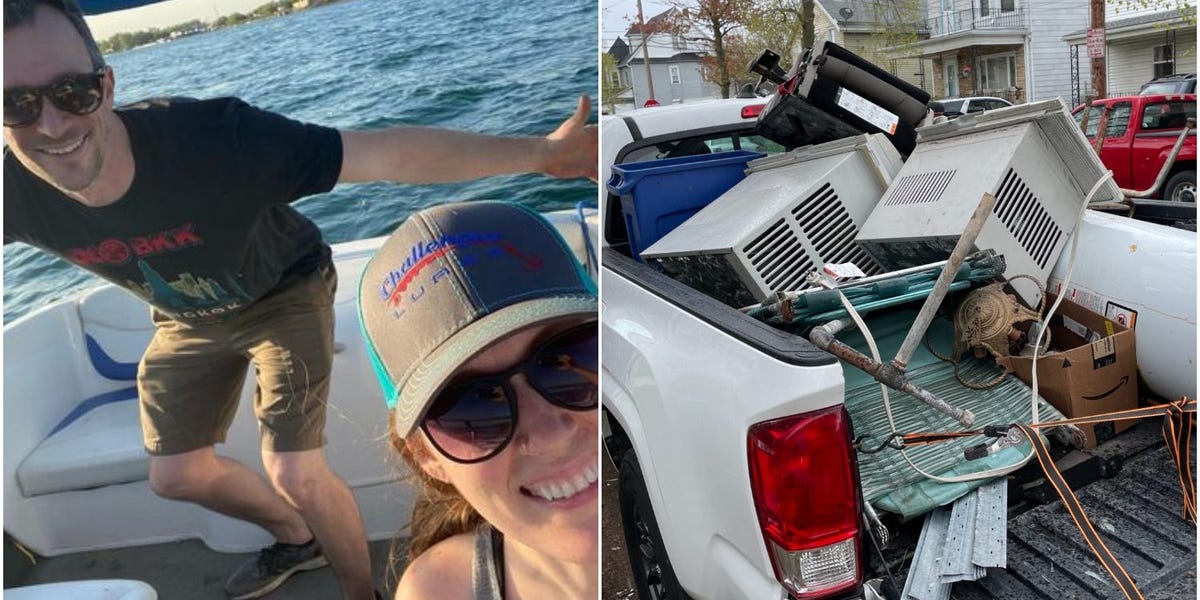 When Erin and Dave Sheffield are not busy with their full-time jobs, they’re rummaging through garbage.

The couple from Buffalo, New York, have been dumpster diving for more than 10 years and are now making an average of $3,000 a month from selling the items they find in the back lots of large depot stores.

“Especially in the time we live in, you kind of have to realize that if you don’t take that thing out of the trash, that’s going to a landfill,” Erin told Insider. “But also, you can actually make money.”

Read more: The 23 best side hustles to start that could earn you 6 figures or more, and how to get them off the ground quickly from experts who have done it

The Sheffield’s are part of a growing number of people who have taken the plunge into dumpster diving.

But while many have started dumpster diving during the pandemic, Dave and Erin have been at it for many years.


Both of them started searching through garbage while in college after friends showed them just how many perfectly intact items students were leaving behind at the end of the semester.

But it wasn’t until they got together — naturally, the two first met by a dumpster — that they decided to make an additional income out of their hobby.

“When I met Dave, I realized you could sell stuff. If we found a bunch of brand new clothes with tags on them, we would try to sell them. And then if they gave us around $20 or $40 or something small, we would be really really excited,” said Erin, who works as a care coordinator for people with developmental disabilities.

Dave, who runs his own manufacturing business, has spent the last few years optimizing his dumpster diving techniques and increasing efficiency.

He has made a map of all the different dumpsters across the city and knows which ones usually have the “best” items. He visits these at least twice a week.

“I basically have a few different routes and know the different areas of the city with ‘good’ dumpsters so that I don’t even go to new dumpsters anymore. I just go to the ones that I know will have something,” he told Insider. “So the longer that you do it, the easier it gets, and the less time you have to put in, and the more money you make.”

While most of the items they find are re-sold on eBay and other online retailers, Dave told Insider that a third of their dumpster diving money comes from selling scrap metal.

“It’s like seven cents a pound, which initially might not sound like a lot. But if you have loads of it … you can work your way up to like 40 bucks a day,” Dave said.

Some items the couple found in dumpsters.


“The way that I always thought about it is if I’m going to go dumpster diving for a few hours, the scrap metal that I find kind of pays for my gas and my like minimum wage. But the rest of the stuff I find and resell on eBay is just kind of gravy on top,” he added.

Some of the most valuable items both Erin and Dave found in the garbage include a (real) Prada purse which they sold for $500, and a truck-worth of college textbooks which brought in $1,000 profit.

But the couple said they’ve now become a bit picky about what they do take back with them.

“Anything that looks relatively new or looks expensive, or has a part number or a UPC like a barcode, you can really easily look it up on eBay,” Dave added.

When they stumble upon unopened food items, the couple usually takes some home or gives it away to friends or neighbors.

“For me personally, it’s more about I’d much rather see the items used and taken by people who want them,” said Erin. “Some of the items that Dave sells online, we would probably have a hard time just getting rid of. So we definitely don’t price competitively. We price to sell.”

Erin Sheffield poses with some food items the couple found.


The couple recently bought a small boat from their savings and plan to keep dumpster diving. They hope that other people will follow suit.

“We can’t possibly come close to even touching the amount of good stuff that’s thrown away every day,” said Erin. “Even if we went out from sun-up to sundown, and went every place we could think of, we still wouldn’t get close to what is being thrown away in our city.”