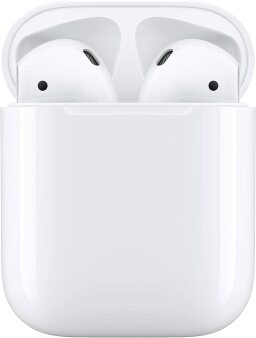 SAVE $69.01: Amazon and Walmart have both revived the latter’s (all-time low) pre-Black Friday price on the Apple AirPods 2. Head to either retailer to grab a pair for just $89.99. That’s a 43% savings.

If you’re OK with writing an IOU to your Secret Santa, you can gift a pair of Apple’s AirPods for well under $100 this holiday season.

As of Dec. 16, Amazon and Walmart were both selling the excellent AirPods 2 for a mere $89.99, or 43% off their $159 MSRP. That’s an exact match of the former’s pre-Black Friday price (their lowest price to date, in fact), which popped up during its second Deals for Days event in mid-November and hadn’t been seen since. Welcome back, friend.

Apple’s got a ton of new products coming next year, report says

These are the second-gen AirPods with the wired charging case, FYI; they came out in March 2019 and promptly received a Mashable’s Choice Award upon their release. Former tech reporter Ray Wong was a fan of their speedy switching between other Apple devices, hands-free “Hey Siri” voice controls, and long battery life — that charging case can get you over 24 hours of total listening time. (You can read his full review here.)

As far as shipping times go, Walmart could get a pair on your doorstep the fastest: We saw delivery dates there as soon as Dec. 28 at the time of writing, while Amazon’s were sitting in the Jan. 7 to 9 range. On the plus side, they ship for free no matter where you buy them.