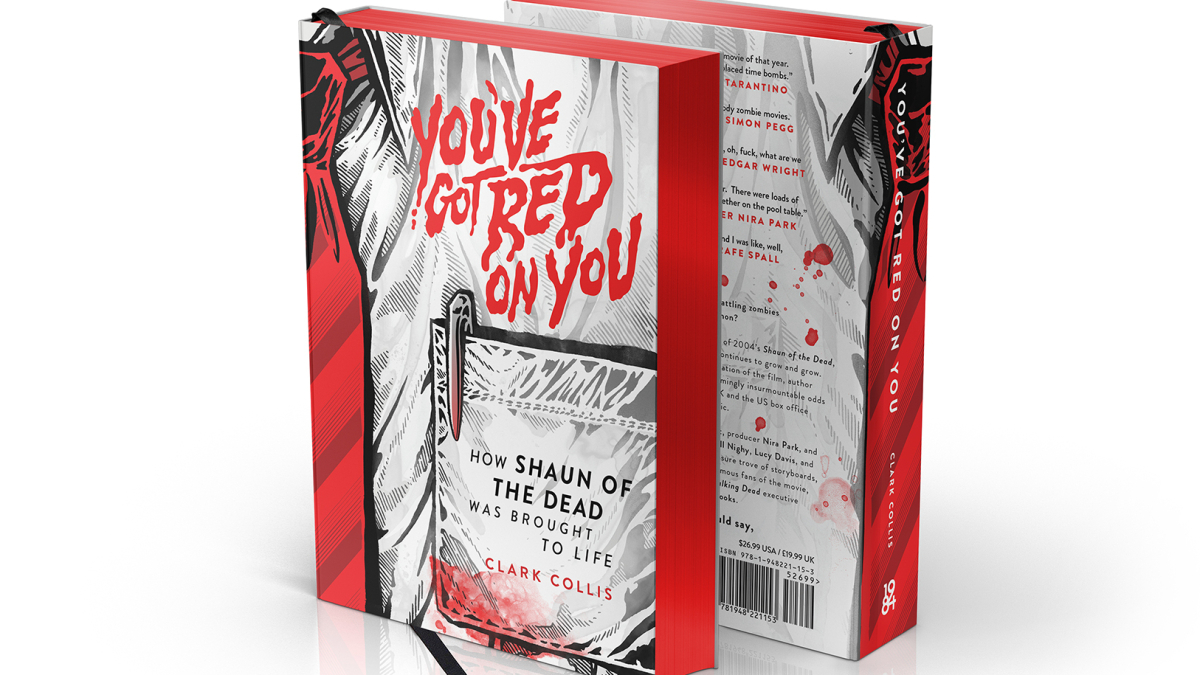 If you’re a fan of director Edgar Wright’s 2004 zombie comedy Shaun of the Dead, you need to check out Clark Collis’s upcoming book You’ve Got Red On You, an in-depth look at the making of the pop culture phenomenon.

The book features everything a Shaun of the Dead superfan could possibly want, including interviews with Wright, producer Nira Park, cast members Simon Pegg and Nick Frost, and many others. Also included are storyboards and rare behind-the-scenes photos of the cast and crew at work.

For author and superfan himself Clark Collis,You’ve Got Red On You was a passion project a long time in the making.

“I grew up in the small English town of Wells, the same place where director Edgar Wright comes from, so he’s someone whose career I kept an eye on right from the start,” Collis told Mashable. “Luckily for me, he has over the last couple of decades established himself as one of the most talented and distinctive cinematic voices of his generation. As a diehard horror fan myself, I loved Shaun of the Dead when it came out and over time have come to appreciate it more and more. I was also aware that the creative team behind the film, notably Wright, Simon Pegg, Nick Frost, and producer Nira Park, were longtime friends when they made the movie. I thought the story of their struggles to make Shaun of the Dead, and their ultimate success in attracting a global audience of fans, would make a compelling read. I like to think I was right.”

To learn more about how Wright, Park, Pegg, and Frost made Shaun of the Dead, read an exclusive excerpt from You’ve Got Red below, detailing how the film’s iconic record-throwing scene came to life.

You’ve Got Red On You by Clark Collis

From Chapter Six: Shoot of the Dead

Wright and Pegg’s script called for Nick Frost’s Ed to throw vinyl records from Shaun’s collection at the two garden zombies, in a hilarious (if futile) attempt to follow Jeremy Thompson’s advice to destroy their brains. The screenplay’s references to previous horror films aside, the duo had decided that the movie would be mostly free of the pop culture shout-outs that had suffused Spaced. They made an exception for the records that Ed hurls at the zombies, though, records about which the two writers had opinions. The first disc thrown by Ed is the dance anthology Crucial Electro, a record owned by Pegg, while the next is an original pressing of the 12-inch single “Blue Monday” by Mancunian dance-rock legends New Order. After that, Ed starts to list the Prince albums in Shaun’s collection. Shaun refuses to risk the destruction of either Purple Rain or Sign o’ the Times, but does allow Ed to chuck the rock star’s soundtrack for Tim Burton’s Batman. “I have a complicated relationship with that album,” says Wright. “I think it’s the first Prince dud. I like “Batdance” the song, but I do not like Batman the album.” Another LP that Shaun steadfastly refuses to let Ed throw at the zombies is The Stone Roses’ acclaimed self-titled debut, and he also convinces his friend not to launch the band’s much-maligned follow-up The Second Coming, a favourite of Pegg’s. Still, Ed does throw an album by Dire Straits, as well as Diamond Life, the 1984 release by Sade, the band fronted by singer Sade Adu, which he hurls at the ghouls after Shaun reveals that the album belongs to Liz.

Whatever you do, don’t throw “Purple Rain”
Credit: Oscar Wright

It was the responsibility of production manager Karen Beever to get the necessary clearances from artists to use the album covers seen in the film. When Beever had trouble getting permission, she and Nira Park recruited Pegg to write a personal letter to the act in question. “There’s a traditional way of doing it, but we didn’t really know that,” says Park. “We did it our way, which was never to take no for an answer, and contacting people direct, and writing passionate letters rather than going through management. Simon is just the best at writing those. You could employ him to do that. It’s a real skill.” Even so, Pegg was unsuccessful in securing the blessing of Dire Straits frontman Mark Knopfler. “We definitely didn’t get clearance from Dire Straits,” says Beever. In the finished film, the artwork of the unnamed Dire Straits album thrown by Ed would not be visible, though audiences would clearly see the cover of Sade’s Diamond Life. “Simon wrote this letter to Mark Knopfler,” Wright remembers, “and obviously it’s a tough thing to get someone on board [by] saying, ‘We want to trash your album!’ Mark Knopfler said no. But Sade said yes. Sade, who I’ve never met, signed her release and was down for it. To me, she’s the coolest person ever. It’s like, you don’t know us from Adam, we actually break your record in the shot, and you let us clear your likeness. That’s amazing.”

Wright and Pegg knew it was unlikely that Prince would give permission to show the covers of his albums in the film, and wrote an alternative version of the scene, in which Shaun and Ed considered which David Bowie release was bad enough to use as a weapon. “It was like, you know, ‘Aladdin Sane? Hunky Dory? The Labyrinth soundtrack?’ ‘Throw it!’” says Wright, a diehard fan of the rock icon. “We enquired about David Bowie, and I think his PR guy said, ‘Mmm, David’s a bit funny about Labyrinth.’ So we changed it back to Prince.”

Frost and Pegg had rehearsed the record-throwing sequence with Cunningham and Donovan at Ealing Studios prior to the start of the shoot. They had even performed trust exercises in which the two pairs of actors took turns throwing prop records at each other. Still, Donovan was injured by one of the flying discs during the actual shoot. “One of the first times Nick threw one of the records, he did it from far too close and it hit me,” says the actor. “I had one eye that was covered by the [prosthetic] piece that I couldn’t see out of. I had a contact lens in the other one that took the vision down to about 5%. So I couldn’t really see what I was doing. The record hit me right in the eye with the contact lens. Because it was travelling at speed, and it was rubber, it was like being hit by a potato in the eye. It was the one time in my life where I’ve actually stopped a take. I literally saw birds flying around. Nick was so upset. He said, ‘Oh, I’m so, so sorry!’ I was like, ‘Oh, it’s fine, it’s fine.’ I was going to wind him up the following day by coming in with an eyepatch, but I couldn’t find one in time, so I had to let that slide.”

You’ve Got Red On You by Clark Collis is in stores now in the UK and out Nov. 23 in the US.