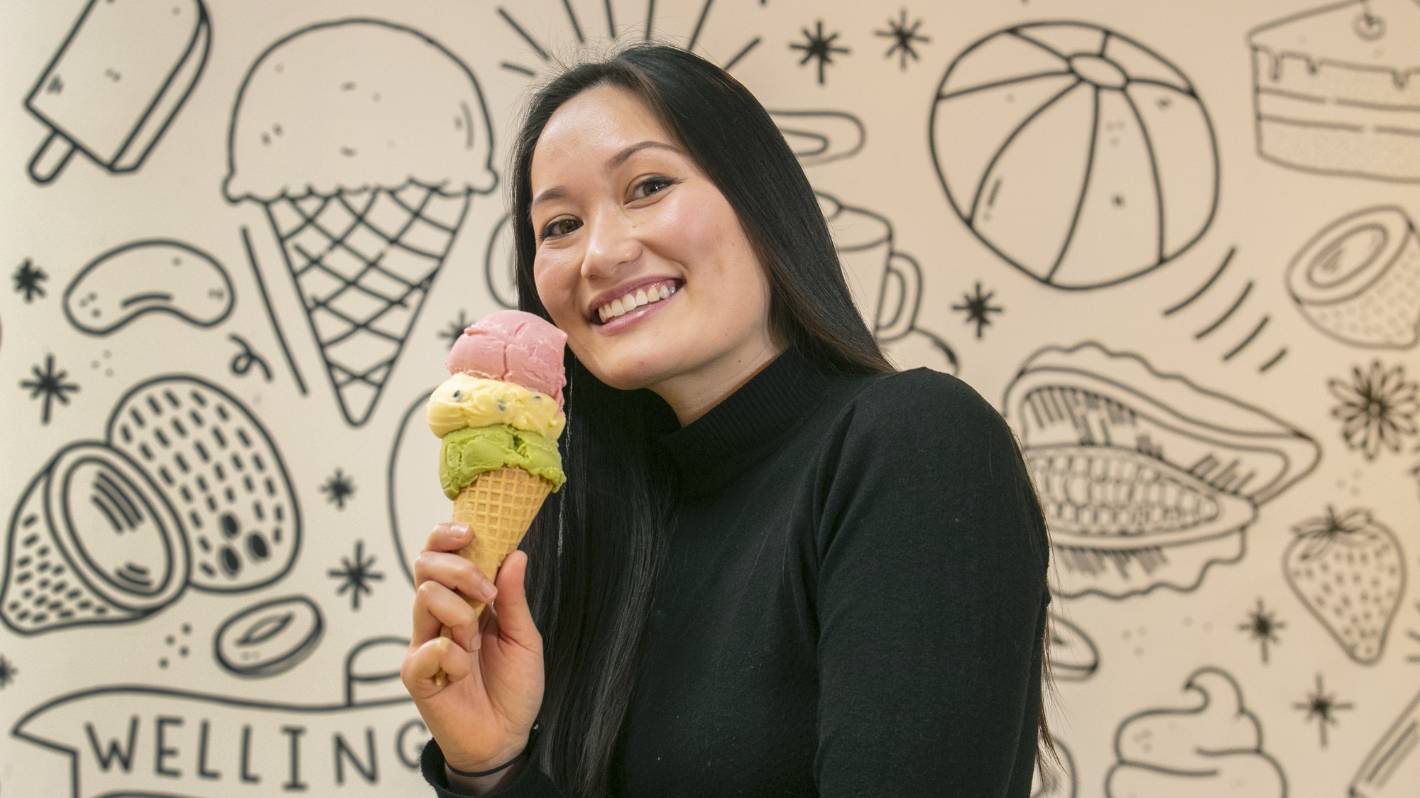 In the Philippines, her grandfather ran his own restaurant and after going to a chocolatier course in Melbourne with her dad, Alberto​, the family set up its own gelato and sorbet company called Zelati in 2009.

With a lab in Tawa, the family initially sold their products wholesale.

But Tuason said she always thought they could do so much more and wanted to bring their gelato to the public.

With Tuason’s father stepping back, the 26-year-old oversees the entire business.

Wanting to build up her business skills, in 2018 she took part in a free 10-day course set up by social enterprise Rebel Business School Aotearoa. Created in 2017, the school’s programme was brought to New Zealand from the United Kingdom and its main aim was to provide people who were struggling to find work opportunities, some skills to help them start or grow businesses.

“There were a lot of workshops, and I was given resources and connections to build the business further,” she said.

Zelati’s dessert cafe is on Left Bank off Cuba St.

It also encouraged her to focus on building the company’s website and connecting with local councils when it came to events.

She wants to include more plant-based products for Zelati and, with Wellington On A Plate coming up, hopes to have more Filipino-inspired dishes on the menu.

Tuason took part in the 10-day Rebel Business School course in 2018, which helped with resources and relationship building.

Tuason was also looking to expand the business with more dessert cafes.

Her advice for people with business ideas? “Don’t be afraid to start now. Take the leap.”

Terence Hikawai, who describes himself as a “complete noob” in business, says the course has helped him feel motivated and confident.

Hikawai was once a broke university student and that’s what inspired one of his business ideas.

“I was sitting somewhere and all I was thinking was that I needed to go to Countdown and then New World to compare the prices,” he said. “That’s what did it for me.”

Turning his idea into a phone app called CheapKai!​, he said it would compare prices between different supermarkets and dairies.

Although the app was still in the works, it was a jumping board for a bigger business idea, launching Pūtahi Innovations Limited​, a think-tank for like-minded entrepreneurs through a kaupapa Māori approach.

Terence Hikawai is working on an app called CheapKai! which helps compare prices between different supermarkets and dairies. (File photo)

“Initially, I didn’t fully understand all the moving parts of creating a business, I had a great idea that I knew would help my community, but the infrastructure and support to commercialise this was non-existent,” he said.

Wanting to keep the momentum going but also needing direction, Hikawai, of Lower Hutt, said he signed up to the 10-day business course during lockdown.

Describing himself as a “complete noob” in business, Hikawai said the discussions and presentations along with homework, gave him clarity and self-motivation.

“It also gave me better ideas because I was able to talk to mentors, staff and also other people on the course. I feel a lot more confident a lot more informed.”

The school’s founder, Tony Henderson-Newport​, said his experience in the United Kingdom cemented in his mind that you didn’t need a mountain of money to get a business moving.

“There is an untapped source of fresh ideas and knowledge coming from the perspective of the underdog – we want to help showcase this. It’s all about helping people get into business who never thought they had a fighting chance,” he said.