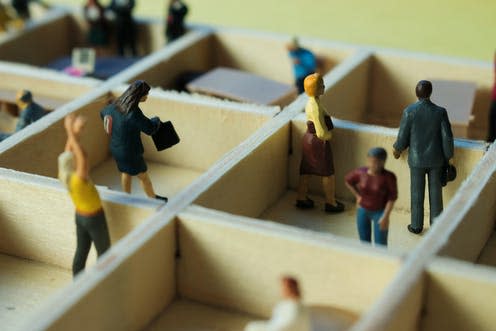 The UK continues on its path to economic recovery from COVID. According to the latest survey data from the Office for National Statistics, the proportion of companies seeing their turnover reduced by COVID in July 2021 was just 29%, compared to 65% in June 2020. That’s the lowest level since these surveys started in the same month.

This is what you would expect with the lifting of COVID restrictions. We are seeing predictable winners and losers – international travel and high-street retail are still getting back on their feet, for example, while Amazon and other home delivery businesses roar on.

But this narrative is missing something important. For many businesses, recovery will depend on rather more than just restrictions being lifted. The ability of businesses to innovate after a pandemic can be hampered for years after – and no one seems to be talking about it.

As part of the COVID restrictions, people were told that everyone who can work from home must do so. One important question was how this has affected productivity, which is a standard determinant of GDP growth and wages. The UK’s productivity growth has been in decline for years, so anything that prevents it from getting worse would be worth pursuing.

Whether remote working would achieve this was debatable, however. Academic research published years before the pandemic pointed to clear productivity gains when people work from home. But the Organisation of Economic Cooperation and Development (OECD) published a paper in September 2020 indicating that the overall effects would be negative, and a Bank of England working paper from December agreed. If so, it’s bad news that many believe that remote working will never go away entirely.

A laptop with a Zoom meeting in progress

So why would productivity be weakened by remote working? One key reason could be that productivity is affected by our ability to generate ideas. The more that businesses come up with new innovative ideas, the more a nation’s economy is able to produce.

Creativity in the workplace requires not only creative people, but group thinking. Research indicates that being in a social environment affects both the amount and frequency of our ideas. This can happen anywhere from a formal meeting to knocking around ideas over a sandwich to queuing next to a colleague in the local coffee shop. The fewer the opportunities for social interaction, the poorer the ideas that we come up with.

This goes to the heart of the Austrian economist Joseph Schumpeter’s notion of “creative destruction”. It explains how economies grow as a mostly evolutionary process, in which new ideas replace old ones. If you weaken the flow of ideas, you’ll get stagnation.

The threat to the UK

It might be tempting to think that ideas are overrated, and that consumer demand determines what new products come on the market. But it’s often the other way around.

For an eloquent explanation of this, take a look at the famous scene below from the Devil Wears Prada, where fashion mogul Miranda Priestly (Meryl Streep) gives new assistant Andy Sachs (Anne Hathaway) a frosty lesson in how the clothing industry works. This is prompted by Sachs sniggering at the fuss being made over choosing between two belts that she thinks look very similar.

Priestly picks on her “lumpy blue sweater” by pointing out that it’s not just any shade of blue, but a cerulean blue that originally came from a collection of gowns by Oscar de la Renta. He was then copied by numerous other designers before it filtered down to the high street and sold as millions of items of clothing. The point is that ideas can be replicated by a large number of firms, effectively creating a multiplier effect in terms of economic growth.

I recently co-published a paper into how innovation is affected by pandemics. By analysing the effect on patent applications within the world’s leading economies of previous pandemics like the Spanish, Hong and Asian flus, swine flu and encephalitis, we concluded that it takes approximately seven years for innovation to recover from a pandemic shock.

It takes an average of two to three years after the pandemic for the shock to be felt on the ideas pipeline, as companies enter the pandemic with an existing list of ideas under development. From there, it remains depressed for four or five years.

More research-intensive sectors are disproportionately affected. And if this is the effect of taking people out of the workforce and preventing them from interacting in the usual way, the prospect of remote working being semi-permanent this time could make the damage even worse.

Incidentally, this should be of particular concern to the UK. According to the WIPO Global Innovation Index, the UK is currently fourth in the world in “innovation output”, meaning the extent to which ideas are turned into sales.

The lifting of the restrictions is a great opportunity to get the “ideas economy” moving again. The UK and other governments would be well advised to give extra assistance to firms that are particularly important to R&D, being mindful of the timescale over which this threat plays out. They should also invest to make patent offices as efficient as possible, and to set up more spaces that are purely designed for people to come together to develop ideas.

What governments must not do is to look at the latest promising recovery numbers and think that everything is getting back to normal – they need the bird’s eye view not the worm’s eye view. The UK is facing a slump in the creation of ideas that will slow down economic growth, and be made worse by remote working. Getting it right is a marathon, not a sprint, and it needs to be an urgent priority.

This article is republished from The Conversation under a Creative Commons license. Read the original article.

Thanos Verousis does not work for, consult, own shares in or receive funding from any company or organisation that would benefit from this article, and has disclosed no relevant affiliations beyond their academic appointment.