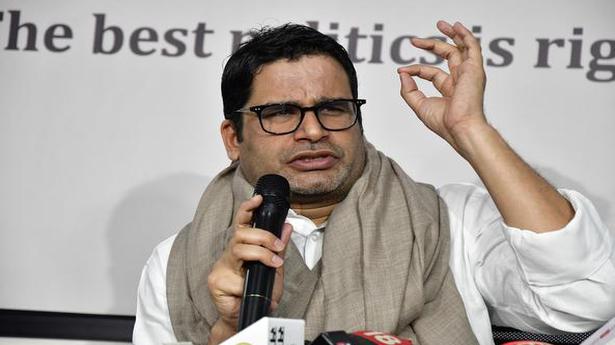 Insiders ask, how far can a political party go with external agencies in fighting elections?

The leaked contents of a virtual meeting between election strategist Prashant Kishor and senior journalists has triggered a debate within a section of the Congress party on the question of how far a political party could go in engaging with an external agencies while fighting elections.

The internal debate is also prompted by the party’s experience in Tamil Nadu, where Mr. Kishor’s organisation, the Indian Political Action Committee or I-PAC, advised the Dravida Munnetra Kazhagam (DMK), which heads an alliance in which the Congress is a junior partner.

Congress insiders claim they were witnesses to a “sense of disquiet” among senior DMK leaders as “core political activities” were decided by the external agency.

The Congress’ Data Analytics chief, Praveen Chakravarty, who makes sense of the numbers for the party to help devise strategy, questioned the commitment of “external” agencies in terms of ideology.

“If a political party outsources its election fighting to a commercial external vendor, then it leads to the eventual destruction of the very idea of a political party, [which is] building a cadre based on ideology. These vendors’ main objective is profits and they circulate strategic information, data, and knowledge of one party to another,” said Mr. Chakravarty.

The question is important as, recently, Punjab Chief Minister Captain Amarinder Singh re-engaged Mr. Kishor, who had advised Mr. Singh earlier, as his advisor, and offered him the rank of a Cabinet Minister.

The debate is also important as it could decide the party’s strategy with regard to Uttar Pradesh elections, scheduled next year, based on the feedback from the current round of elections.

For example, in the recently concluded Assembly elections in Assam, irrespective of the outcome, the Congress has put up an impressive fight in the last two-and-half-months through a strong campaign, which included the offer of five guarantees and, among them, 1 lakh jobs.

Congress’ publicity in Assam was handled by DesignBoxed, which was earlier engaged by the party for the Chhattisgarh elections.

“Yes, we had our organisation, but the external agency managed to enthuse our workers, channel them, and create a buzz. Communication is a specialist job and in today’s day and age, it should be handled by people who are the best in the field,” said Debabrata Saikia, Leader of the Opposition in the outgoing Assam Assembly, said.

Mr. Chakravarty agreed that communication, making videos, or even image makeovers, for individual leaders, was best done by outside experts. “But one cannot replace party cadre with paid professionals, or allow strategic decisions such as alliance, candidates, seats, etc., to be taken by them,” he added.