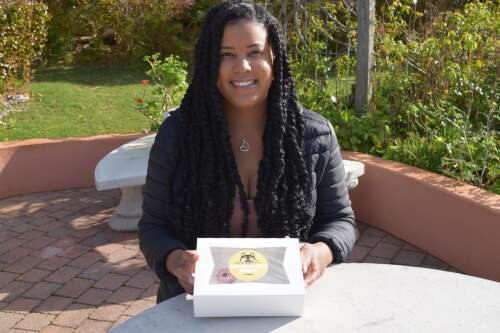 Box of treats: A dog customer receives one of the first batches of dog baked goods from Impawssible Treats (photo included)

A dog enjoying a snack from Impawssible Treats (photo supplied)

Bermuda dogs no longer have to beg, borrow, or steal their favorite pastries. You can now order them via the Sargasso Sea app.

“I wanted to start my own business last year,” said Ms. Roberts.

Before that, she worked in the hotel industry in nightclubs, restaurants and bars for several years.

“I wanted more freedom in my life instead of working for someone else,” she said. “I am a great traveler. I have been to 12 different countries alone in the past two and a half years. That’s what I want to do in the long run, but it’s difficult to do for someone else. I thought it was time to take the plunge. “

She played around with different ideas but for one reason or another they didn’t work out. Then the answer came to her during an internet search at 1am.

As she explored the idea further, she learned that many popular pet bakeries in the United States were making things that would be seen in a human bakery with pet-safe ingredients.

“I thought I could totally do it,” she said.

She designed her own logo and bought appliances such as a food processor and blender from International Imports in Hamilton.

“I just had to buy gluten-free flour,” she said. “Then I just started baking.”

But she still has a few problems with baking.

“I had two orders on Friday and I started at 4pm and didn’t officially end until 11pm,” she said. “It was just the fact that I only have one mixer. I had to wash it out all the time. And I had three different colored doughs that I worked with. I think I need to get more gear. “

She is the delivery driver for Sargasso Sea and therefore understood the process for selling products on the website.

“It took me about a week to get me to Sargasso,” she said.

Ms. Roberts was really happy to receive a photo of her first dog customer enjoying her mini donuts with Greek yogurt frosting and unsweetened coconut flakes.

“A friend of mine ordered something for her dog,” said Ms. Roberts. “When she sent a photo, I thought, okay, the dog is not dead. (Laughter) That’s great! And my girlfriend said the treats smelled really nice and she wanted to take a bite too. “

As much as she enjoys baking for the dogs, she doesn’t own a dog herself. She always wanted one, but her parents didn’t. Now she has two cats.

So far, her cat friends have not been impressed with her baked goods.

“I gave my cats some of my ‘pupcakes’ and they turned their noses up,” she said. “They just played with it and beat it. But I plan to make cat treats in the future. I think I would make them mostly out of meat. “

So far she is optimistic about her new business.

“There’s definitely a place in the market in Bermuda,” she said. “Personally, I don’t know anyone who does that. I know people who make pet cookies, but nobody who makes donuts and cupcakes. I have ideas for apple pie creme brulee for dogs. “

Ms. Roberts said the canine version of creme brulee would include yogurt and monk fruit.

“Then you just torch it off,” she said.

She tries to avoid sugar and grains in her dog products, and some of her baked goods are dairy-free too.

“I know some dogs are sensitive to this,” she said. “My ingredients are always listed so that owners can make the best choices for their dogs.”

It’s doing well in business and could expand to other items like bespoke pet collars.

Deliveries of Impawssible Treats are only made on Saturdays. More information can be found in the Sargasso Sea App or on Facebook @impawssibletreats or by email at impawssibletreats@gmail.com.