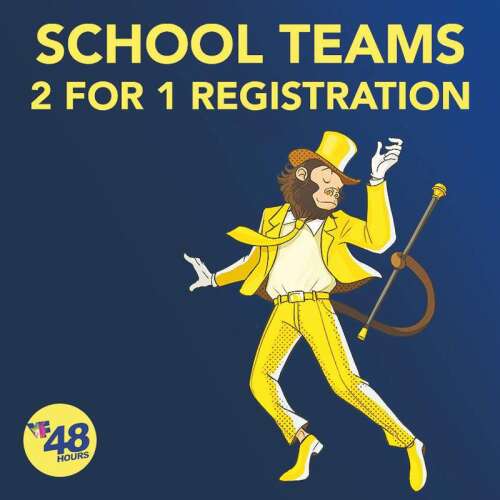 But hurry because you only have 48 hours.

Every year hundreds of budding filmmakers reach for their cameras and, in just 48 hours, shake ideas out of their heads to write, shoot and edit a short film.

Some of them are great, some are good, and some are different.

Tom Paton has been running the Gisborne event since 2015 and says it’s a great opportunity for folks on the coast to get into serious filmmaking.

“It’s a chance for locals to flex creative muscles to an audience.

“It really is the only thing you can do about filmmaking in Gisborne to get your name out there on a national stage.”

The filmmakers are only told at the beginning of the competition which genre they have to make a film about. All creativity: writing, recording, editing and adding a musical soundtrack must be done within the 48-hour window, which starts at 7pm on Friday and ends at 7pm on Sunday.

Scattered over the high-intensity madness are “random elements” that can be lines of dialogue, an additional prop or a strange character.

Naturally, the ethos of the festival is to impose restrictions on teams in order to encourage creativity in a short period of time.

If 48 hours wasn’t enough, the festival had a special lockdown edition last year after the normal event was canceled due to Covid-19.

With folk at home, the competition had the highest number of entries of all time with 1208 films submitted.

Over the years, over 6000 shorts have been produced for 48 hours.

Tom says there’s a real boost to getting school teams involved and getting them a foot in the door of the film industry.

Schools even get two for a discount for every team that signs up.

Tom says the festival is a great way to dip your toes in the industry.

“There are so many opportunities in big cities that it’s great to have something for Gisborne.

“There are really high-profile people who went through the program when I first went to Wellington in 2006. Taika Waititi was in my heat so there is some real talent coming through this festival.”

And a lot of that Gisborne talent comes from our schools.

“A couple of years ago a school team won the regional final in Gisborne and a school team actress was nominated for the national best actress award.”

The festival began in 2003 as a side appearance at another film festival with only 44 teams from Auckland. Now the competition is in its 19th year and has teams spread across the nation.

“There is nothing like it on a national level and even more so on a regional level,” said Tom.

The last day for team registration is March 2nd.

Filmmakers, parents, and teachers can sign up at 48hours.co.nz and search for 48Hours Gisborne to join the local group on Facebook.

DIG YOUR CAMERA: Whether you have experience or not, grab friends and film. You never know where a short film can take you. Picture supplied